Steve's on the Bowery has closed, more 'glam fashionistas' on the way

In June, I spotted a retail listing for Steve's on the Bowery ... Agents remarked how this was a "prime retail location on the Bowery."

At the time, a worker at Steve's said that they'd be open through the end of this year.

Looks like they didn't make it until October. The rather grubby deli apparently closed yesterday, and workers were gutting the space this morning... 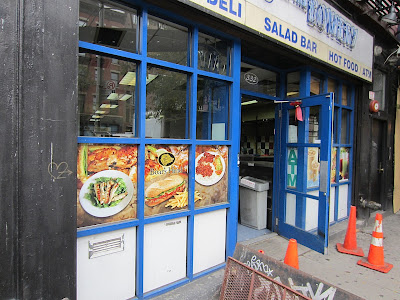 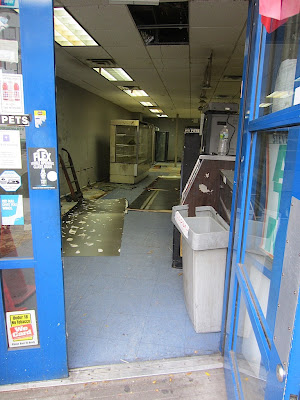 In August, BoweryBoogie had the scoop that the Intermix brand was taking over the Steve's space. The company describes itself as a "fashion boutique for trendsetters, A-Listers and glam fashionistas. We carry an exclusive mix of the best designers, styles and trends."

Curious what role the 7-Eleven across the street played in closing Steve's. The Bowery 7-Eleven opened on Dec. 23. Of course, the landlord knew that he or she could get a lot more $$$ from a big brand like Intermix than a store where single cans of beer in a bag were the hot sales item.

And a shot of Steve's with the gate down on Christmas morning, 2011... 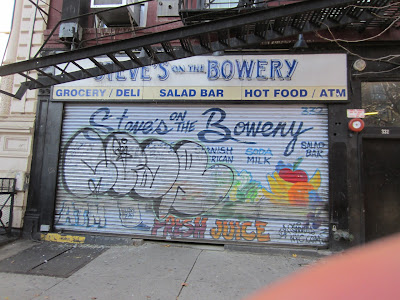 Email ThisBlogThis!Share to TwitterShare to FacebookShare to Pinterest
Labels: Steve's on the Bowery, the Bowery

Last week, while buying spanish food for lunch, I asked the girl at the counter of the buildings future. She shunned me, & told me it was all lies..... However, she did look worried.

Steve's was a rip-off from the beginning. It was not be missed.

In the 70s/80s this was my go-to place whenever I was at CBGB's for a concert, my friends and I would go in at 4 AM to grab a snack or a cup of coffee. I also remember the thick bulletproof Plexi the cashier sat behind, and the little window you pushed your stuff through to be rung up and your cash through to pay.

steve's sold food home made by locals and was the best and tasiest deal around. And they were really nice. Steve's will be very missed

I used to work next door. I wanted to love Steve's but they were always assholes to me. I don't know why, I always make friends with every bodega I frequent.

Eventually I had enough of their gouging me with changing pricing depending on their mood. Sometimes Snapple Lemon Tea was $3, other days $3.50 WTF.


Their closing is not at all surprising... sorry...

Intermix is the douchiest, most disgusting store ever. You think the neighborhood is bad now? Just wait.

Would much rather have Steve's.

Steve's will be missed because it was not a "glam fashionista" store. It was a regular (not gourmet) bodega with some really nice staff and the locals from the White House were always a trip. I used to go there often for snacks and their tasty coffee. Problem for me was them charging $15 for cigarettes when they are 12-13 everywhere else. Goodbye to Steve's and all the others who are pushed out bc they are not "luxury" enough for the new NYC

I will miss their homemade fried chicken sandwiches and their rice and beans. Those ladies who worked their were so friendly and asked me exactly how I'd like my sandwich. It's just so sad to know I'll never see them again and will now only tense up when I pass that nasty Intermix store knowing hateful bitches now reside there.

Blame the landlord's high rent in the place for any price gouging, not the bodega owner just trying to survive.

for me, the only reason steve's will be missed is because what will be in its place. that said, i am not sad to see steve's close. the only reason it lasted was because it was the only deli on the bowery for a long time. i wish it didn't get crushed by some sh*tty 7/11, but it was gonna get rushed nonetheless.

i think youre confusing survival for greed.