Here is your Nevada Smiths signage 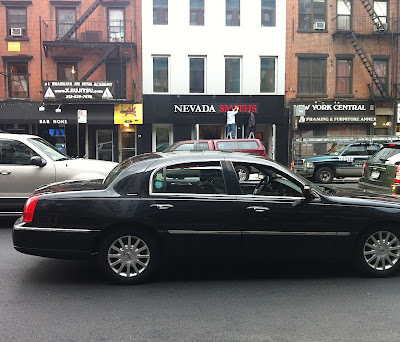 Yesterday afternoon, workers put up the Nevada Smiths sign at their new home at 100 Third Ave., as this photo by EVG reader Clive shows.

And here's a photo from this morning. You can't really tell how the sign glows from this shot. 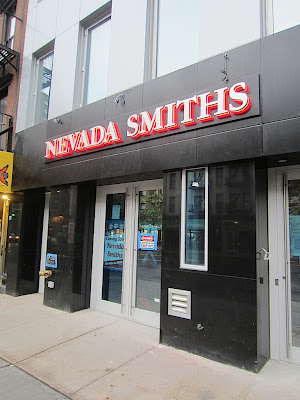 Back in July, Paddy McCarthy gave DNAinfo's Serena Solomon a guided tour of the new space between 12th Street and 13th Street. (You can read that here.)

A few highlights of the $3 million establishment:

The bar will broadcast soccer matches and other sporting events from around the world on 20 plasma televisions scattered throughout the space, as well as a pair of massive projection screens that measure 18 feet by 10 feet.

"It will be the only [television screen] you can see life-sized people on," said McCarthy, boasting that the projection screens are the biggest of any bar in New York City. The screens are so large, in fact, that a crane had to hoist them into the building through a window, with the job requiring an eight-man team.

Despite some concern from neighbors about possible quality-of-life issues (noise, public drunkenness, etc.) the CB3/SLA gang gave the green light for a license here on Sept. 10.

According to Grub Street, there were several stipulations with the passage, such as a 2 a.m. closing time on weeknights and 3 a.m. on Fridays and Saturdays. There's also reportedly a requirement that McCarthy must meet with residents monthly to address potential complaints.

Previously on EV Grieve:
Those persistent rumors about 74-76 Third Avenue and the future of Nevada Smiths

The East Village will lose a parking lot and gain an apartment building
Posted by Grieve at 6:15 AM