7-Eleven alert: Are 2 chain stores replacing Bar on A and Angels & Kings? 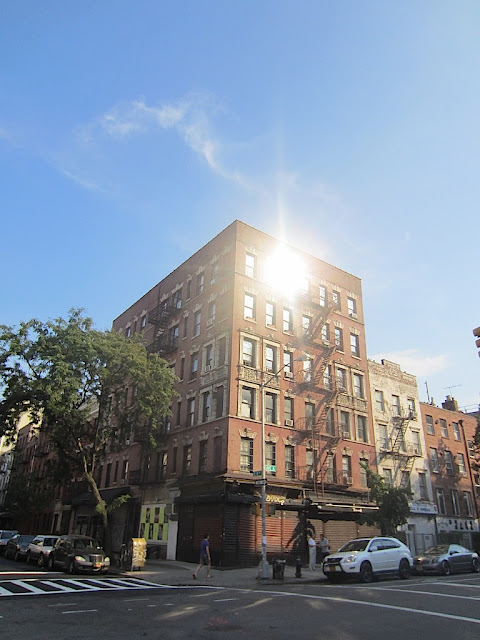 In recent years, when a business closes around here, it's inevitable that the Starbucks-7-Eleven-Subway rumor makes the rounds as a replacement.

We heard this after Graceland closed ... when 34 Avenue A was looking for a new tenant ... when Kate's Joint closed on Avenue B ... when 219 First Avenue had retail space available; ditto for the Copper Building retail ground floor — and so on. Sometimes it turns out to be true, and other times, it's just a rumor. Or something people use merely as a threat.

So we heard the Starbucks-7-Eleven-Subway whispers about the recently shuttered Bar on A at East 11th Street. In part, these rumors surfaced because Ben Shaoul of Magnum Real Estate owns the building ... and two of his East Village properties are now home to a Starbucks (First Avenue at East Third Street) and a 7-Eleven (Broadway and East 12th Street). On Monday, one of the construction workers gutting 170 Avenue A told told a reporter from The Local that a 7-Eleven was taking over the former Bar on A space. 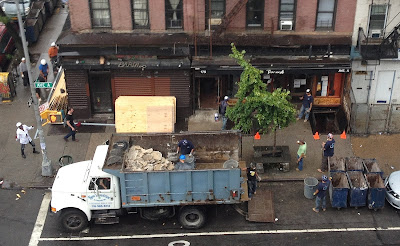 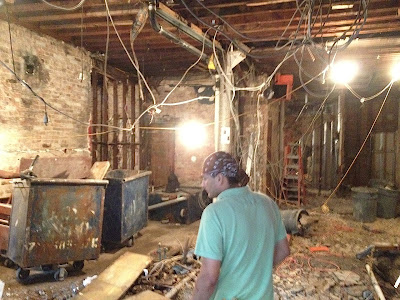 However, in addition, workers have cleared out Angels & Kings, Pete Wentz's onetime emo hangout behind Bar on A at 500 E. 11th St. (aka 170 Avenue A). According to the work permits for No. 500: "REMODEL EXISTING STAIR CONNECTING CELLAR AND FIRST FLOOR. REMOVE INTERIOR NON-LOAD BEARING PARTITIONS AT FIRST FLOOR." 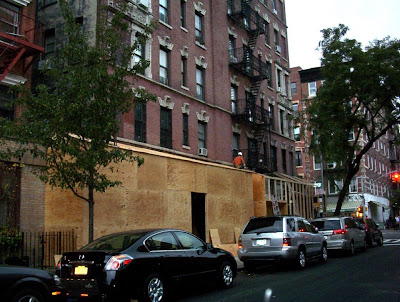 In January, the CB3/SLA gave the OK for the people behind Keybar on East 13th Street to take over the Angels & Kings space and open a bar-restaurant serving Hungarian food. No word on whatever happened to those plans.

However, there's nothing just yet on the DOB permits pointing specifically yet to a 7-Eleven, Starbucks or Subway. One connection: The applicant of record for both 500 E. 11th St. and 170 Avenue A is Bentonville, Ark.-based Harrison French & Associates, an architecture and engineering firm whose clients include 7-Eleven, Starbucks and Subway. (Harris French did the 7-Eleven on Broadway at East 12th Street and East 14th Street.) 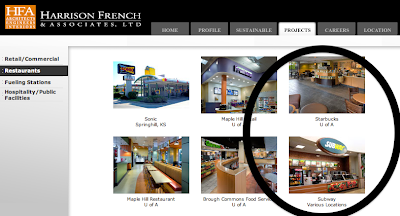 In any event, nothing official has been released about the corner's future. But given NYC's current retail environment, you may want to get ready for the first national, non-bank chain/franchise on Avenue A. And probably not the last.
Posted by Grieve at 6:50 AM

Email ThisBlogThis!Share to TwitterShare to FacebookShare to Pinterest
Labels: 7-Eleven, Bar on A, Ben Shaoul

I sincerely hope the resident who made Annie's life miserable with the constant complaints about "noise" is happy that a big FAT 7-11 is opening here!!

So 24/7 this resident can now do battle with every meth-head and crusty from the Park who will congregate here for the cheap food.Not to mention all the bargoers who will come up for 5 am shit food to sober up and eat outside.

Those are two separate addresses and examples. There was a Subway rumor at 34 Avenue A, which was last home to Aces & Eights. Then there was the Starbucks rumor after Kate's Joint closed. I tweaked the sentence for clarity.

I've lived in this neighborhood for 15 of the 25 years I've been in NYC and just by coincidence I was in Bar On A on their last night. Could not believe it. So now a 7-Eleven eh? Oh man, I knew the end was coming and that it was only a matter of time before some corporate bullshit entity would creep it's way over here. Mary Help of Christians church and flea market gone and now this. The place formerly known as the East Village is dead. They should call it something else now like LoFrat or TruFundVille. This is amusing and enraging at the same time. Amusing because some see this as 'progress', enraging because in reality it's not. Yeah, yeah. I know the other side of the argument: "New York City always evolves and changes". This is not evolution but de-evolution. All I can say is I'm glad I don't live on 11th and A because that 7-Eleven toxic fast food odor would make me sick.

Enjoy the mini-tacos and Big Gulps. And a big fuck you to the New-New York! What a betrayal. I'm leaving here as soon as practicality allows, I'm not kidding. This shit is OVER!

Whoa. I'm NOT paying all this rent money to live in SUBURBIA. I guess my time here is up. I will not live so close to this BS. It all makes me so sick. NEVER SUPPORT THESE CORP CHAINS. NEVER.

growing up i watched the old black and white twilight zone episodes, and used to be thankful for them because i thought because of them the human race would learn lessons so things that happened in the stories would not really happen. well...

this is a conscious effort by these companies to do exactly what they are doing.

Bring it ! I look forward to administering either/both DePinto or Schultz a severe smack down as their fellow CEO's watch in horror. Note to DePinto: Your microwaved eggs and push button cappuccino machines aren't going to cut it on Ave A. Note to Shultz: I am your kryptonite. I'll be waiting boys.

I'm very disappointed to see this happening on my block. I feel sick about it and will never patronize these businesses.

One person was not responsible for the demise of Bar on A. There were many noise complaints. They didn't adhere to posted hours for music and did not sound proof their space very well for tenants and didn't do anything to monitor patrons gathered on the sidewalk late at night. It was good that they were a venue for music and musicians, but they didn't do a good job with the noise.

I just took at look at the paperwork posted outside related to the work, and it listed a company, can't remember the name, "DBA [Doing Business As] Bar On A." Do you think someone bought the liquor license and is going to open up a larger bar or restaurant? If it was going to be a chain store, why would the registration for the work permits be listed this way? Whoever it is, I hope they are quieter for the sake of the neighbors. As the previous poster noted, it wasn't just one person being driven insane by the noise. We can't criticize the new joints in the neighborhood for torturing us then give a pass to the places that have been here for years.

These 7-11s make me ill. Bloomberg is taking "big gulps" out of what made our neighborhoods great. His hypocritical attacks on soft drinks don't apply to 7-11. He just kisses the FAT ASSES of corporations. Up yours, ugly!

In the words of Franz Liebkind: “Boy, when things go wrong!”

I have pretty solid confirmation that it is a 7 Eleven. No Starbucks.

(just letting it out there, which I'm sure will argue that...)

A 7-11 and shortly enough construction begins, of lord knows what, on the space that long held the flea market on the NW corner of 11th and A.
This section of Avenue A was one of the great little stretches of what remained of the East Village.
Nothing is sacred anymore and the last of the neighborhood's identity has been sold. Faceless, homogenized, and dull. Embrace the new Murray Hill South.

They are working fast on whatever it is. I don't think I've ever seen so many guys on a job like that.

A starbucks in Alphabet City would be faaaaaaaaaantastic.

I think this is the same demolition crew that sweeps through every few months to gut apartments prior to renovation. They are very fast and always clean up after. Can't say the same for the crews that do the renovations.

are people stupid? are people really gonna pay the prices you have to pay in this neighborhood to live with Subways and 7elevens everywhere? there is something so f**cked in an extraordinarily frustrating and irritating way. the world is burning the candle at both ends and laughing and talking on its iphone while its happening.

So let's do something about it. Let's get the 11th Street (Bet. A and B) Block Association back on line.

I grew up in Kew Gardens, NY and the 16 year-old me enjoyed going to 7Eleven for candy and Slurpees.

The 45 year-old me, NOT SO MUCH. Especially not on Avenue A.

I lived in the EV for 8 years and still work and play there, but most of these changes just HURT MY SOUL.