Porchetta.Hog quietly opened on East Fifth Street just east of Second Avenue back in May... And by the beginning of September, they were temporarily closed, as Slum Goddess first noted. 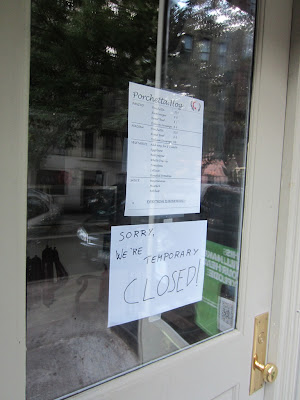 Apparently that "temporary" is more permanent. Yesterday, a new bakery opened in its place. We stopped by, and found about eight kinds of bread baked on the premises and a few trays of cookies... The young man working didn't know much about what was happening here. He rather sheepishly admitted that he didn't even know the name of the place. Maybe something with a G?

It was as if the new owner had his nephew watch the place for 5 minutes while he ran an errand... 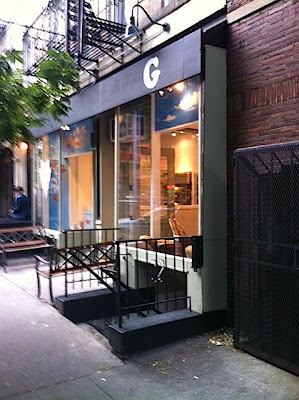 As far as we could gather for now, the place will sell bread and cookies and eventually add more items, such as sandwiches...

And we bought a baguette of sorts ... for $1, which may not have been the right price. (He had a sheet of paper with prices in his pocket ...) But the bread was very good. And we'd go back. 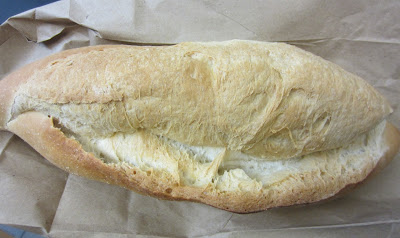 Thanks to @SarahMShaker for the tip.

HAHAHA! "Maybe something with a G?"

It was good bread. I'll go back when someone else is working. It was a funny moment.

They'll have a liquor license in no time.

Better not have a secret speakeasy bar inside. Otherwise, I'm there, esp. for the baguettes.

A bakery that sells freshly baked bread - who would have thought it? The art of bread making is sorely missing in the East Village (unless i've missed something). No more bakeries specializing in over priced cupcakes - I want good fresh bread. Where should I go folks?

Im going to get Killed for this, but Il Buco Almentieri is some of the best bread I have had in my life. I had a really good baguette from Russos on tues also, super fresh at 6pm. I dont know where they get their bread from.

And there's that croissant place opening on A. Hope they have fresh bread, too.

I noticed the tables and chairs in their today... looks as if they're a little ways out yet.

St. Mark's Market carries Orwasher's, which I think is made on the UES. Best sliced bread I've had around here. They carry some other good local bread too.

Im not into that bread at Pain, and it seems to go stale very quickly, where, the Il Buco loaf, was still fresh like 5 days later. The rye bread there is good though. If Im hungry in Essex, I go to the taco stand.

Gracefully has great rolls and baguettes to the right as soon as you enter, if you get them first thing in the morning.

I went there this afternoon and it's only their second opening day. The owner is Italian and the counter staff (who's still getting his feet wet in this new shop) is this Asian high school looking kid. Friendly kid and he tries to show good customer service skills, but he just needs more time to learn the menu. Owner is friendly, too and mentioned that he'll be expanding on his offering in the near future. Why 'G' when the name is Ballaro, which is the same name as the nearby Italian restaurant just a few blocks off. Same owner???

I have been yearning for a store that sells a variety of bread. I always wish that weird cookie store on 1st ave would expand into bread. I mean, if they have ovens, cant they also make bread? Wonderful news.

( and to the person lamenting the bread that goes stale too fast,that's the way it's supposed to be. Real bread doesn't last more than a day or two., bread with preservatives stays fresh forever.)

Yes, same as the cafe/restaurant 1 block away, & they also are partners with yet another restaurant across from Ballaro on 2nd Ave. A year ago he experimented with fresh donuts, AMAZING!!!!!!!

Thanks for all the background...

A Bakery on Fifth Street? Damn, there goes my diet. And I was doing so well...

Thanks. So same own, eh? I've eaten at the restaurant before. Nice neighborhood place to have around. So why the 'G', which really perplexes me...Also, not a great use of interior space. Would love to have a little sitdown area since this place smelled heavenly when I was there yesterday. :) Wish they're hiring me as well, haha.

@Jill - Years ago that weird cookie place used to be an old Italian bakery, that sold great semolina and other typical breads. I was so pissed off when it closed and the cookies went in I vowed never to go in there again. Effin' cookies.

This is very good news. As a vegetarian, very happy to have a carnivorous place replaced with a bakery.

We certainly can benefit from a great bread bakery in the neighborhood. There are sources, though, for good bread. St Mark's Market gets (daily?) deliveries of fresh baked breads from Balthazar, Orwasher, Tomcat, maybe some others (in our non-scientific home taste-tasting, we far prefer the baguette from Tomcat, but that sliced dark bread from Balthazar is always in our home also).

Hope they will have sweets. We have no shortage of sweets places in the East Village, one of my favorite aspects of the neighborhood (Veniero's, Black Hound, Moishe's, Veselka's bakery, etc) but the more the merrier!

I believe the "G" is a remnant from the prior tenant 'Porchetta Ho-G-'. I was walking by when they were taking the letters down, perhaps they got tired and didn't finish. Maybe they wanted to save it for the new sign?

Ballarogue Bakery has a nice ring to it...