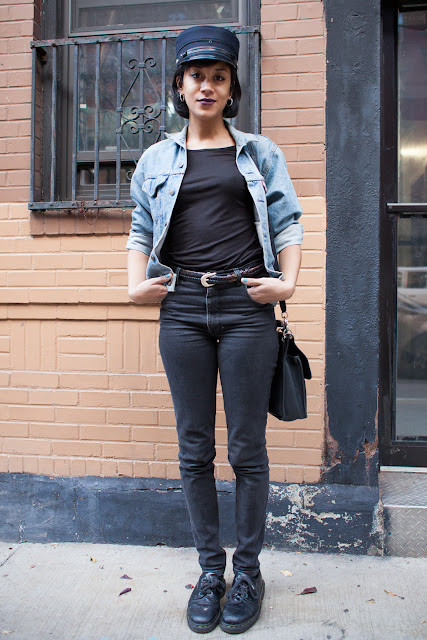 I’m an actress and a model. I’ve been doing it since I left home at 18. I’m from Boston but I grew up all over. I graduated from Connecticut and I came right here after.

I’ve lived on this block for about a year. I’ve also lived on 3rd between C and D, 3rd between A and B, and on 2nd and 2nd. Kate’s Joint was around for awhile, that was a big part of my life. I worked there and I’m good friends with Kate. It just closed recently though. I love Sidewalk Cafe and Manitoba’s is good too, but I usually hang out more on the Lower East Side.

Everyone in my life right now I’ve met in the East Village and it’s how I got my start really, doing what I’m doing now. I was sort of running around with this band and modeling for them and doing shows here and there around the area and I met Richie Rich here — he’s a former club kid who has a fashion line called Heatherette. He kind of put me on the map.

I have a one-woman show coming up in December; I’m on my way to that meeting right now. It’s based on Valerie Solanas; she’s the woman who shot Andy Warhol, and she wrote a manifesto about hating men, so that’s who I’m going to play.

I am moving out of the neighborhood this month. I’m kind of wild and there are a lot of older people in my building, and people who weren’t so keen on noise, so I’m moving out to Brooklyn, to South 4th and Bedford.

She is channeling Solanas in that photo. Break a leg Jocelyn!

She sounds like a nightmare to be neighbors with.

Seriously anon 9:20. I'm not old, and I'm not "so keen on noise" either. I'm 27, and I'm sick of "wild" young idiots drinking and screaming all night every night...and my windows don't even face the front of the building. It's not safe anywhere.

Pretentious little twit. She sounds so smugly pleased with herself that she's "kind of wild." I'm guessing that "wild" = noisy and self-centered and annoying to neighbors. I doubt she'll find people in Brooklyn to be any more accommodating.

Anon 9:20 and 1:02, I fully understand, you have no idea. I'm 26, and am tired of the drunken idiots that give our generation a bad name in this neighborhood.

I live next to one.

Her drunken friends sometimes ring my buzzer at 3am (even though the names are labeled- they are too far gone to notice who they are buzzing) and if I don't answer they just keep buzzing nonstop.
A few years ago she had a bf who would come up every weekend and they would scream at each other at the top of their lungs repeatedly day and night.

'Wild', 'Free-Spirited', and 'Inconsiderate', aren't meant to be interchangeable- and a lot of people need to learn they are not synonymous.

I commented earlier, I just want to make clear I wasn't attacking her specifically. I'm sure she's a great person and had sense enough to know that a more party-friendly building may suit her better. And I wish her luck in what she's doing.

But I think everyone should be considerate of their neighbors because we live in a city where your apartment may be the only place where you can find some relaxation for yourself.

I would have thought that the general vibe on this girl would have been positive.. seems in the comments you shred on her as if she were the typical AAAH WOOOer just out of delta delta delta at notre dame or still acting like it 5 years out of college or something.. this girl and I have little in common but I would prefer her to all the 20k/yr fashion interns with guarantors, finance people in my building.. just by writing the word noise she apparently hit a nerve. You all know there are wax earplugs.