And over on the Lucky Cheng's Facebook page, there's a post that this weekend marks the cabaret's 19th anniversary... "Come celebrate with us one last time at our birthplace in the East Village."

A look back at our humble beginning. Mr. Cheng with the original 1993 staff: Tora, Poupée, Mama Mei-Ling, and Daisy. 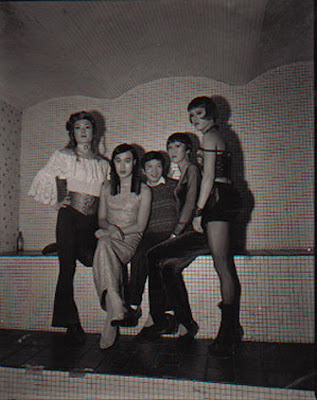 Not sure when they are actually moving up to Times Square. There have been a lot of different dates mentioned via various sources. So we'll just go with "soon."

Meanwhile, for more on the Lucky Cheng's building on First Avenue at East Second Street, Jeremiah's Vanishing New York has a nice history of the space here.
Posted by Grieve at 12:30 PM

All those beautiful Drag Queens used to hang out across the Street - where they mingled with heteros - in a place called "La Linea". One of those rascals almost faked me out. To see how that wound up, you'll have to read my memoirs.

I know what you mean Uncle Waltie,I remember those beautiful Drag Queens well also,but unlike you one night one of the did fake me out. It was terrible.The whole scene just left a bad taste in my mouth. Glad they moved on.