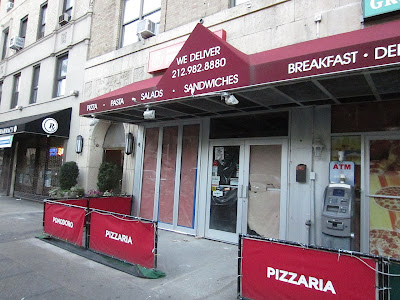 Last month, Closed for Renovations signs went up at Pomodora, the "pizzaria" on Second Avenue between 10th Street and 11th Street. We saw crews working inside, and it did seem like a renovation was taking place ... and we didn't note it at the time.

However, a supervisor at the scene told Blue Glass yesterday that the space would soon become some kind of "Italian-French fusion" restaurant. What that means... we have no idea.

Pomodora and its misspelled pizzeria opened in May 2010, taking over part of the former beloved Dunkin' Donuts space.

Not for nothing... but this is the second pizza place within a half block of Nicoletta that has closed in recent weeks. As we noted Tuesday, Plum Pizzeria on the west side of Second Avenue near East 10th Street has also closed. Nicoletta opened to some fanfare on June 15.

Still, Pomodora and Plum didn't seem all that crowded before Nicoletta arrived...
Posted by Grieve at 6:52 AM

That spot seems cursed, it is always changing.

Meh. This place and Plum never stood a chance even without Nicoletta.

This seems to be good news to me...? Say what you will about Michael White's Nicoletta (it isn't up to his usual standards, etc) there's still no question that his pizza blows away the offerings at Plum or Pomodoro. I'm not mourning the loss of two lackluster slices joints if it means we'll have more restos of NIcoletta's caliber moving into those spaces.

Nicoletta has only been there 5 minutes, their $25 pies are not the death of these other two spots.

Anonymous 9:11 we need more "restos of Nicoletta's caliber...."
what world do you live in?

Mr. White acknowledges that his pizza joint is the prototype for a chain of "moderate priced" (NOT) joints and that it is geared to mass production.

a famous chef that provides lackluster pizza!
and we need more of that?

So much vomit for four little words.

What is "Nicoletta's caliber," anyway? Do you seriously not know that Nicolletta was totally trashed by every serious food critic in town?

"more restos of NIcoletta's caliber moving into those spaces"

This is another example of why your "On this day" photographs are so important.
As Victoria said. " . . .always changing," but I am at an immediate loss to remember what had been there before.

I never went to Pomodora: I figured if they couldn't spell pizzeria, they probably didn't know how to run one. In the end, I was proven right, I suppose.

A Dunkin' Donuts was in the space previously...

"pizzaria" always did bug me. Call me shallow but that's a deal breaker. Plum, too standoffish. Walked by a thousand times, hardly noticed it was there. I feel like these two places failed on their own merits.

Thanks, EVG. I'm probably thinking of something pre-DD. Who knows?

I thought it was a great (if anomolous) example of de-gentrification when Dunkin' got replaced by a pizza joint. But Pomodoro was a midtown-esque pizza/deli joint that didn't even try to offer anything distinctive (and distinctive needn't be expensive). As for Plum, isn't the restaurant business hard enough without trying to turn a space that has long been X (in this case, bar & grill) into Y (yet another pizza place)?

the spot was originally a pizza place, sort of dingy, greasy, with pretty good pizza. nice enough folks. reasonable. it was open late and not a problem. there were not hundreds of pizza places then.
there was also a liquor store next door, warren, that was forced out of business by a rent increase when downsizing was not enough. for a while there was a young couple that had the space as a deli. they never did well but their coffee was ok. after that i think there was another pizza place before pomodoro that expanded into the space given up by the liquor store. that did not work out and they did not stay in business. i think it was after that that dunkin donuts came in.
there was so much going on there that it is hard to remember it all so my chronology might be off a bit. stores vanish like a puff of smoke.
does anybody remember sticky fingers?
hay anonymous 3:35, what is it that a pizza joint does to be distinctive?

I heard that the new establishment was going to be a small plates / tapas lounge, which to me implies another liquor license. With Nicoletta open so late and now this, I can only imagine what this block will turn into! Also, did anyone see the lights that change colors surrounding the bar? Classy.

Both of those places were awful. Nicoletta is a quality place and the haters should calm down. Michael White is a good man and loves being part of the neighborhood and has a lot of friends here. Plum was misguided from the get go and was not good then tried to get the college crowd as a bar. The other joint was just mediocre generic bad pizza slice joint.

There are two reasons I visit this blog:
de-gentrification and midtown-esque

They died because their pizza sucked, bit and blew. Big time. Since Five Roses closed, the nearest decent pizza is Gruppo on Avenue B and 11th.

1:06, I'm trying and failing to be polite --you embody everything wrong about this Wisconsonian invasion. Because Michael White is a nice person we're supposed to forgive his professional mediocrity? Is that New York now? Your pizza can be paste and oil but we let it go because you have a bunch of media savvy "friends here"?

Also, "haters"? Are you also the president of the Justin Bieber fan club? Or just twelve?

Anon 1:06, you're that same blowhard from the Ducks post, yeah?

Ate at PLUM once, left convinced it was a front for something... no way it was trying to actually be a restaurant

A few generations before it was the donut place, it was another pizza place, run by the same people who owned the "liquor store" a few doors down. During one of the blackouts they price gouged pizza slices, which were never very good to begin with. I vowed never to go into any of their stores ... bad karma for them. As for Nicoletta, that is pizza with no soul.