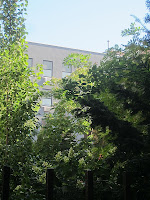 Speaking of 326-328 E. Fourth St. Icon EV, the new rentals here between Avenue C and Avenue D, were available for move in starting Sept. 1. Units are priced between $3,500 for two bedrooms and up to $8,000 for six bedrooms. The building's design is described in the listings as "a Classic New York Atmosphere." (To accomplish this, workers gutted the 170-year-old buildings and added two additional floors.)

Anyway, they seem to be popular enough — a good number of the units have already been rented. According to Streeteasy, seven units have been rented at No. 326 and five at No. 328.

And what do the neighbors think so far? Via the comments the other day:

Our building on 3rd Street faces the back of this atrocity. We used to see blue jays and cardinals in the old tree at the edge of this property, but that was the first thing they cut down (it never would have gotten in the way of construction). Now in the same spot overcharged renters have access to an ugly concrete patio, and what looks and sounds like frat boys [who] sit and drink beer and smoke cigarettes and talk too loudly till way past midnight. Shame.

One of the from facing tennents has what appears to be a comforter and a beach toel hung for curtains. And what's with the shitty window a/c units?

I feel for the tenants who have to deal with the frathouse atmosphere... A bunch of inconsiderate a-holes in a building with a back yard patio can ruin it for people in quite a few buildings around (sadly, I speak from experience...). I sympathize.