Through the years with the sunlight-blocking Hyatt Union Square, opening Nov. 15

Well, here we are at 132 Fourth Ave. and East 13th Street ... at the site of the incoming 178-room Hyatt Union Square — five years in the making! Where it looks as if a piece of metallic space junk landed upright on a formerly historic two-level building... 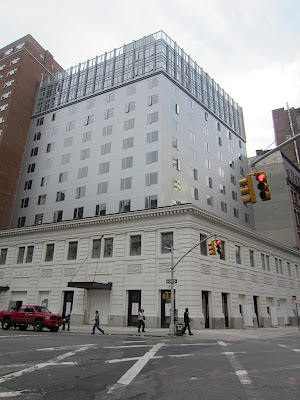 Yesterday, real-estate blogger Andrew Fine, who has been monitoring the lack of progress here for years, noted that the opening is tentatively set for Nov. 15.

Oh, the memories that we've had here! 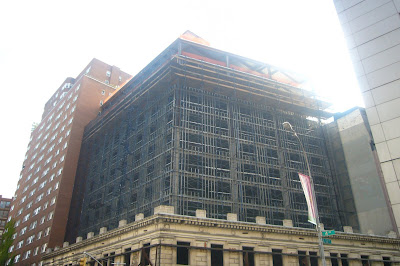 And there goes the view and daylight... (and this must have really been awful to cope with... from the construction noise to loss of the views and sunlight) ... 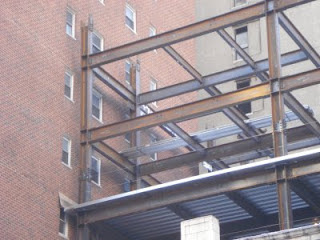 [Via A Fine Blog] 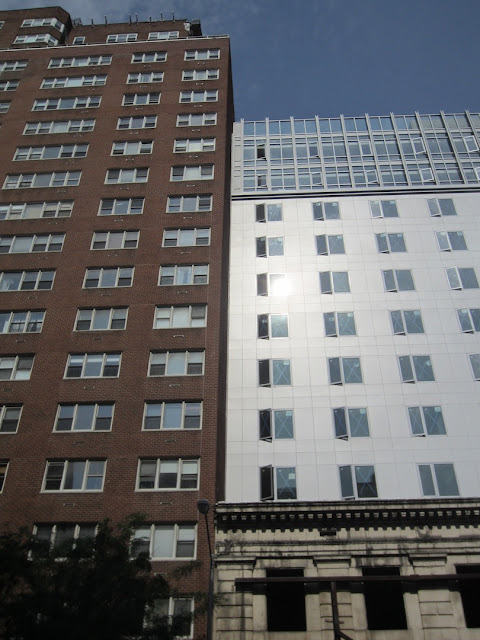 In any event, the stalled/unstalled/too tall/view-blocking hotel project dawdled along ... Curbed's first post on it went up on July 18 2007.

And it wasn't always a Hyatt property. Early on hotel developer Sam "McSam" Chang's group was heading up the construction. It became Hyatt's problem property in November 2010.

Andrew found this shot of 132 Fourth Ave. (on the right) from 1924 via the NYC Municipal Archives... 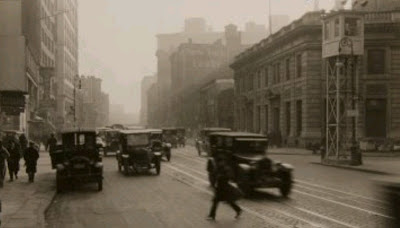 He has more details about the hotel (like room rates) here. You can also find more details at the hotel's website, which is now live... You don't have to look, though — we'll have about 20 more posts on it before Nov. 15.

I think I would have some type of mental breakdown if they blocked my windows like that...

Who knew the NYPD had those anti-crime observation thingies 90 years ago.

I thought by law new construction could not cover up windows, that they had to leave some kind of air space between the two walls. Can anyone clarify?

there used to be a great bar on the corner of that building with great burgers.

Does anyone know what is that tower in the last photo?

I saw Courtney Love play a show in the nightclub that was on the ground floor of this building in 2004. She was arrested after her mic stand fell off the stage and hit some guy. I suspect the Hyatt won't be as fun.

The complaint here is that new building is too tall and blocks the light of really ugly and even taller building?

Wasn't that the Kit Kat Club ages ago?

Who's the man behind this, Mr. Burns? http://www.youtube.com/watch?v=JnlTo0Q10y4 (en español)

Honestly, don't know why it's a fuss. It's not like the building next to it is much to look at. You could put a lot worse up.

@anon 12:24 Yeah, that was the space. It's last few incarnations were Spa and Plaid.

Well, if you had an apartment with several windows that became bricked up, you might be upset about it. I thought you couldn't build over someone's windows either.

Someone asked about the legality of covering up windows of the neighboring building. If you look at the windows of that building, you will see that they are flush to the building's facade, and the facade rises straight up from the property line. That means that they are what are called lot-line windows - they are built exactly on the lot line, and those windows were not counted in the required windows for the apartments. In other words, when the building was constructed the developer knew that the windows could be blocked and all tenants - rental or coop/condo - must be informed of that fact. There are 100's of these buildings, especially in Manhattan. So yeah, I'd be pissed too but they should have known that this would eventually happen. Lesson: always look at the outside of the building before you rent or buy an apartment.