Bob Arihood died last Sept. 30. One year later, his presence is still felt along Avenue A ... where an awning hangs at Ray's in his honor ... 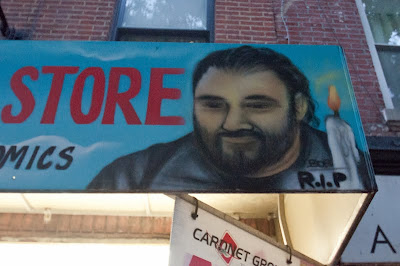 ... and a clipping about his death from The East Villager is taped to the front door of Lucy's. 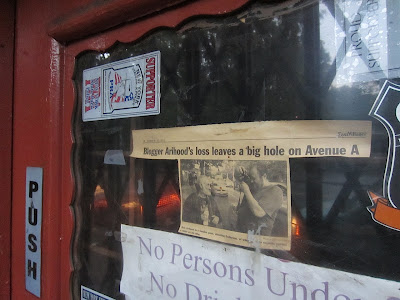 I miss my email exchanges with Bob. His assessments of what was going on in, say, Tompkins Square Park. His theories. I'd occasionally ask for advice about a story. He'd offer wisdom. He sometimes seemed to be looking for some, mentioning that he was getting too old to be doing his site, Neither More Nor Less, and later, Nadie Se Conoce. (Both sites have been preserved, and are an invaluable resource about the East Village.)

Then I'd see him perched near the entrance to Tompkins Square Park at East Seventh Street and Avenue A talking to some regulars. Camera strapped around his neck. He would never be too old.

I miss his photos, his brand of journalism and the narratives that captured another side of the neighborhood. The side that has been on its way out, but still holds on despite the ongoing changes.

Every person who I talked to about Bob in the past few weeks leading up to this anniversary said how much they missed him. His best friend, Mike, said that he thinks about him every single day.

In recent weeks, a law office relocated from Avenue B to the storefront apartment that Bob lived in on East Fourth Street. 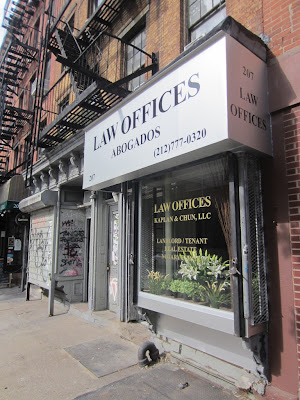 I hesitated to post the photo. This is a situation where I'd ask Bob what he thought.

For further reading:
Many people wrote tributes about Bob last year. Here are some of them.

NY Through the Lens 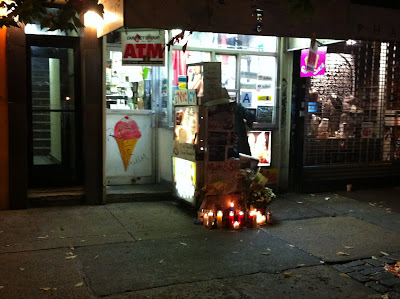 Thanks for remembering Bob. He was such a great guy, so generous and caring, and he is missed.

an amazing talent. a true gift.

That memorial photo by Dave could not be more perfect.

Avenue A has never been the same.

I'll never forget being in the Mars Bar and Bob came up to me and said he liked my blog. I asked who he was and he said, "I'm Bob Arihood." I couldn't believe it because I had been reading his blog and admiring his photos for years. I told him I loved his photography and he was so humble about it and I was just knocked out because he knew who I was. It was such a great New York moment for me. Bob was really a one of a kind guy and I feel blessed to have known him and lucky to have made a friendship with him. He's the kind of person I moved to New York to meet.

East Village/Alphabet City's loss is heaven's gain; Bob is now photographing the angels up above.

Couldn't agree with you more, EV. Loss of Bob is a huge, huge, huge loss.

I miss him every day.

Marty I had the exact same experience. I have no idea how he knew who I was, but he did. A very warm hearted man.

Didn't Bob use a leica M series? Perfect for candid shots, no other camera can do candid like a leica, and candid is WHAT you need especially in the EV.

Grieve, thanks for bringing up Bob, I still have both of his blogs in my RSS feed, and it was just a week ago when I clicked back on some of his last posts, and noticed his RIP date was coming up soon.