A sign at Croxley's mentions the 'incompetent contractors next door' 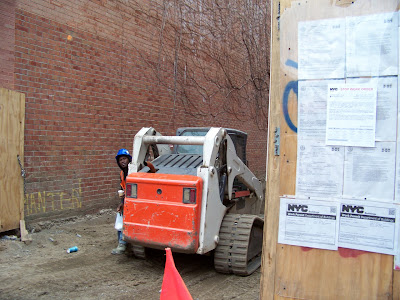 [Last Thursday at 26 Avenue B via EVG reader Eric]

As we previously reported, there's a full Stop Work Order on 26 Avenue B, the construction site adjacent to No. 28, the building that had to be evacuated late last Monday afternoon..

Construction recently commenced in the empty lot on a new 6-story apartment building. DNAinfo reported that a resident at 28 Avenue B started to notice cracks in her ceiling after construction began.

The DOB noted the following about No. 28:

Aside from displacing residents, the evacuation shut down the tenant on the ground floor — Croxley Ales. And this sign arrived to greet would-be patrons this past weekend... 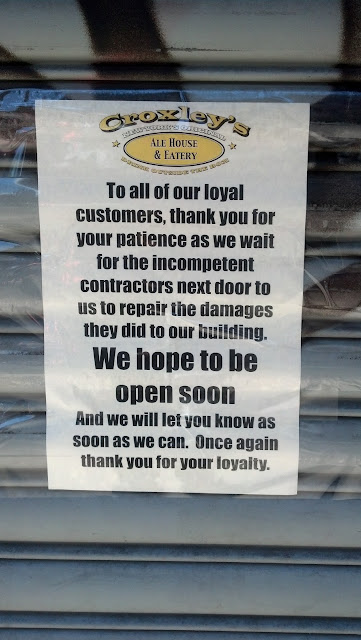 Also, the DOB is allowing partial work to continue at the construction site...to "perform stabilization" to 28 Avenue B, according to city records.

Email ThisBlogThis!Share to TwitterShare to FacebookShare to Pinterest
Labels: 26 Avenue B, 28 Avenue B, Croxley Ales

I can't believe how much illegal and incompetent construction work goes on in our neighborhood. Why isn't the DOB more active in enforcing the rules and codes these contractors are supposed to live by?

Because they are paid off, in all likelihood. Welcome to NYC!

Because everyone thats in charge of regulating development in this neighborhood are all paid off by landlords on some boss tweed level corruption. You dont think its actually legal to throw all the natives out within twenty years right?