These posters arrived last night around the neighborhood... 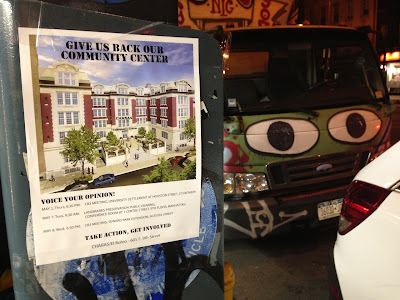 ...urging residents to speak out against the plan to turn the former PS 64 and CHARAS/El Bohio community center into a 500-bed dorm on East Ninth Street just east of Avenue B.

The building is a topic of discussion at two upcoming CB3 committee meetings... as well as at a Landmarks Preservation public hearing... (we'll have more information on that meeting later). 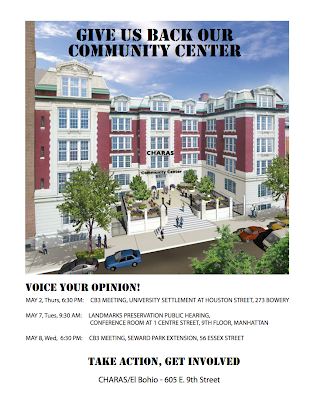 Meanwhile, there is a petition campaign in circulation that reads:

Petition campaign asks: 'Return PS 64 to the Community'
Posted by Grieve at 6:11 AM

To be perfectly honest, I signed the petition but with all the recent changes in the hood (and the ones still coming) I feel overwhelmed by it all. The EV is being remade (again) and it's only a matter of time before I get kicked to the curb as well. I'm beginning to feel like refuse. Sadly, I don't think this will even be a place I'd like to visit soon enough; still, it saddens me that it has to also end like this.

I agree with editrrix. I am away for a few weeks, and I am not even looking forward to returning home to the East Village. All I can think about is how I won't be able to sleep because of the bar across the street from my building and the woo-hooers screaming all night. But where can we go? I can't afford to pick up and move.

I too m in the same boat. I keep on walking around here whistful, feeling like I've already moved...

This is EXACTLY why we need to have our voices heard and speak our opinions at the CB3 and Landmark Preservation hearings. I will NOT go down without a fight! It is absolutely insane that this is even up for discussion, and in my opinion it's illegal. The community does not want a Cooper Union dorm in CHARAS, which is zoned for community use. The community cannot get into or make use of a Cooper Union dorm in any way, shape, or form. This is a prime example of local government board members going 100% against the community. Shame shame shame!

sadly I have to agree with the first 3 comments. I've probably mentioned this in a comment here before but I was on the West Coast visiting an old friend that grew up in the neighborhood but moved out 10 years ago (in his late 30s). While we were walking around chatting he said to me "man, I really miss the neighborhood" to which I could only reply "I do too"

ericfg's comment says volumes about how the neighborhood has changed. It's happened so fast, too.

The real problem is that there are not enough lawyers living in this neighborhood who would have their own vested interest in fighting back against all this bullshit.

The courts are the only way to deal with this crap.

I'm against the dorm, which hasn't cleared the city yet, but I'm not sure what "returned to the community" would mean. The old CHARAS was mainly a clubhouse and in reality did not do much actual community outreach over the decades. There were events there occasionally but it was a vast space taken up mainly for personal use. If the community, and "the community" is an interesting phrase on Ave B in 2013, was going to take full advantage of the space what should be there? Please take this as a serious question not as flame bait as I personally don't have any answers or firm ideas about this.

Sources report that Rosie Mendez has a non profit lined up which would purchase the building at a large profit but the developer wants more.