Given all the discussion about Citi Bikes coming here soon, Dave on 7th shared a few photos on Monday of the Barclays Cycle Hire from a recent trip to London.

And now! Another reader passes along some photos, this time from a trip to Paris... Here's Vélib’ — the city's large-scale public bicycle sharing system that launched in July 2007. The system encompasses around 18,000 bicycles and 1,200 bicycle stations, as I lazily borrowed from Wikipedia. 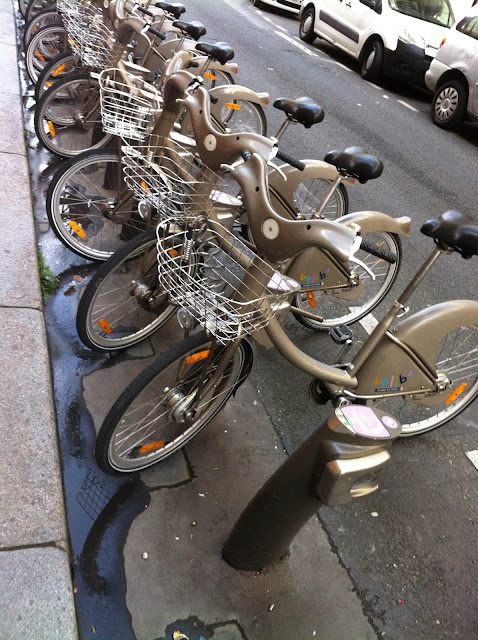 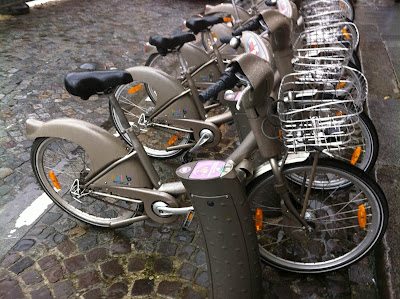 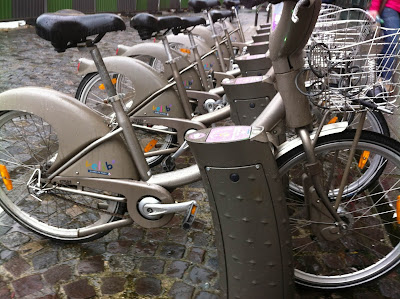 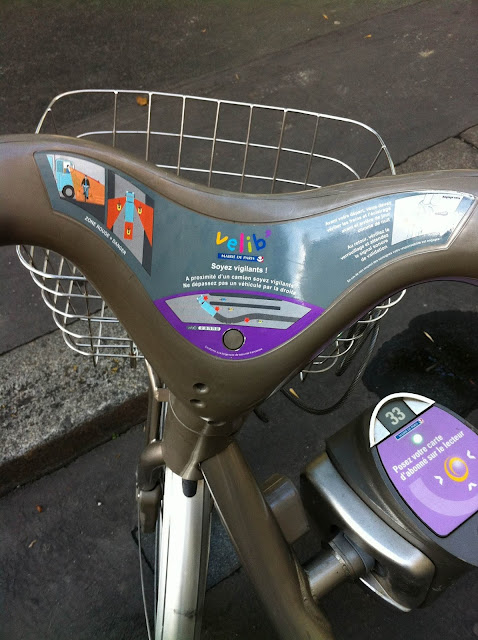 More from Wikipedia: "Vélib’ is operated as a concession by the French advertising corporation JCDecaux. As of 2012, Vélib' is the world's second-largest bikesharing program, after the 61,000-bicycle system in Hangzhou, China."

Here, the bike-share program will feature, at the outset in a few weeks, 6,000 bikes at 330 stations. (Go here for the East Village docking stations.)

As for Paris, the EVG reader helpfully noted that the bikes are very popular and that "French women look sexy on them." There you have it.
Posted by Grieve at 6:00 AM

Not a bike rider really myself so I can't really judge, but the shape of these bikes make it look like they'd be a real slog to ride.

Also, I'd be more into this if the citibikes weren't basically giant ugly citibank billboards. I understand that someone had to sponsor this to get it, but they could have been a little more subtle about it.

if we must be cursed with this godawful horsesh*t, can we please have those instead???

I like the look of the Paris bikes. Somewhat stylish, understated, and not a hint of commercialism. The Citi bikes are crass and overblown rolling adverts for Citibank, plastered from stem to stern with the bank's logo. No thanks; I'll walk.

Don't know if its been brought up, but I can't wait to see all the delivery guys following the rules

Better baskets. I bet everyone bitching about Citibank has an account there.

Yeah in frace, with their very high income tax rate, they do not need the corporate sponsor. Our relatively low income tax in the US means we need to get citi to run this as a PR campaign.

Was really shocked (though, shouldn't have been) to see the Citi racks installed ON the sidewalk on 3rd and Lafayette. Just fucking stupid.
ps,
As a side note, I think this will be my last post. Will continue to read (and love) this blog, but I have nothing of interest to say that makes this catch BS worth it. Too much.

Here in NY you definitely want to return those bikes: the charge for a lost bike is $1,000.

FYI In Paris you need Amex or euro credit card (with chip) to rent them!