The last interesting empty lot in the East Village

Now that The Mystery Lot on East 13th Street is officially A Luxury Lot... we're nearly out of abandoned lots that are rather mysterious around here... save for this lot... the one off Houston/East Second Street between Avenue B and Avenue C... 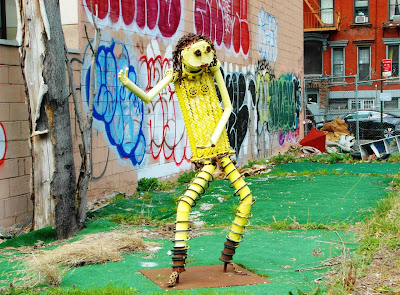 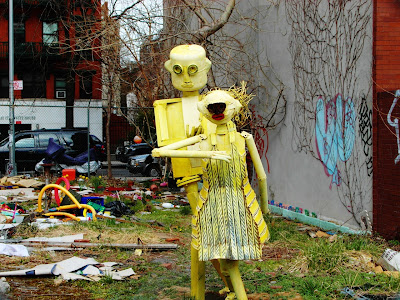 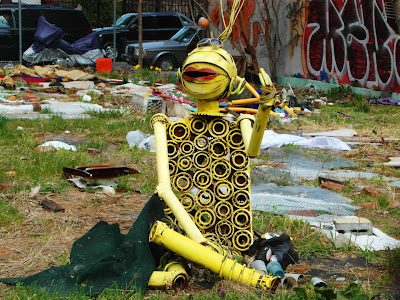 This lot still holds some surprises, such as hosting the occasional crucified bear ... We don't know much about the lot (making it all the more mysterious!) ... just that the owner isn't interested in selling off the parcel... Still, enjoy it while you can.

Previously on EV Grieve:
A look at the dwindling number of East Village lots

Email ThisBlogThis!Share to TwitterShare to FacebookShare to Pinterest
Labels: East Second Street lot, lots that are mysteries, the Mystery Lot

uh oh - you are revealing secret lot to developers!

The woman who owns this lot is too old to tend it now, and it's slowly filling with garbage and rats. The walls are getting graffitied over with gang tags. 7 years ago this log was interesting. As a neighbor, I'd rather see this lot sold to a developer at this point.

Nooooooooo! I look out my window and see that lot. If they build, it will take away my only slice of sunshine!

I live near this lot and I LOVE it. The robots are superb. They are very Stanislaw Lem's "The Cyberiad."

I vote we Christen it the L.I.E. lot for future posts. Unless someone snaps it up in the next 48 hours..

the graffiti, or at least some of the more obtuse large tags, were done by three white boys in button down shirts, who had a step ladder and a carpet to put over the barbwire. They drove a car with Jersey plates. gentrifying taggers.

I initially thought I was witnessing burglars leaving the scene, but as the stench of fresh spray paint wafted passed my nose, I realized differently.


"The walls are getting graffitied over with gang tags."

"As a neighbor, I'd rather see this lot sold to a developer at this point."
Why not get off your lazy butt and go help a neighbor out? Perhaps she would appreciate a cleanup effort? Who knows maybe she would even allow you to plant a little garden.

CITIZENS OF THE EAST VILLAGE :

We are from the planet DEVELOPO.

How DARE you mock our offspring spawns with your puny attempts at humorous performance sculptures!


This empty lot will NOT be allowed to stand!

One of our earth-based operatives (referred to in your language as "property developers") will be immediately intervening on our behalf.


BEHOLD one of our previous efforts....the DARK STAR.....

And fair warning......Thompkins
Square Park is next !

I live right next door to this lot. I have lived here for almost two years and I have just been trying to figure out what is up with this lot. I tried some investigating in the beginning , but to no avail. Occasionally they'll be an elder lady in there sitting on a chair. But that's about it. I'm still on the case though.

NYC Dept of Finance tax records show the property is owned by 90 yo Florence Toledano, who lives on 14th & 1st. I like the idea of an art space, but she isn't maintaining it. E 2nd St residents are using the lot as a dump, and the lot has a rat problem. I wish she'd deed it to the city to become a public park.

@ "Why not get off your lazy butt..." She's some rich old lady who lives in a penthouse in a 14th st condo, who can well afford to maintain the property. It's private property, and surrounded by a barbwire fence. Entering is trespassing. Maybe she could be a good neighbor, and pay to have the garbage hauled out of her lot.

Correction, the $136 is the exterminator charge from the city. She's paying about $15k per quarter in taxes.

She has property neglect violations for her home in Fort Lauderdale...

Plus she own, the apartment building at 89 1st Ave. She can well afford to take care of that eyesore.

89 1st Ave is also an empty lot, not an apartment building.

The owner of this property is not "living in a penthouse". I have been to her place and she lives modestly. Though she has been offered a pretty penny for the space, she wants this space to be a sculpture garden and has not sold it. I know because I am the one turning it from a lot to a sculpture garden. There have been many passers-by who are grateful. What a difference a month makes!!! Come have a look and take in the positive vibes!! : - )

I passed by there today and loved it! I am an artist and would love to paint inside. Do you know how can we get in? when is it open. All the art work inside is done by the same artist?

my famaily was the last to live on both lots 231 and 233 east 2nd street. they should just leave them alone.