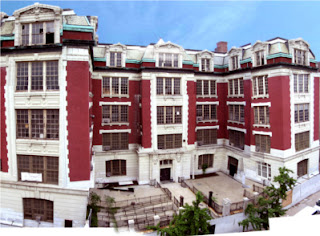 From the EV Grieve inbox... via the East Village Community Coalition...

Report: Former PS 64 one step closer to becoming a 500-bed dorm for multiple NYC colleges
Posted by Grieve at 9:57 AM

Is the "community" going to come up with the millions required to restore this eyesore rat nest and pigeon coop? I think not.

I know that this isn't the most popular position. But as long as it is a Cooper Union dorm only I am ok with it. I believe the Cooper Union students who are mainly artists and designers are exactly the type of people that we are constantly bemoaning the loss of in the EV. Housing young creative people that have truly earned there admission is much different than housing NYU brats. Or even worse the building could be converted to condos for the rich.

signed. like it has a snowball's chance of making a difference.

500 new residents on that street will be a nightmare. :(

There is no community.

SERIOUSLY PEOPLE! If you don't want a 7/11 in the neighborhood, this would bring lots of chains and their ilk to the area around 10th & B. This would be a horrific event! Please the time to mobilize is now! This is a much bigger issue than a single 7/11 moving to Ave A. This is the destruction of a neighborhood! C'mon People let's fight this now!

I sympathize with anon 10:22, but a community center would be better still -- if it doesn't become a center for the upscale. I signed.

Housing for people that are earning an education and becoming productive members of society. ATROCIOUS!!!!

the problem is the slippery slop
once the building is built as housing
it would only take some backroom deal to change from college housing to apartments .

the thing this building should be is A SCHOOL!
the East Village is totally underserved and could use a new school built from ground up

I do think the community could fight the fact that it will house 500 students. That is a huge influx of residents. If it was an apartment building, there wouldn't be anywhere near 500 tenants.

Perhaps I don't know the whole story but I have the understanding that this building once city property has been sold and it will NEVER be available for community use again. However we can still let our voices be heard about what this building becomes and how it will impact our neighborhood. 500 people seems a lot for one building of that size and would it not be under used in the summer months? One way or another housing will be part of its future and most of us will not be happy no matter how the pieces fall.

"I believe the Cooper Union students who are mainly artists and designers are exactly the type of people that we are constantly bemoaning the loss of in the EV."

Young creative people only existed in the 70s and 80s.

The 80s, what a tremendous decade.

NO MORE DORMS! This is NOT a college campus for fuck's sake!

Give it back to the community - a center for people of the area to gather, socialize, laugh, scheme, celebrate - whatever...

Look, the thing's been sitting there, unused, un-lived in, for what- well over a decade, a decade and a half? If they own the land, and want to turn it into a dorm, fine- let them. Better a dorm than a monument to decay. Stop trying to keep young people out of the neighborhood. If you're worried about who the young people are when they move in, then let the neighborhood sink into them. I was a college kid, too, once. I'm sure a lot of you were. I've lived on 9th Street, and watched scaffolding rise and fall on the outside of this building, with zero progress made, ever. I remember when the building next door to it was still an empty basketball court, where a little blue stuffed bear would lie facedown, unmoved, for years, as the seasons changed around him. The snows would bury him in the winter, back when it used to snow. Eventually - a building came and the bear was gone. Now that lot is someone's home. I'm sure the bear wouldn't mind, wherever it is. He'd been through worse.

Signed. I don't see why Gregg Singer wouldn't first try to open a hospital or similar facility in which he can make a profit and the community needs. We definitely do not need 500 college kids getting drunk all week.

It should be a community center with a ground-level community store with all variety of vegan and organic snacks. Quickly! Before the East Village completely reflects the wishes of its current inhabitants.

Cooper was not properly informed of the circumstances surrounding this building. No one in the Cooper community was informed about these plans until after they were made. A school cannot be an anchor for the dorms when it is 1. only given priority (not commitment) for 2. less than half of the planned rooms.

A side note: it wouldn't really be 'new' residents in the sense that, for Cooper at least, many of the students live in the neighborhood already anyway.