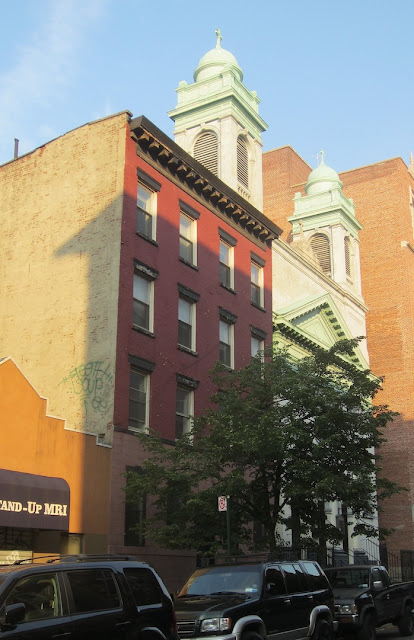 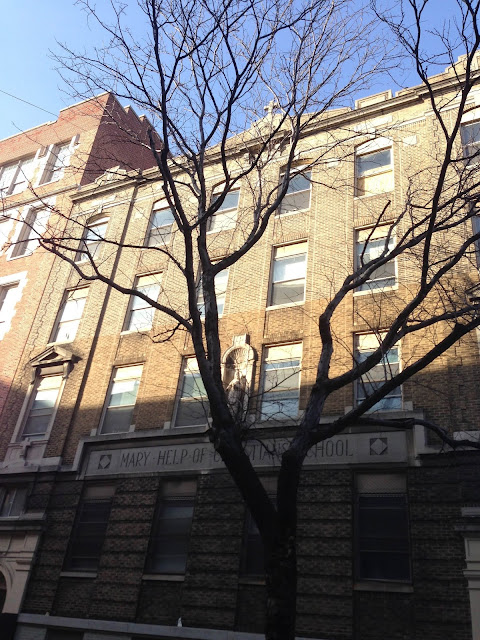 Reps for developer Douglas Steiner filed permits today to demolish the now-vacant parcel of Mary Help of Christians that includes the church, school and rectory, according to DOB records.

Steiner, owner of the Brooklyn Navy Yard's Steiner Studios, bought the property last year for $41 million, as the Local reported in November. Aside from the three properties mentioned above, the deal included the former flea market lot. 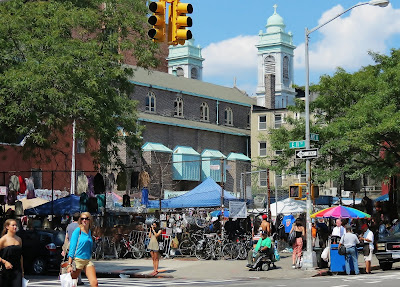 Rumors of development here have been swirling since 2008, when The Real Deal reported that the Archdiocese of New York had sold two-thirds of the playground space along Avenue A had been in an all-cash deal for $10.4 million. That deal never materialized.

This is roughly the area of development that we're talking about... the church, adjacent school and rectory, and playground where vendors used to set up for the weekend flea markets... (the three buildings on the southwest corner of 12th Street and Avenue A aren't owned by the Archdiocese...) 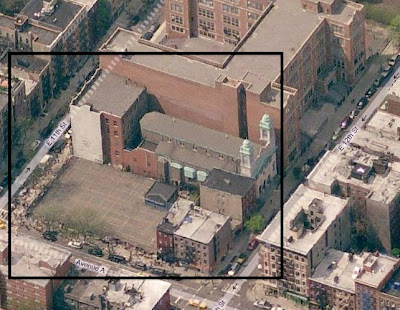 The Greenwich Village Society for Historic Preservation and other community groups submitted a request to the Landmarks Preservation Commission asking them to landmark the church. The LPC denied the request. (Read about that here.)

No official word just yet on what new residential-retail development will rise here. There was some talk of an 80-20 split to include affordable housing.

Given the demolition permit, it doesn't appear that part of the church will be incorporated into the design of the new building, much like NYU did by sort of including the façade of St. Ann's into the entrance of the 12th Street dorm. 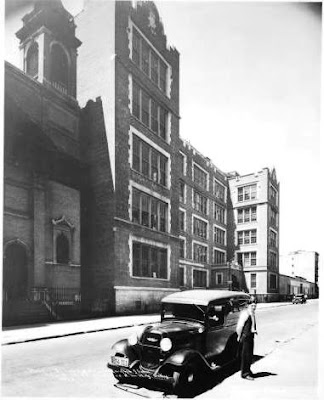 It's interesting that those three buildings on the corner of A and 12th are now part of the deal. You would assume the developer approached them.

I meant to write "those three building son the corner of A and 12th are NOT part of the deal." I imagine the developer offered to buy them.

damn, what a bummer.

Kushner owns the two on the corner. They have air rights to sell, but not enough to fill the allowable 80ft height on the avenue. So it's an ideal location for an affordable housing bonus. But the incentive is really low by my calculations -- could be as little as an additional two or three luxury units, and probably no more than five, depending on how large each space will be. So it will be interesting to see whether Steiner will build affordable units to get the bonus. It's a test of the Bloomberg model.

This is my corner. I will miss that beautiful church and the relative peace this corner has had for 10+ years.

Neighbors get ready for a HUGE building and a long, long period of destruction/construction.

That's a huge site. They will be selling the "character" of the neighborhood to apartment buyers. It would be nice if the site's retail spaces did something to support that "character" even if it sacrificed some potential retail rent.

bad karma to all involved

I truly hope all of those involved in the selling of this land, church and school, and on the Landmarks Preservation Committee, who refused to save it, spend eternity in a very hot place with lots of flames and pitchforks. They deserve nothing less.

Shawn G. Chittle -- I feel for you. Losing all that open space and light is not a good thing for the vicinity.

"This is my corner" - really - how? you own it? And really - how many times did you go to, visit, or pray in that 'beautiful church'? (I was a parishiner for over 50 years - so i do have deep feelings about relative newcomers claiming some attachment.} I'm sad, sad, but have little tolerance for the johhny-come-latelies who jump on the bandwagon long after the fact. I was a rosary bead protester when the first attempt to close MHOC came about. So stick your head back in the interloper bagel shop that so foolishly named a bagel sandwich after 'frozen turds' (look that one up!)

I have lived on Avenue A between 11th and 12th St. since 1977. Things have never been worse. The influx of NYU students and theme bars has ruined the feel of an International neighborhood. Most of the Polish/Ukranian stores and resturants have closed. There are NO good vegetable stands, no ore bodegas. Nothing but ugly money chasing ugliness.

I've lived in this neighborhood for 16 years, and to anyone who's lived here longer than I have or was born and raised here let me just say I recognize your connection to the area, just don't dare call me some 'Johnny-come-lately'. Who the hell died and made you Boss Hog? Nobody has ownership of this neighborhood. 10, 20, 30 years, whatever. People that have lived here for extended periods of time have an emotional connection to the neighborhood, especially if they knew what it was like before all of this nonsense took hold.

The tearing down of a 100 year old church, replacing it with a glass box. The character of the neighborhood stripped. The whole thing just sucks ass in a big way.

@Friend of Dorothy Day - Jesus, where are you buying those hate pills you're obviously o.d.'ing on? Who in NY does NOT say stuff like "my block"/"my corner"/"my team"? It's a commonly accepted usage in the English language which, if you are as old as you seem to claim you are, you should damn well know without having to be told. And that guy has been living on "his" - yes - corner since the 1990s - maybe not as long as you've been polluting the neighborhood, but that does not give you the right to claim that you are somehow superior; you can live in the EV for one week and still have the right to be saddened and outraged by what is happening in it. You don't have a monopoly on the East Village, no matter what you would like to think, so until you can keep a more civil tongue in your head, why don't you just stay off this blog and these threads? Your voice is NOT simpatico.

...who changed the meaning of the word progress?...

Alas, going from 80/20 to 20/80 or thereabouts in regulated/unregulated housing is defined as progress. The usage hasn't really changed in 50 years or so. The progressive movement sold some social reforms, regulated housing one of them, in the name of more private ownership in the long run. Corporations, rich people, grifters, and so on were all promised more productivity, more return on investment, and more shit lying around if women worked, people drank less and bathed, could read and write, and so on.

I think we agree, regulation resulting in stable neighborhoods and nicer homes overall is good. The problem is the change in ratio between regulated and unregulated housing, not the change in the definition of progress.

Way to win over more allies to the cause, Friend of Dorothy Day.(snark)
We need to work together to make sure there is indeed "affordable" housing, maybe some designated senior housing as well, included in this deal. And that the size and height do not block all the fabulous afternoon sun that neighborhood residents and businesses enjoy and profit from, especially at this time of the year. We can work for large setbacks, public space and other concessions to preserve community character and enjoyment.

this is just so f*cking awful.

friends of dorothy day why would you attack someone who is so obviously on the same side of an issue as you are? You have a right to a bigger share of anger? that's silly we need allies even if we can't defeat the billionaires. BTW I was talking to a guy who works construction and he has worked on some 80/20's he said they are instructed to use the cheap materials for the 20's and they don't get the views or anything else desirable. 80/20 is a sham, a few crumbs they threw to the tenants that do not provide long term affordable housing.

Please don't let Friends of Dorothy Day sidetrack everyone from the real issues here. Dorothy Day is an internet troll who wants us to know that he has a big dick.

We got it. Back to the issue at hand.

Hey Dorothy - you need to get new batteries for you vibe.

I am a resident of the neighborhood for 33 years, former student and parishioner at MHC... It's disgusting to see what EV has turned into... A haven for spoiled, rich, trust fund babies living off their daddy's dollar. They contribute nothing to the neighborhood and litter the streets with their drunken/drug inducted debauchery late at night, disturbing the residents and clogging up the already tight sidewalks... This neighborhood is no longer a beautiful collage of multiculturalism... All the wonderful beauty that was once the EV has died and gone to Starbucks... This is one of many devious plans to move the lower/middle class out of NYC concocted by Bloomie and his mega rich cronies...

I have been to the flea market a number of times. A friend and I discussed about how the EV and other neighborhoods are losing their diversity and history with all the new construction. I have nothing against progress but much of the new ambiance and establishments are sterile.

That's why I moved to Brooklyn....We still have neighborhoods and landmark protection. The EV, my home for 20 years, has lost the battle.

I am really over the "I've lived here longer than you so are a new comer and I am magically more deserving of this place than you" mentality. I moved to 6th street and c in 1981, I moved to 12th and b in 1999 yet I have been confronted by some people that were not even born in 1981 claiming I am an outsider and new comer mostly because I am milk toast. Anyone that wants long term roots in the EV deserves to be welcomed. It is the transient students and soon arriving financial market capitalists that are here for the short term. People that could care less about knowing their neighbors and hope to flip their apartments after a few years for a tidy profit will bring the EV to its cultural knees.