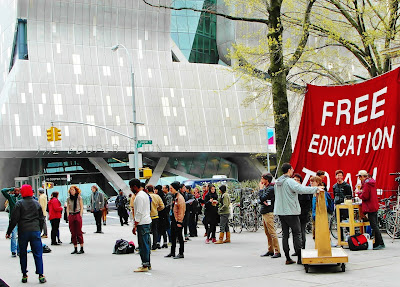 Earlier today, Cooper Union officials announced that, for the first time, the school would start charging tuition, effective the fall of 2014.

As a result, several hundred students and faculty members staged a walk-out this afternoon.

Using similar theatrical tools that activists have employed in previous demonstrations, Cooper art and architecture students ran around the building hugging the walls in a human chain while chanting “Free as air and water...Save Cooper Union.”

The students also held an “Irish wake,” setting a hat ablaze on the pavement and singing satirically in front of the same building students occupied some months ago. While some students seem disillusioned by the school’s decision, many more are angered that the Board of Trustees met secretly in the morning while students were in class to avoid any disruption of their meeting.

Large numbers of the NYPD were also on-hand... 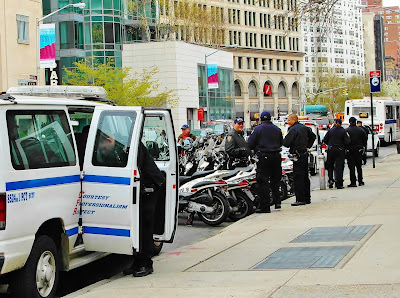 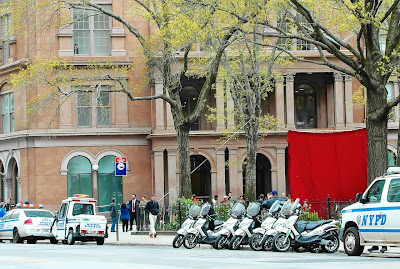 Photos by Bobby Williams.
Posted by Grieve at 6:59 PM

Demonstrations will do nothing - the coterie of real estate interests that control the board do not care about public opinion. However, you only need to peel off one trustee to have standing to sue for the removal of the rest of the board. Get in front of the right judge, and who knows what'll happen.

doesn't it matter what the charter states?
articles of incorporation or whatever?
and what a sweet deal the city gives them on the death star building and the taxes they DO NOT pay and their non-profit status, etc.????

Nothing in life is free.
Eventually a good thing ends.
Deal with it.

Not Through a Glass Darkly said...

Stupid spoiled self-entitled brats!
Peter Cooper's money ran out pure and simply - that happens after 170 years. Even if well invested, it happens.
I'm Class of 1959 CU (and I have bee generous to CU and will continue to be) - we were thankful as hell for the free tuition - but NEVER for a moment thought we were entitled.
Times change, life moves on - and some schools even close!

"Earlier today, Cooper Union officials announced that, for the first time, the school would start charging tuition, effective the fall of 2014." - Not so.

When the school opened in 1859 those who could pay tuition did so. It wasn't until the 20th century that every student received a full scholarship.

I am generally sympathetic to the (future) students – lord knows education, the arts, and art education could always use more support in this country.

There is a little something off in the tone of the protests, both the one going on now and the sit-in/takeover thing a few months back. It's just a little hard to get behind a bunch of people demanding something for 'free', especially in these times. Maybe they just need to come up with a better euphemism for 'free'. Like "support full scholarship" or something.

I do agree that whoever at Cooper had the idea to borrow a ton of money to gamble in the casino/stockmarket should be fired stat.

it's f*cking bullsh*t, the board is fraudulent crooks, and we are living in a godd@mn police state.

Hats off to the protesting students, good for you!!! there are many who have your back!

Respect the Founder. Peter S. must be howling in his grave. If the current board can't run the school they way it was intended, then either resign or close it. There is no rule saying the CU has to go on forever, but don't bastardize it. Man up and get out or shut down.

Are so many people addicted to soundbites that they didn't bother to read this?

"The Board of Trustees voted last week to reduce the full-tuition scholarship to 50% for all undergraduates admitted to The Cooper Union beginning with the class entering in the fall of 2014.

Under the new policy, The Cooper Union will continue to adhere to the vision of Peter Cooper, who founded the institution specifically to provide a quality education to those who might otherwise not be able to afford it. Consequently, we will provide additional scholarship funding for those with need, including full-tuition scholarships to students with the greatest need. We intend to keep admissions need-blind. Current undergraduates, as well as those undergraduates entering in the fall of 2013 will continue to receive the full-tuition scholarship for the duration of their undergraduate education."

They aren't ending full scholarships. They will keep admissions need-blind. What is wrong with the children of wealthy parents paying?

...peel off one trustee to have standing to sue for the removal of the rest of the board...

Alas, tangling up the current board/administration in court may be the only way to force Cooper to return to a (more or less) free tuition policy.

At least they're smart and talented kids. I have an altogether different reaction when students at City College - who are quite stupid and lucky to be in college at all - routinely protest modest tuition hikes.