More details on plans for the former P.S. 64 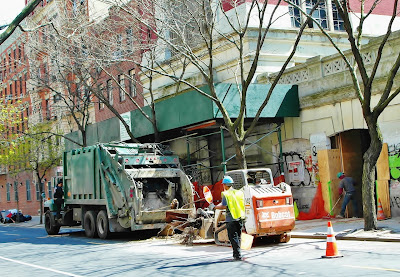 As the photo from yesterday shows, workers continue to clear out the former P.S. 64 and CHARAS/El Bohio community center. Per the building permit on file with the city: "INTERIOR DEMOLITION OF NON LOAD BEARING PARTITIONS."

As you know, there are plans on file to convert the building into a 500-bed dorm called University House on East Ninth Street just east of Avenue B. Earlier in the month, developer Gregg Singer said that he already had a 15-year agreement for 200 of the beds with Cooper Union, as The Wall Street Journal first reported.

And Singer sat down with The Villager for a lengthy feature in this week's issue.

A few highlights of what Singer says will be a state-of-the-art facility:

The basement — formerly home to a 400-seat auditorium where F.D.R. once riled the masses, and where the Fringe Festival was staged — would now house a bike room, fitness center, TV lounge and game rooms outfitted with pool, ping-pong and foosball tables, along with Xbox and PlayStation consoles.

And how about the idea of bringing 500-students into a residential neighborhood?

“Manhattan has almost 2 million people. These kids are already coming to the East Village,” [Singer] said.

“They are putting three to four students in studios around here,” he noted. “This is a safe and managed environment. Isn’t that better than cramming them in all these brownstones?”

“Unused as an elementary school since 1977, the century-old structure sat empty for the past 11 years,” reads an April 18 press release on the University House dorm. “The building occupies much of the city block, where its vacancy has inhibited local development and the growth of small businesses in the neighborhood.”

Councilmember Rosie Mendez is not pleased with the developments here.

Mendez said she met with Cooper President Bharucha to voice her displeasure.

“I told him I’m not happy with this dorm plan, the community is not happy,” she said. “There will be protests, and I will be joining in when that happens.”

Meanwhile, as we noted Tuesday, the East Village Community Coalition started a petition campaign that reads:

2 new sidewalk bridges arrive as city disapproves latest plan for P.S. 64
Posted by Grieve at 7:00 AM

Grieve, can you or someone else explain what the petition is actually suggesting happen? I'm all for it being "returned to the community" rather than bring in 500 college kids, but I'm not clear if any nonprofit has expressed serious interest. It seems like the theater proposal didn't go anywhere and would have only involved that part of the building...Thanks!

Since everybody seems to pile on the NYU / Cooper Union kids...I have to state clearly and unequivocally that I've never been bothered by them. All the ones I've come in contact with have been extremely nice and well behaved. Just my 2 cents...your experience may differ.

There is no fuckign community. Thats bulshit. All there is are transients students transnationals tourists and visitors. Those of us who reside here are allowed to. Its so nice of our owners to do that.

and how many people would actually use a community center?

at least with student housing the space is being optimized

it is mot necessarily the students but what such a huge population of students means to a neighborhood.
it means transients - a lack of community - a lack of respect for those that are not part of their college town - little or no participation in the community outside of the bars and restaurants (and in nyu's case the nyu transportation separates them totally from local people).
we are not a college town and most students treat this neighborhood as their party venue.
they are also the folks that do most of the shopping in the duane reade/7-11/$1 pizza shops.

8:53 AM:
There is no fuckign community. Thats bulshit. All there is are transients students transnationals tourists and visitors. Those of us who reside here are allowed to. Its so nice of our owners to do that.

I have no idea what you just said. 40 year resident of East 5th Street here.

This neighborhood has already absorbed such a huge quantity of a**holes, including yours truly...that a few hundred more or less ain't gonna make a difference. It replenishes itself. (Just my opinion...yours may differ.)

It's one thing if 500 students move into the neighborhood, living on several blocks in many apartments. It's another things when you move 500 students--or anyone for that matter--into one building on one block. And this project will inspire others like it.

We NEED that school. To be a school. A public school. Our neighborhood public schools suffer from horrendous overcrowding. There are some really great schools here that could use room to grow and stretch. THAT is what that building should be used for -- not as a means for this vandal developer to milk college students for glorified bunk beds.

Students live on 5th Ave and on 10th Street in the village and you hardly notice them. They spend a lot of money and will be great for the community.

What should really happen is that they should reopen it as a school, but that doesn't look likely. What are the real alternatives? Luxury apartments? As far as these things go, it's a pretty good plan. And they're not tearing it down!

Block this bullshit. Block Singer's every move until he sells it back to the city. Sure, he'll make a tidy profit, but at least we'll be investing in our future. For Pre-K in Manhattan, there's five applicants for every available seat. The school-age population of the city is booming. We have wonderful public schools and they're in demand, despite all the bullshit (high-stakes testing, school closures, city-subsidized magnets encroaching and taking up public space) that the pro-privatization Bloomberg Administration has thrown at them.

NYC college students of the past were an extremely radical political lot. Not anymore. Nowdays they are more or less bordering on right wing conservatism.

Look the issues are out there. This asshole took a legendary community center away from us and students are supporting him. As far as I'm concerned anyone who supports this plan is a douchebag. Not surprised at all.

@ Fashion by -- Check out the Boys Club on 10th to see just how well used a community center can be. It's beehive, wonderful to see. And a Community Center would be one of the few amenities for the many non upscale residents of Loisaida. And have you ever tried to find space for a grassroots meeting here? Our needs in this community are so clear. A dorm serves -- the school and the bars. And Singer.

How about some affordable middle class housing?

(my two cents...which is just about what I have left after NYC rents)

Please sign EVCC's petition and email the DOB Commisioner with your concerns:

Stringer and his cronies must be lookign at this website. No one within a 10 block radius wants a dorm here.

I have no problem with the existing building being converted to a dormitory. I did have a problem with the site being turned into a high rise. Students need a place to live where they can be supervised. There's nothing worse then students moving into apartment buildings ruining the quality of life for other residents. I don't think this is going to be much of a problem