Last we heard, there were still plans afoot to convert the Congregation Mezritch Synagogue at 415 E. Sixth St. into condos. The historic building in the new landmark district is in bad shape and the congregation has apparently dwindled.

Last month, CB3's Landmarks Subcommittee heard a proposal about the renovations, which include a penthouse addition and an elevator. Synagogue leaders reportedly signed a 99-year lease with East River Partners worth some $1.2 million.

The committee tabled the discussion for another meeting, as DNAinfo's Serena Solomon reported. (The proposal was set to go before the Landmarks Preservation Commission on April 9. We never heard what transpired at that meeting.)

There still aren't any permits on file with the city related to the latest project. Meanwhile, several readers have noted activity here between First Avenue and Avenue A... this afternoon, EVG reader Stephanie spotted workers removing items from the synagogue... 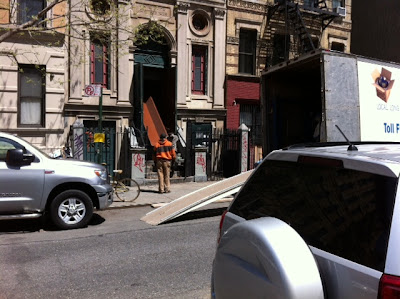 Yesterday, a resident complained to the city that: "ILLEGAL CONSTRUCTION RENOVATION BEING PERFORMED WITHOUT VALID PERMIT."

According to the DOB, when an inspector arrived for a second visit, "ACCESS DENIED BY MALE AT GROUND LEVEL ENTRANCE DOOR." 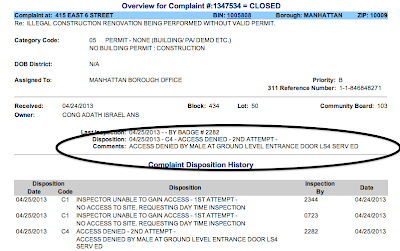 Previously on EV Grieve:
Play spot the potential penthouse atop the East Village synagogue
Posted by Grieve at 1:55 PM

So on the second attempt by an inspector in performace of their official duties, why aren't they accompanied by a police officer? Or do we have to wait until someone is injured or worse, or the adjoining property is damaged by illegal construction for the city to get up on its' hind legs and enforce its' own damn laws?

So does they now pay property taxes like everyone else?

Did you make up the word condofication? I like it!

I think I picked it up from Curbed editors through the years... Condoify is good too.

DOB has ALWAYS been the single, most corrupt agency of the entire NYC bureaucracy. Since the first shack ever built on the island.

They were removing pews and other architecturally significant items so that interior demolition could begin. The interior looked fine -- just old and neglected. When I tried to take photos, the guy who gave the movers access objected, telling me that I was interfering with their "construction" work.