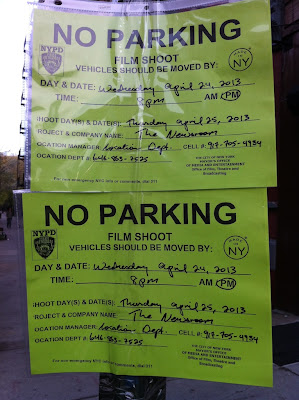 You may have sign the signs up like this one on East 12th Street... Aaron Sorkin's "The Newsroom" will be filming in parts of the neighborhood today and tomorrow...

Dave on 7th, who took the photo, asks, "Wonder what big news event they'll be recreating?"

Oh, and the second season starts on HBO on July 14. Guest stars this season will include Jane Fonda, Patton Oswalt and Marcia Gay Harden.

Another show that I've never seen. Anyone?
Posted by Grieve at 5:30 AM

Great show with a great cast, acting and writing, Newsroom ranks just behind the best show on TV which is Homeland. It uses current events, delayed about a year, to build plotline about how the news media works and how it would really work if people were smarter and more honest about reality. I bet they go for the more current stuff now with the tragedy of the Boston bombing, which is a like a movie of the week that never seems to end. But Homeland has already covered the homegrown terrorist territory, like Star Trek and the Joker its always ahead of the curve, no wonder it's Obamas favorite TV show.

It's a pretty bad show. It started out promising, but devolved into simple-minded attacks on the Republican Party (very attackable, but this show did it in such a silly, heavy-handed manner) and its inter-character relationships were ham handed and idiotic. I will not be watching the second season. Bleah.

I agree, I try so hard w Aaron Sorkin, but nothing will ever match up to the first few seasons of The West Wing. Sure, given the benefit of hindsight and with some fictional idea of the economics of cable news, anyone would cover current events properly, but thats just not the case. CNN has done a laughable job proving this recently.

I personally think Chris Hayes is the closest thing we have to The Newsroom, and he covers actual news, and I still like him better than Will McAvoy. I see him riding his bike around town also, so thats cool.