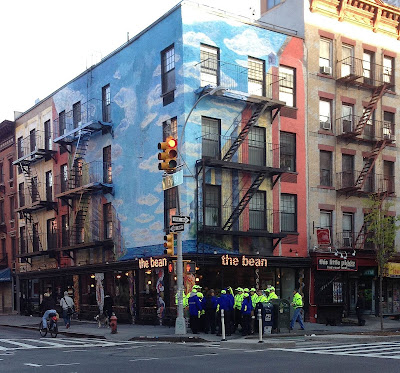 Early yesterday morning, we noticed a group of DOT employees congregating outside the Bean on First Avenue and East Ninth Street...

A DOT news release offers up an explanation:

Managers complement commercial cycling education and enforcement efforts, come in advance of May Citi Bike launch
New York City Department of Transportation (DOT) Commissioner Janette Sadik-Khan today announced that DOT Street Safety Managers (SSM) are assigned to key bike and pedestrian corridors and bridge paths in Manhattan to help enhance safety among pedestrians, cyclists and motorists, further enhancing street safety as bike ridership grows, as DOT starts enforcement of commercial cycling laws and in advance of the 6,000-bike launch of the Citi Bike system. The SSMs will monitor locations with dense pedestrian and cyclist activity to reinforce existing traffic rules, advising bike riders to ride in the direction of traffic, yield to pedestrians and stop at traffic signals; instructing pedestrians to await traffic signals on the curb and not stand in bike paths; and discouraging cars from parking illegally in bike lanes. Shifts of four SSMs will be assigned to different locations in Manhattan weekdays during the morning and afternoon rush hours from April through October.

“Our streets have never been safer and we’re educating everyone on how to use them safely, and enforcing against those who don’t,” said Commissioner Sadik-Khan. “With more people out in the warm weather we’re committed to doing even more to get out the message that safety is the rule of the road.”

EVG reader @malusbrutus passed along this photo from yesterday at Second Avenue and East Ninth Street ... 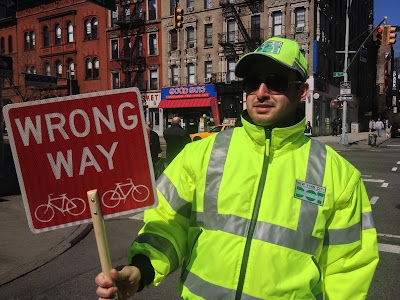 He notes that the DOT personnel are not issuing citations, rather just offering warnings.

"In related news, police officers regularly stand on the north side of 14th street and 1st avenue to ticket cyclists who break traffic laws on their morning commute."

The bike haters at the Post has a piece on this today.

Taxpayers are forking over cash so a small army of city DOT employees can baby-sit rogue cyclists, reminding them of the basic rules of the road so they don’t pedal into pedestrians.

Read more, including some local reaction, here.
Posted by Grieve at 6:10 AM

The Post has some interviews with locals in the subject:

Yet again the Post shows itself to be the best news source in the City.

We live in a city where more and more people need babysitting. Sad.

From all accounts, NYC is more "adult" then ever. That's part of the problem. Every decision must be very rational. Policy is based on rationale such as public safety and material prosperity.

So in other words ; everybody is getting the smack-down here.
Yet car drivers will continue to run red lights, speed, drive in parking lanes, pass on right, talk on cell phones, stop inside cross walks. (oh yeah) and hit, maim, and kill people in record numbers (Hey drivers, no worries. As long as ya don't run after the fact, yr cool. No harm no foul )

Perhaps they can walk around the corner and deal with the ridiculous number of bike delivery people outside of Motorino, who not only crowd the sidewalk, but also constantly ride their bikes down it?

I saw teams of 2-3 of those nannies in day-glo yellow-green vests at every intersection along Second + First Avenues yesterday with their stupid signs, telling bikers to "slow down" or that there was a red light ahead.

I don't need these fucking morons telling me how to ride a bike in my city. If the intersection is clear (no cars/no people) I don't have to stop at a fucking red light!!

Unlike food delivery people who race electric bikes at more than 30mph on sidewalks, I'm extremely careful when I ride, applying the rules of the road.

Every real biker knows that the safest place to ride is in the middle of the street -- the bike lanes, in which trucks and cars park, and in which people walk and stand, are designed to corral bikers and generate revenue from those who deviate from the herding.

You have to be a moron to see if you ride a bike cross town you take your life in your hands. The only ped's not j-walking everywhere and anywhere are the European Tourists. I have women push their baby stollers into me while looking right at me. So idiots blow lights ticket them but the problem is not the cyclist. A good add program explaining how to act while riding a bike would help like leave room for someone else in the bike lane especially runners. I invite the city to ride a bike with me around the city.

Traffic is pretty chaotic around here, but it always was, even before everyone started pedaling. Car traffic is a mess, foot traffic is a mess and now bike traffic just adds to the mess. Everyone's at fault. The way I see it it's every man for himself. I know that I feel totally on my own out there. I try to never rely on a car yielding to me. On the other hand I do what I can to avoid terrorizing people on foot. It's almost useless because they will typically stop and wait for me to run the red anyways, because they are so accustomed to bikes running reds. I don't care, I stop anyways, in my mind it is absolutely the right thing to do. I am always surprised not so much at bikers running reds but the kinds that do it, its even meek looking girly girls on their silly cruisers, will just plow right on through crossings, practically grazing the noses of pedestrians who have right of way. And they seem oblivious to what they are doing, that is the maddening part.

I try not to pay too much attention to all this controversy because I have a feeling this whole walkers vs bikers vs cars dialectic is going to rage on til the end of time. Like I said every man for himself out there.

Well anon 2:16 I am a real biker and you'll never see me riding in the middle of a street. 30+ mph on a bike is pretty damn fast, I wonder how you manage to keep up with car and truck traffic at those speeds. You talk a big game for sure. I'll take my chances in the bike lane, if that means risking a spill with a pedestrian, I'll take that. You act like there's no risks or reckless behavior out in the middle of the street. Frankly you sound like kind of an asshole.

Can runners stop running in the bike lane? Can cars stop parking in the bike lane? Can delivery guys on electric bike's be recognized as motor vehicles? Can delivery people stop ridding like salmon (the wrong way) and playing chicken with those of us who ride the correct way? It's endless the douchbaggery that happens daily and it's completely sad that we need nanny's to patrol the nonsense.

Thank you Anon 6:28. Most of the bicyclists are selfishs narcissistic assholes who think they are renegades in the big city. This asshole Mayor and the garbage Khan that he brought in from Portland have imposed this bicycle mess on the citizenry without doing their due diligence. They should have had 'monitors' (babysitters) from the beginning with an advertising campaign and enforcement from the beginning. However this being the city that barely works with an imperious asshole mayor, they are only now playing catch-up with the horse having left the barn. At least these belated assholes are finally taking action with the E-bikes flying all over the place.
The power structire in this fucken city really has nothin but ASSES for Brains.

As much as i dont want more babysitting in this already over policed city but you.really do have stupid people that stand in bike lanes with.their back to traffic and try to sue when they.get a free proctokogy exam from a pair of handle bars.

Well put. As a pedestrian who also cycles alot and drives. Its not a lack of rules problem, or a bike or car or people problem it the nconsiderate idiots in each category that makes each camp sound right. Every man for himself, if you cant deal, get out of the way.

I use the 2nd ave and 1st ave bike lanes and too many dolts go the wrong way. They should be beaten and given a ticket. Then thrown into the bus lane to die a slow death. (yes this would include me)

Thank you mr. mayor for making it so unsafe for us pedestrians.
Bicyclists do not know to stop at the red lights. They bike like cars. On the FDR drive where you would never ever dare to go, they fly by w/o any respect. Thank you Bloomberg. Just like your 3rd term that was imposed on us, we now will have more bikes w/o any monitoring.

A NYPD officer who was in an unmarked car issued me a citation this morning for not stopping at a red light.

I actually did stop at the red light. This was in a quiet neighborhood in Tribeca and the traffic was really light.
I let the three cars crossing over Hudson Street pass by, and as there were no more cars coming down Franklin Street, I crossed the Hudson to continue my commute to my office. This is when the unmarked NYPD car (who was the last car of the three crossing over Hudson) swerved and pulled me over. I just couldn't believe it. No warning, either -- just a traffic ticket for who knows how much money. WTF. Is this a money grab?

Does this mean I get points on my drivers license?