[Updated] 'Street Safety Managers' back on the East Village streets 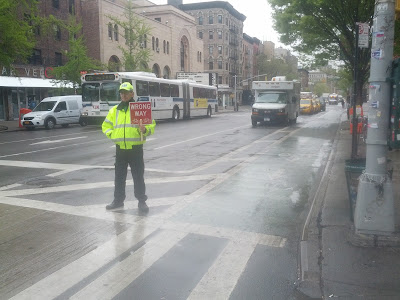 This is becoming a common sight now weekday mornings... the presence of so-called Street Safety Managers.

To refresh your memory, per a DOT news release:

EVG reader John took these photos... he chatted with the manager on duty this morning on Second Avenue at East 11th Street.

Per John: "They alternatively show a stop or wrong way sign to the bike lane as the lights change ... and he thinks the 'worst' corridor is 20-30s & Broadway."

"He seemed pretty upbeat about being in the rain, shrug. Not too many bikes around now but they seemed to obey the sign." 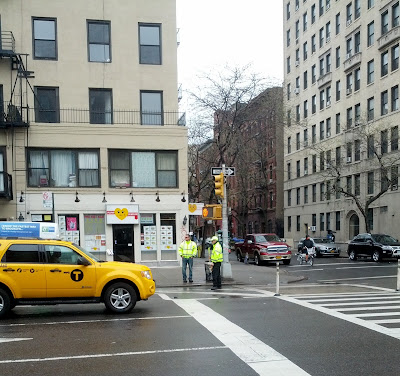 And here's a shot on First Avenue at East Ninth Street from 10:30 a.m. via EVG regular Derek Berg... 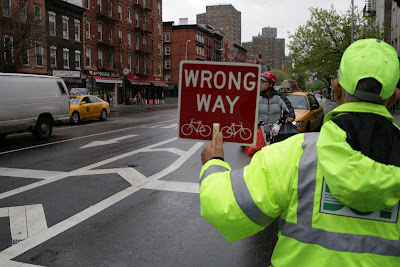 The delivery guys are big offenders and go very fast with their motorized bikes.

For as much as I complain about the bike lanes, I appreciate an effort is being made to get people to follow the rules of the road. I don't know if they will be successful, but at least they are making an effort. I hope the cyclists are listening and not giving them a hard time.

As a daily bike commuter, I definitely do my best to follow the rules, and I do appreciate these guys out there, not only does it keep us bikers a little more honest, it raises awareness for the pedestrians and car to watch out for the bike lanes. I've been known to blow a light here and there, but I'd rather a friendly person asking me to stop, then a ticket from NYPD.

Rainy day today so not a lot of bikers around, but I saw a few just go right past a DOT employee and through a red light. The DOT employee either didn't care or was too buys on his cell phone to notice.

Agree, the rules of the road ought to be given more respect, by everyone who uses it. You're all douchebags.

either broadway/5th ave needs to be bidirectional, or park ave needs bike lanes. biking from, say, union square to madison square park is absurd for those of us who follow the lane directionality.

It makes me a little crazy when I see cops ticketing cyclists on the First Ave. bike lane because of the unevenness of the enforcement -- motorists being free to blaze through quiet residential streets at 40mph anywhere in the city with virtually no chance of getting a ticket, or of going to jail if they run someone over. This approach, plus speed cameras and hefty fines for the cars, seems like the way to go.

Do these guys qualify for pensions after 20 years of holding up these signs?

Until they can give actual $$$ tickets they are worthless.

No, they're really not worthless. People -- some of them, at least -- respond to those cues. And as more people stop when they're supposed to (Idaho stops, anyway), it begins to change the riding culture from cowboy to Copenhagen.

Didn't the motorized bikes get banned?

According to the Post, these people were "specially trained by contractor Sam Schwartz Engineering." How much training does it take to hold up a sign?

The First Ave bike lanes is a chaotic, overpoliced nightmare. I will go out of my way to bike up Third Ave (no bike lanes) instead.

It's only a matter of time before they start writing tickets to justify their existence...they put in effect a bunch of new bike laws for these guys to write tickets off of like for example having no headlight or taillight, a broken or no bell, a missing reflector, not using hand and arm signals to turn, stop, or decreasing speed and a bunch of other misc stuff for delivery guys.

yes anything with a motor is banned unless you can register and insure it as a motor vehicle (i think it has to go a certain speed to be road legal, not sure) like a electric moped, like those fast scooters with pedals that alot of delivery guys use..then you need a motorcycle license to be 100% legit.

Motorized bikes are "not legal" and therefor (believe it or not) basically considered "outside" of the law. i.e. there essentially is no written law specifically regarding these vehicles.
If you need a translation, it is this: Motorized bicycles are not authorized for use in the city. However, nobody is going to do shit about them.
Free pass for motorized bikes. (aka: delivery people)

I am happy to oblige with the rules of biking in the city...but if the "safety" guys are really going to ensure bike safety they need to talk to all the trucks parking in the bike lanes, cars cutting off bikes when they turn left through the bike lanes, etc etc.

I don't need sign-carrying street nannies telling me how to ride my fucking bike!!

They would be put to better use by keeping bike lanes clear of folks standing, walking and running in them, and of delivery trucks and other vehicles parking in them.

The writing is on the wall: they create poorly-positioned bike lanes that reduce parking spots for cars (which keeps cars driving in the streets longer, looking for parking) and then ticket bikers for not using them.

Then they flood the city with thousands of pay-to-use bikes, which will result in that many additional bikers unfamiliar with riding in the city, getting into and causing accidents in addition to overcrowding of bike lanes.

Next, they'll be requiring that bikes be registered like cars, for an annually increasing cost, of course!

Riding a bike in my city was never a problem until now, and they're seemingly hell bent on making it harder and expensive to do so....

@ChrisFlash - Naturally, I don't want to agree with anything you say, at least not in public, so I won't bother to point out that you're right that it would be good to keep the bike lines clear, but there are only two ways to do that. One is to get the cooperation of the police, because they are the ones who can issue tickets. The other is to put more bikes into them so that the pedestrians, at least, get the idea (won't do anything for trucks and cabs, though).

You're wrong about not wanting more bikes around, though. Lots of experience, here and elsewhere, has shown that the rate of bike/car and bike/pedestrian collisions goes down, and usually WAY down, when you put more bikes into the streets. Maybe you don't see this because it's somewhat counterintuitive, but it's in your interest to have more bikes on the street, assuming you want to stay alive and that you want other bikers to stay alive as well.

Let me know if I assume too much, though.

All this anti-bike sentiment is totally misguided. Because biking is counterculture, its subversive, its independent, its libertarian, green, etc. All the things the man doesn't like. Paying $2.50 to ride a noisy, inefficient, slow-moving bus a measly mile across town, that is exactly what the man wants you to do. Sorry that all you so-called counter-culturers, so-called aware people cannot see that. You would call yourselves cognoscenti but face it, there is so much that your shackled ideology ("this is real new york, that is not") keeps you away from. Ever wonder why bicyclists tend to be so smug? It's because getting yourself from point a to point b, doing it faster than an MTA bus using locomotion that you created with your own body at almost zero operating cost, is very satisfying. I would say try it but I won't because you don't deserve it. You deserve to keep crawling along the congested sidewalks at 3mph. Friggin snails, keep waiting for that M14 or the loser L train.