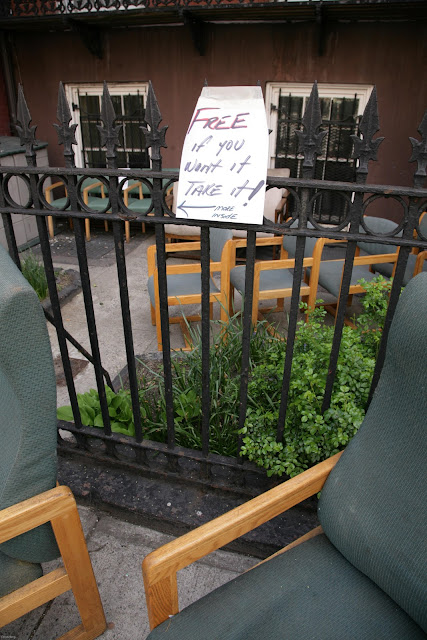 This was the scene a little earlier outside 110 Second Ave. near East Seventh street... a lot of free chairs. (Have no idea if they are still there.) Photos by Derek Berg. 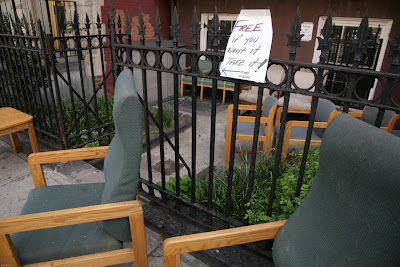 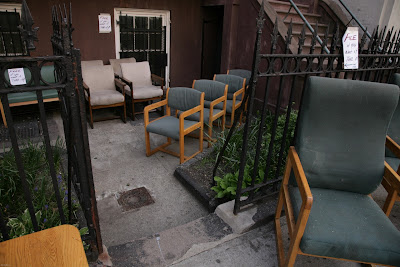 Anyway! Lots of history at this address — the Isaac T. Hopper Home, a circa 1839 Greek Revival townhouse that serves as a halfway house for female prisoners.

The Times had a feature on the home a few years back:

In 1846, The Evening Post said that there were “two great avenues for elegant residences”: Fifth and Second Avenues. Construction on Second had already produced chaste Greek Revival houses like No. 110, built in 1838 and soon occupied by Ralph Mead, a merchant on Coenties Slip. The simple red-brick front is relieved only by a projecting portico with brownstone Ionic columns — the Greek was a movement of buttoned-up reserve.

By that time Isaac T. Hopper was famous in New York as an uncompromising reformer and abolitionist. On his death in 1852, The Liberator, an abolitionist newspaper, said that “the fugitive slave, the unfortunate criminal, the children of poverty, all commanded his warmest sympathy.” From his work evolved the Isaac T. Hopper Home, devoted to helping women who had been released from prison.

Read the whole article here.
Posted by Grieve at 12:39 PM