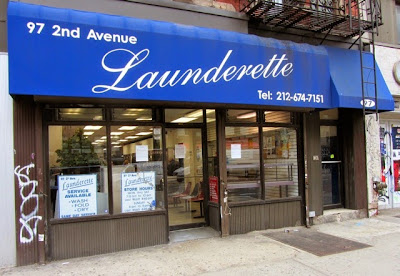 The longtime laundromat here on Second Avenue between East Sixth Street and East Fifth Street is closing... some time in August, most likely.

EVG regular peter radley shares these photos... and the sign on the front window goes into great detail about the situation here... 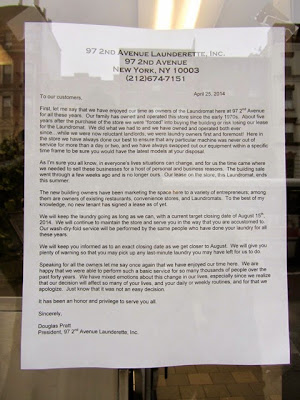 Douglas Pratt, president of the Launderette, discusses how his family operated this laundromat since the early 1970s ... that they were "forced" into buying the building a short time later or face losing the lease. However, more recently, the family had to sell the building here at 97 Second Ave. "for a host of personal and business reasons."

According to the letter, the new owners are courting a variety of tenants — restaurants, convenience stores and laundromats. As of now, Pratt doesn't believe a new tenant has signed a lease.

If you really need it, the anti humans will take it from you.

Is this supposed to be a sympathy play? Sounds like they are cashing out pretty nicely by selling a building they bought in the 1970s (and we all know what prices were like then).

That was my laundromat for years. A lot of good bad memories.

This is going to be such an inconvenience.

Any recommendations for laundromats or drop-off services nearby?

This is sad. I used that laundromat for several years and have to say it's the cleanest one I've ever experienced. Loved the portrait of the Kennedys in the back...I wish them well.

Someday maybe soon a young professional or NYU student paying $2800 for a one bedroom apartment in a 5 story walk up apartment building will have no place within 8 blocks to schlep her laundry to. I do however see a pick-up and deliver laundry business idea here.

So Sad! I've been using this laundry service for the past 14 years - ever since moving into the east village. The old man and the ladies in the back are so nice. I will miss them :(

Why does everything have to "change"?

Great Laundry, great people, it will be missed

I don't know if he's related to the owner, but that old guy who worked there was a complete asshole. Sucks to schlep my laundry another few blocks but good riddance to that miserable prick.