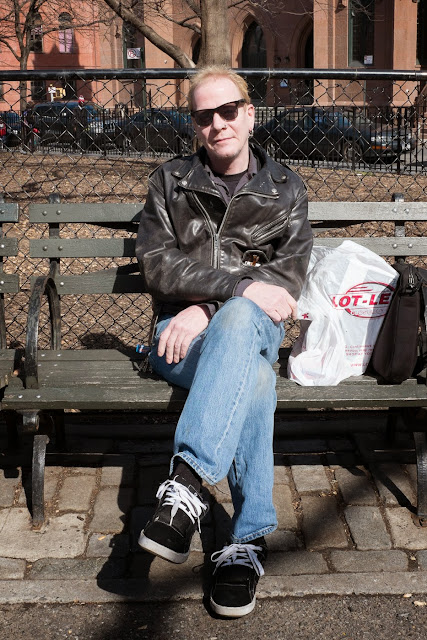 I’m from Midtown but I went to school on 11th Street and 2nd Avenue. I moved down here in 1987. Music and art attracted me to the neighborhood and I was working around here and all my friends were here, so it was natural.

I was also in a rock band — several, actually. From that period of time, my favorite was the Fabulous Barbatones, with James Romberger. I played drums. Because I was working for landlords, I was able to rent places cheap, so I was able to get a basement on 3rd Street on the Hells’ Angels block and I built a recording studio.

I worked with a lot of bands and played a lot of places. It was always really convenient. If we had a gig at CBGB we wouldn’t have to get the man with the van, we’d just bring up the trap case on wheels, load stuff on it and wheel it around the corner. East 3rd Street was the safest block in the whole neighborhood and it still is. Right next to the 9th Precinct on 5th Street, somebody was going to steal the front wheel off your bicycle or take your seat. They’d strip your bike right outside of the police precinct but that would never happen on 3rd Street.

At the time there was a lot of drug dealing in the neighborhood and there was always the abandoned, stolen car out there up on blocks, and we’d use it as a dumpster. If you were doing renovations, you’d have to find someplace to dump your plaster and we’d just put it in the back of those stolen cars.

In 1983, I had this opportunity to rent a storefront for $250 a month. I had been thinking about it for awhile, so I started an art gallery. Since all my friends were artists, I thought it would be cool. I did a little art too and I went to art school, but nothing much. I felt that my friends, because they were really applying themselves much more than I was, were doing better work than I was. The first gallery was called Nolo Contendere and then a year and a half later I broke up with my partner, so I decided to use a name that nobody could take from me — my own. So I started the Jon Gerstad Gallery.

It was very vibrant when we first started. There was great artwork going on down here. People uptown and in SoHo had no idea what we were doing here. They couldn’t fathom it. Now easily a dozen of those artists, both dead and still alive, are famous. Maybe 20 galleries or 25 galleries moved to SoHo if they had the money, and you could get a sizeable loft in SoHo for like $2,500 or $3,000 a month, but that was never in my budget.

The gallery was open for five years, till ’87, until Michael Musto said on the front page of The Village Voice, ‘Downtown is Dead.’ I was one of the first six to open and one of the last six to close. It ran its course. It got the point where housewives from New Jersey would rent storefronts to show their friends’ bad art, which had nothing to do with the East Village. The scene just got overly diluted.

Great interview. That's what I heard in school, that the gallery scene started in the East Village then moved to Soho. There was a lot of possibility back then because of low rents. Nowdays your paying rent and that's everywhere in NYC. The cheapest studio apartment in any of the boroughs is probably a thousand dollars.

The Barbitones was comprised of bassist Julius Klein, the late poet/guitarist Jerry Loomis, filmmaker Elmer Lang on keyboards, Jon on drums and I played rhythm guitar. We each rotated singing songs we wrote individually and we were joined for several gigs by the late gallerist Colin DeLand on saxophone.

The partner Jon refers above in Nolo Contendere gallery was Jennifer (Ex) Bowen, who continued to run the gallery for some while after Jon left.

Jon was on a ladder in my kitchen last night, fixing the electric! He is pretty much that guy that everyone calls when they need to figure out how to do something.

I've seen him around. Interesting story. Lotta people from years ago live upstate now and do their painting and art there. Some people still keep a place here and escape to upstate.
that's hilarious that people would use the car as a dumpster. One time when I was a kid back in the 70's nyc my dads car was on boxes. Another time they tried to steal the hubcaps and my dad and uncle ran after the guy.

One can chart the REAL history of the EV/LES, for the past 30+ yrs. on the back of Jon. Through his many endeavors, as a gallery owner, rock & ready drummer, studio owner & all-around engineer, he has been an enthusiastic participant and has provided support for many, myself included. Thanks Jon(E)

I second Julius Klein's emotion. Jonny surfs the edge, he lives to see and participate in all that is great and interesting. While nothing on Earth is perfect Jon just has this knack to keep the beat going when all systems have failed. He's been a great friend, ally and studio partner.

This article speaks of years long past, it does not give him credit for the great stuff he's accomplished and encouraged in the here and now. Being an accomplished musician and lover of the craft he is a partner and the creator of one of the last independent music recording studios in the East Village called Sounds Right Sound. The studios 18 year history provided very inexpensive (mostly free) recording and rehearsal services for bands like Jiggers is King, Crime Story, St. Bastard, Furniture, The Spills, The Jennifer Blowdryer Band, The Blueberry High Heels, Sugar Tits, Love Bomb 69, Tickle It and more. The studio has been under siege by Steven Croman aka 9300 and will more than likely close it's Bilco door on 44 East 1st Street in June 2015.