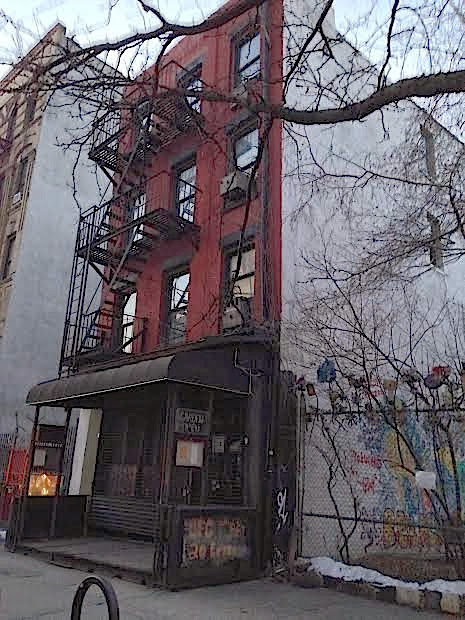 The Sunburnt Cow, the drunk brunch hotspot at 137 Avenue C near East Ninth Street, will close at the end of April.

Here is the message via the Cow's Facebook page:

Following the devastation of Hurricane Sandy we are sadly calling it a night…But let's make it a night to remember!! 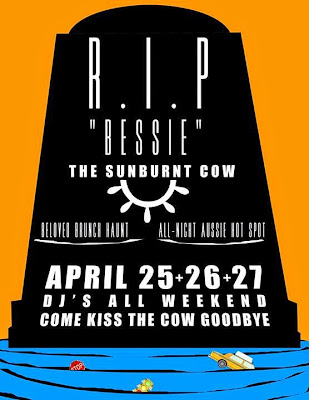 Almost exactly one year ago a listing for the place appeared on the Misrahi Realty website.

On March 28, the city OK'd a plan to renovate the entire building.

Per the DOB's all-cap job description: "INTERIOR RENOVATION OF FIVE STORY MIXED USE BUILDING AMENDED CERTIFICATE OF OCCUPANCY WILL BE OBTAINED." The DOB lists Ramy Issac, no stranger to the East Village, as the architect of record.

The Moolife Group, owners of the Sunburnt Cow, closed Bondi Road in September 2012 after a six-year run on Rivington Street, as BoweryBoogie reported.

Previously on EV Grieve:
Renovations in store for 137 Avenue C, home to the Sunburnt Cow
Posted by Grieve at 2:12 PM

Email ThisBlogThis!Share to TwitterShare to FacebookShare to Pinterest
Labels: the Sunburnt Cow

I once saw a fight break out in front of this place that started with one bro yelling to another bro "I make more money in a week than you do in a month, bro!"

While I don't like to see businesses fail, I cannot say I'm sad to see all those upper east side 21 year olds go. And this place just looked dumpier and dumpier.

Couple of weird things on that approval of the plans: It says there's going to be additional storys, but then later it says "no" to "Structural Stability affected by proposed work" in Section 9. Also, it says the site is not in a flood hazard area -- at which I beg to differ -- and that this is a corner lot.

that building is already leaning - unless someone invests a huge amount into repairing the foundation and righting the structure, it's just going to get condemned by the city as soon as inspectors get there to look into the proposed work.

someone needs to tear it down and start over, that building is full of rats, major plumbing issues

Good riddance. Bye Bye to Heath and the rest of the MooLifeGroup. Your establishments were a reflection of your CEO and NYC is better off without you.