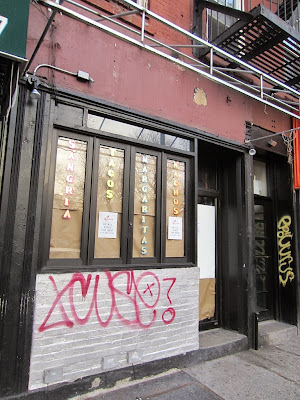 Word is now that high-profile restaurateurs Ken Friedman and April Bloomfield are eyeing the former San Loco location for a cafe-bar concept that would be open early for breakfast … and late night for cocktails (with lunch and dinner in between). The place would curate a specific coffee, wine and cocktail program.

This application is on the May CB3/SLA agenda released yesterday (though their names aren't on it just yet).

Friedman and Bloomfield own such places as high-profile places like The Spotted Pig, The Breslin and The John Dory Oyster Bar … while Friedman has teamed with the likes of Vanity Fair editor Graydon Carter at The Monkey Bar and Taavo Somer at The Rusty Knot.

Avenue A looks to be going even more upscale in a hurry … with projects such as this, the all-new 7A and Alex Stupak's new Mexican restaurant at the former Sushi Lounge space.
Posted by Grieve at 5:30 AM

upscaling means sidewalks jammed with even more tourist, foodies and hipsters flooding the avenue and the end to simple affordable places like San Loco.

Yeah, upscale. Look around you, restauranteur. Get the fuck out.

we need more fancy restaurants serving $30 foam creations.
we need more sidewalk tables because we are not congested enough.
but what we really need is more bars. there aren't enough places for the droves of under-age students and tourists that swarm here EVERY DAY AND NIGHT.
perhaps we need a 24-hour bar.

you can't get a sit-down cup of coffee on the weekend anymore.
we live in times square. and maybe it's quieter up there these days.

We do not want you here. Please go somewhere else with your high-priced drinks that we can't afford and your snobby service that caters to celebrities.

Go elsewhere. We don't need yet more precious crap not meant for the likes of neighborhood residents.

I understand and respect this criticism, but their signature restaurant the Spotted Pig is a consummate neighborhood spot in the West Village. It's unfair to judge them prematurely until there
s more information about their plans. Sounds like this could be exactly the kind of place you could get a sit-down cup of coffee on weekends.

Don't blame Ken or April. Blame the landlords, zoning board and city council for not having any public policies meant to protect independent businesses in NYC. It's pretty simple: let it turn into a bank or chain store or allow the space to become something *some* people will actually enjoy. Not every new spot needs to be an "everyday" business, mom-and-pop or neighborhood restaurant. Hearth is a special occasion restaurant (for me) that I'm glad is in the hood. Same for Alder, Ko, et al.

Ken and April's PR minions have joined the comments.

The Spotted Pig is not a neighborhood spot. It is a place for celebrities to go and for people who like spotting celebrities — namely tourists.

Seriously, publicists, stop being so publicit-ty if you're hoping to pass as a general commenter and not someone on the payroll. Helpful hint: Do not use phrases that no normal person would ever say, such as "consummate neighborhood spot."

Asshole restauranteurs will pay high rents and landlords know this. High priced drinks and foodie shit sold to tourist is the only way to pay for the inflated overhead these places bring upon themselves. Everyday one of these crappy new restaurants closes after a run of 1 or 2 years at best but as long as there are takers for cramped spaces on the avenue don't expect rents to stabilize any time soon.

How is this a neighborhood restaurant:Website
http://thespottedpig.com/
Menu
read the menu
San Loco had a special for schoolkids for 5 bucks and 6 dollar burritos.

I have a few key questions: will this be a truly upscale establishment and serve live fireflies in the artisanal drinks? Will they also charge to use the restrooms like Balthazar where it costs an additional two bucks per fart? Also, will the preferably organic locally-grown fireflies be dead or alive when they come out the other end? And if they are alive, will they responsibly recycle and re-use the fireflies in the next person's drink, or is that against the health code?

Yeah good food is the worst.

The SLA is a NY State department. So, until we get our NYS elected leaders to change the rules by which the SLA operates this is not going to change.

It must be an organized campaign where we hire our own lobbists and petition our state senators and assembly members. Or, we can just snark here and continue to watch our neighborhood get reinvented by people how live nowhere nearby.

And yet another douchery in the EV.

Great to see the neighborhood rally around opposing this.

Neighbors and friends, it would help if everyone showed up to CB3 event and held signs and stuff. We've been able to effect some change and what gets approved at these events.

Not everything that ever wanted to open on Ave A has, and in many cases those that did we were against didn't last long because of 311 bombardment and community opposition.

So come to the board meeting and hang out, and get up to speak. It does matter. This application is in a saturation zone and therefore they are going to have to bend over backward to get CB3 approval.

Nothing is a done deal until it actually opens. Keep that in mind.

@bowboy - while I appreciate what you are saying about the SLA, there are a couple of things to be aware of:
There is legislation now started by Daniel Squadron that would put some meat on what defines a "public benefit" which is a requirement for a liquour license within 500 feet of any other licensed location. CB 3 endorsed it a their meeting last evening.
Secondly - there are activists all over the hood fighting these liquor licenses every. We don't just bitch on this blog, we organize meetings, we stand in the rain and cold getting petition signatures and testify at CB 3 meetings every month, where we often sit for hours, get abused by the applicants and even members of the CB. And guess what we have been successful in many cases, remember SuperDive, remember Habibi Lounge, remember Sin, Sin, the list is long my friend.
So if you would like to join any of these efforts feel free, but please don't make comments that demean our efforts.

Thanks for the warning. The douche bags have won. I surrender.

Revolving door restaurants are the new normal. People with bored wealthy backers or too much time or money on their hands keep opening these type of "themed' places like we are in fucking Disneyland. I use to be friendly towards tourists now I can't stand looking at them. The "Infantile trend" which is about make everything cute, soft and non-threatening, familiar is soulless and attracts the gullible tourist or asshole foodie blogger.

2:16, I don't ask this to be rude, but did SLA really have anything to do with Superdive's closing? I thought it failed because the owners were completely half-assed about maintaining normal hours and because the keg concept (not to mention the illegality of pouring your own drinks and overserving) was doomed to fail. And I feel like we had to put up with their trash and noise for quite a while before they packed it in.

The SLA is the only agency with jurisdiction to take away a liquor license and they have an enforcement division (or at least an enforcement guy, Mike Jones). Combined with local police who issue fines and violations for illegal activity, which usually accompanies the worst operators, it all adds up to creating a scenario to shut a place down. However, none of it happens if the residents don't formally complain and get the attention of the authorities.

So, Miss Lily's sucks because its too cool, this place sucks because its too celebrity oriented, Mars bar reopening because past is past...the pattern is clear and a bit boring, because a lot of people want the only thing that will never happen again and that is the EV of 1982. Can we look forward for a second? i think what we (mostly) all agree on is that we don't want 7-eleven and other similars, and we are deeply bothered by the woo-hoo crowd and brooooo crowds, so let me just add some food for thought. Don't you think that the upscaling of the neighborhood's bars and restaurants will bring to a diminishment of the crowds that turn this hood into another place on weekend nights? If 10 or 15 more of the average bars, hookah joints, and eateries around here close and become something fancier, especially east of 1st, won't this help make the hood quieter and also more local?

Why should we have to choose between fratties and the nuevo rich douchery. Most of us who have lived here a while, don't want either.

Because: Not Normal is the New Normal.

The Spotted Pig is a consummate neighborhood spot if you are the proprietrix of GOOP.

Michael you don't understand, when chic high rent paying restaurants move in there will be now room for affordable restaurants to operate. Its the same with apartments, a trust fund kid rents a pad in your building for $3000 while you a long term tenant (which stuck in there through the rough years) is rewarded with an eviction notice. The EV is a special place in Manhattan all that will disappear soon and sameness will rule.

I posted that comment about the Spotted Pig being a consummate neighborhood spot and am not a PR flack for the restaurant group. The WV happens to be full of celebrities and rich people, so that restaurant fits right in. Who is to say that this new place wouldn't similarly fit into it's surroundings? It's very small scale and has a menu/concept very much in line with other (seemingly beloved to this group) area spots like Cafe Pick Me Up. I was just suggesting that we not prematurely jump to conclusions and negativity when something is still in its nascent stages.

There is no concept here other then to secure a foothold in the EV to expand a growing restuararnt/cocktail lounge empire. Cafe Pick Me-Up doesn't have a full liquor license and doesn't stay open until 4am. If this guy gets a full liquor until 4am is that fair to Cafe Pick Me-Up and other places who have been here for sometime? It is an unfair comparison as this place has the potential to pull customers away from established places that don't have full liquor and 4am. If you give it to this guy them everyone else who doesn't have it is gonna ask "why not me?". The domino effect then plays out. We don't need another place with Full Liquor open to 4am on Avenue A, especially one with a following that is very likely to attract crowds of tourists and celebrities.