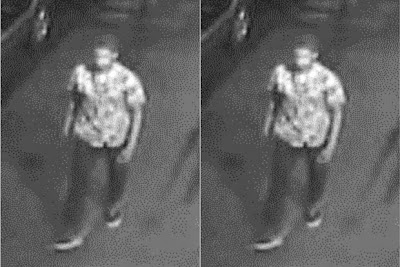 [Photos of suspect via the NYPD]

Ruan Wen Hui has died from the injuries he suffered Friday night during a brutal attack on East Sixth Street, according to published reports.

Hui, 68, had just dropped off his granddaughters at home on Friday evening when the attack occurred near 745 E. Sixth St. A disturbing surveillance video shows a suspect, who the NYPD described as a black male in his 20s, approaching Hui from behind. The video shows the suspect yelling at Hui before throwing him against a wall and punching and kicking him in the head. 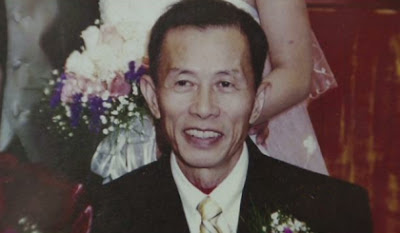 His youngest daughter spoke to CBS 2.

"I couldn't believe that this happened to my father because my father is a very good man. He always helps people and he always smiles. Everybody thinks that he’s the best person in this world," she said.

It is unclear what prompted the attack.

Previously on EV Grieve:
[UPDATED] Reward for info on East 6th Street assault; plus video of the attack
Posted by Grieve at 10:36 AM

This is just horrific. That poor man... his poor family. I cannot imagine losing my father in that way. How can no one know who this thug is?? He looks like a local -- someone must know something!

The cops think they know who this guy is, think he lives nearby but is apparently now in hiding. The reward is up to $10,000. They should give this to the victim's family as soon as the thug is caught, which will probably be by later today or maybe tomorrow, unless he's already taken off for someplace like Florida or the Dominican Republic. The cops are closing in. He's better off turning himself in before someone else finds him first.

This is a tragedy. Condolences to the family of Ruan Wen Hui.

Sending love to the family.
This is just awful.

Giovanni, I hope you're right. This happened in front of my building. I remember seeing the victim several times on the block. I for one wish that I could have jumped outside a few minutes sooner and done something. We can't like this kind of thing go down in our neighborhood.

That man could have been my father, so the cops better get the murderer.

This is horrific. I didn't know Mr. Hui, but I'm so distraught by this. He looks like he was a very kind man. My deepest condolences to the Hui family. I'm so sorry.

How is it that the police can realy do anything? After all they bring charges against those who are attacked in this neighborhood and defend ourselves. It no wonder that someone can lose their life in the environment created by those in the 9th!

After watching the video, it looks as though this ’20 something’ year old was probably dared by his friends to go out and knock some one out, so he finds a soft target like an elderly Chinese man of 68 years (one foot shorter than him) to beat on. I also wonder if one of his friends are in the video afterward looking to see how well he did. Check the video at 1:30 minute. Looks like his friend walks over after the beating and sees the damage dealt, but does nothing to help the father on the street. Hopefully if a group conspired, they will all face charges.

There is a deadly predetor on the loose and please anyone that know something please come forward. My deepest sympathy to the family of the victim.

@Anonymous 1:47
Wow that's the first time I heard someone blame the police for a crime victims murder. This was not a fight but a slaughter by a young thug without any empathy or human decency. You are not helping and any axe you have to grind against the police does not belong here.

if susan s.......... did not have a personal vendetta against all the bars and restaurants in this neighborhood then maybe we could have more patrol cars rather than wasting the ninth precinct time and resources with trivial bullshit matters

Assuming they catch this mutt, and I am guessing they will, the NYPD is pretty sharp, well the trial costs for a case like this run about $200,000 to the taxpayer. Assuming a guilty verdict, incarceration costs in New York State are about $70,000 per year. This looks to be a healthy young specimen, and will be maintained in that condition by medical, dental, and optical care, all at your expense. So let's figure he lasts till 75, that's about 5o years, so you are paying his room and board to the tune of $3,500,000 plus the trial cost, so that's $3,700,000. Not to mention the the lawsuits he will file, etc, etc.
All for what? Won't do that nice fellow that he beat to death one bit of good, other than maybe torment his family to know this guy is sitting tight and warm catching all the upstate roundeye he can use.
Well I can thinks of lots of better things to do with 4 million dollars. Can you?

Will the DA have the stones to classify this as a hate crime? For far too long the Asian community has been targeted for robberies and assaults by blacks and Hispanics how many food delivery guys have to be brutally
assaulted? When will the good folks demand change? And where is rev al?

Yesterday, the police were driving up and down Avenue C broadcasting the crime from loudspeakers and asking any witnesses to come forward and remain anonymous. So if you know anything, please do. Elder abuse in any form is unspeakably cowardly and despicable. I truly hope they catch the person(s) and to those who passed on by; I hope if you are obviously badly hurt and lying on the street that someone stops to help you or at least calls 911. I've done this whenever I see someone in distress and, believe me, I've been verbally abused more than once by an awakened inebriate. But that won't stop me from trying to help the next time. My heartfelt condolences to the families of the victim and of the sociopathic thug(s.)

My sincere condolences to the family of Mr. Hui in their time of grief.

This was truly a senseless crime, and I deeply hope the guilty person(s) are brought to justice.

A reminder to all those who like to wax nostalgic about the "good old days" in the EV: there was a shitload of violence just like this. You might loathe yuppies, but they don't kill grandpas for fun.

My sincere condolences to the family; such a senseless act. Moe, I am with you on this one.

My heart goes out to the family of Mr Hui. I too remember when first ave and 9th st was an open air drug supermarket. I always wondered why that was the case so close to east 5th st? Who made it that and how was it allowed to happen?

Does anyone in the community know the victim's family? If they are low-income, perhaps a fundraiser similar to the one done for the slain florist could help a bit, at least with the immediate financial implications of this incomprehensible tragedy.

I felt very uneasy walking my dog around the block tonight, just 2 blocks from where this senseless violence unfolded. Thinking that that scum is still walking our streets makes me want to scream.

I haven rarely ever heard about such random, senseless attacks like this in the East Village. What is it in our culture that allows, or creates this kind of violence? I know this is a ridiculous question but I'm at a complete loss. Beyond sad and scared.

The East Village needs a cop to walk the beat on each Avenue from 3rd Avenue to Avenue D for seven beat cops that's right no more hiding in Ninth Precinct and in patrol cars. Get the FUCK out there and be a presence. Walk the beat 8pm to 4am. Then car patrol each street 5 to 8am.

Had there been a beat cop where this murder occured maybe this attack could've been thwarted and this attacker could've been stopped mortally or not, or maybe this attack wouldn't have happened at all as if you have a beat cop constantly patrolling the area people are less likely to commit street crimes. Name me the last time someone snatched a purse right in front of a cop oh wait...there's never a cop walking the beat to witness it.

The cops apparently know his name, according to a short piece in the WSJ Tuesday, p. A19. It says he has a criminal record and lists some of the crimes.

Just wanted to repeat this: "The East Village needs a cop to walk the beat on each Avenue from 3rd Avenue to Avenue D for seven beat cops that's right no more hiding in Ninth Precinct and in patrol cars. Get the FUCK out there and be a presence. Walk the beat 8pm to 4am. Then car patrol each street 5 to 8am."

Yup. Seems to me that the neighborhood is small enough that walking a beat is better policing than riding in a car. And if there's more crime in some areas, there should be more walking in that area.