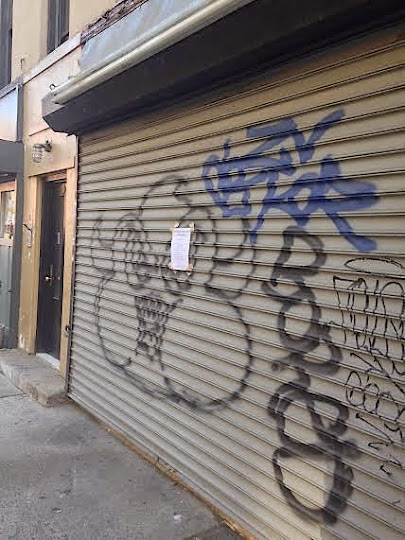 The Lan Cafe space apparently won't be sitting vacant for too long.

The Vietnamese vegan restaurant at 342 E. Sixth St. between First Avenue and Second Avenue closed for good after service on April 29. The family who ran the place these past nine years said that high rents were to blame for the closure.

According to materials on file (PDF!) at the CB3 website ahead of this month's SLA committee meeting, an omakase-style restaurant is in the works from one of the owners of Kura, the upscale sushi bar at 130 St. Mark's Place.

The configuration for the new space shows 9 tables seating 18 people, plus eight counter stools. The proposed hours are noon to midnight, Sunday-Thursday; until 2 a.m. on Friday-Saturday. The applicants are seeking a full liquor license. (Lan Cafe did not have a liquor license.)

The SLA committee meeting is May 18 at the CB3 office, 59 E. Fourth St. between Second Avenue and the Bowery.
Posted by Grieve at 4:30 AM

Ok so who's taking bets that they will not get a full liquor license? After all those loud, rowdy, drunken Japanese businessmen over running such places like 9th St. are such a nuisance! (Yes, the previous statement is sarcasm in case Sheldon Cooper is reading this blog.)