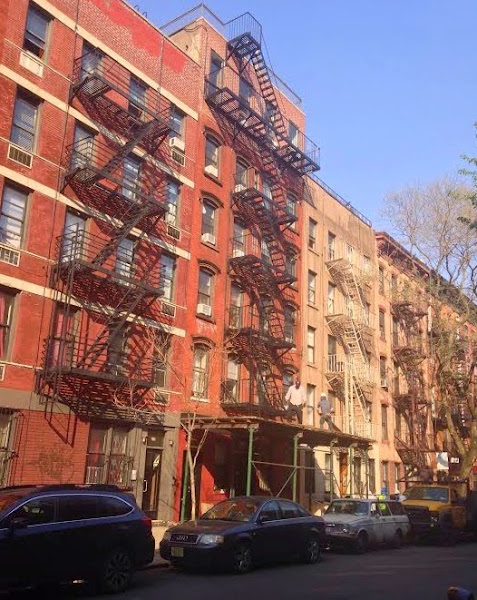 Workers arrived late yesterday afternoon to assemble a sidewalk bridge outside 515 E. Fifth St. between Avenue A and Avenue B, where, perhaps, the long-contested penthouse will finally be removed.

A quickie recap of our previous recaps: The Board of Standards and Appeals (BSA) had previously ruled in 2008 that landlord Ben Shaoul needed to remove the 6th and 7th floors. However, his attorneys had requested that the city grant a zoning variance to "permit the constructed enlargement, minus the penthouse, to remain" here.

Last September, the BSA gave Shaoul 60 days to complete demolition. Upon documentation of the removal, the BSA would then consider granting the assorted zoning variances to keep the 6th floor. The work permit to remove the penthouse was filed on Feb. 4 and approved on April 2, according to DOB documents.

According to the Tenants Association of 515 East Fifth Street, the hearing on the zoning and Multiple Dwelling Law variances is next Tuesday, May 12.

BSA tells Ben Shaoul to remove the illegal penthouse on East 5th Street within 60 days
Posted by Grieve at 4:35 AM

Last summer, When they put a bridge up over the 6th street version of this, they simply renovated the aprs adding new Sheetrock etc. the one on 6th street still exists

Last summer, When they put a bridge up over the 6th street version of this, they simply renovated the apts adding new Sheetrock etc. the illegal penthouse on 6th street still exists