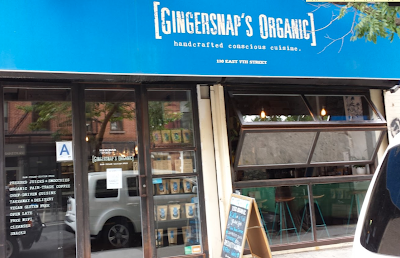 Here's more information about what's being proposed for the former Gingersnap's Organic space at 130 E. Seventh St. just west of Avenue A.

According to materials on file (PDF!) at the CB3 website ahead of this month's SLA committee meeting, the space will house Avant Garden (an homage to Courtney Barnett's "Avant Gardener"?), a restaurant serving vegan cuisine.

Avant Garden is seeking to serve vegan wine and beer to "accompany the seasonal cuisine selections carefully selected by our in house sommelier."

The proposed hours are 5 p.m. to midnight daily.

If approved, then this will be the latest East Village entry from Ravi DeRossi (the paperwork lists him as Ravi Lalchandani), who owns Death & Co., Cienfuegos and Proletariat, among several other bars/restaurants.

Here are the sample menus included with the CB3 materials… 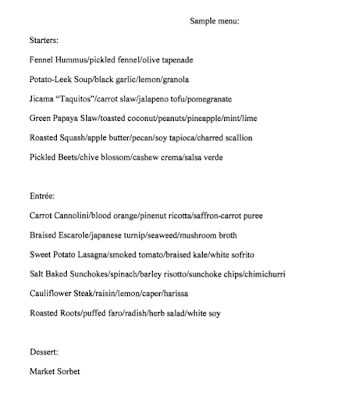 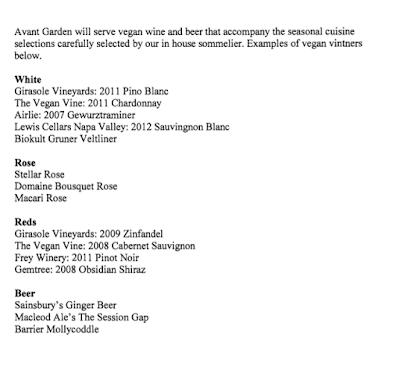 CB3 watchers are curious about this application. Back in October 2012, "DeRossi and his surrogates got a civic lashing ... for converting the shuttered Jane's Sweet Buns pastry shop into the beer bar Proletariat without providing a 30-day notice to the board," according to Grub Street.

In the fall of 2011, CB3 OK'd a wine-beer license for Jane's Sweet Buns on St. Mark's Place. At the time, DeRossi assured the skeptics about the concept of a bakery serving alcohol. All just to pair wine with the buns and desserts.

"It was never intended to be a bar," he said of Jane's, according to coverage in The Local. "It's completely innocuous and an asset to the community."

Gingersnap's left this space back in January for a new West Village location.

The SLA committee meeting is May 18 at the CB3 office (BYOB), 59 E. Fourth St. between Second Avenue and the Bowery.
Posted by Grieve at 4:50 AM

Lots of upsides to this.

- They didn't use the word "curated."

- The wines are "carefully selected." No one wants a wine that's selected carelessly.

- The wines are vegan. Did you know that most wines are processed with chicken gizzards? It's not true, but it's gross, and we don't want that.

- The applicant is a fine, upstanding member of the community with a proven track record or, at least, better than your average landlord/murderer.

- And, finally, desert: Market sorbet. They charge you as much as they can.

It all looks good.

It's more important than you think; isinglass (fish scales) is often used as a clarifying agent for conventional wines.

There's a whole culture of vegan tippling now, including Barnivore, a list of vegan-friendly booze. Many people who go to the Pine Box Rock Shop in Bushwick don't realize it's vegan, and don't care.

our food and drink has gotten so precious.

the midnight closing is positive.

you cam get as drunk and obnoxious on organic wine as you can on any liquor.

Chicken Gizzards would be a funnny band name.

They get props for the Courtney Barnett homage.

Hooray!Cannot wait for this to open!

The charlatans behind Jane's Sweet Buns, who ousted De La Vega and turned the place a straight up bar after only a few months, should never be allowed to open anything again, regardless of whatever kind of meatless trash they are serving.

Excellent news. I just hope the prices will be reasonable.

Never understood how Janes/Proletariat was granted license by SLA for alcohol? What happened to 200 foot rule and 500 foot rule? I understand that CB3 might not care but surely SLA was not hoodwinked as well?

It was back when David McWater was on SLA.

McWater? That is true it depends on who you know. Taberna lied on its beer/wine license and got approval from SLA and CB3. There was no C of O for back/side yard use (in fact had violation from City) and the location is within 200 feet of two schools. All depends on who you know and if you are 1%. http://www.nyc.gov/html/mancb3/downloads/sla/2015/01/questionnaires/04-%2097%20St%20Marks%20Place_Questionnaire.pdf