The Black Rose is now open on Avenue A 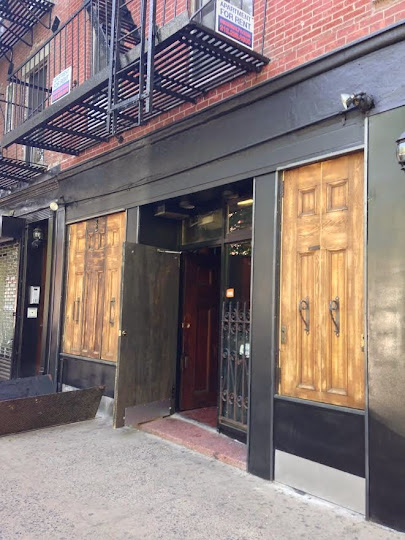 Several media outlets had previews yesterday, including Urban Daddy, which called Black Rose "an admirable mixture of a gritty Ave A bar of yore and a legit cocktail spot."

Bedford + Bowery had more details on the decor, noting that owners Joseph Daniele and Robert Payne redecorated the space with reclaimed objects, including recycled wood, metal and elements salvaged from film sets.

The photo gallery at Urban Daddy shows the bars rock roots, with framed photos of Jim Morrison and Jimi Hendrix, among other musicians/bands.

According to B + B, there will also be an occasional live act. "Musicians will stop by a couple times a month to play acoustic sets on nights with themes like disco, burlesque and LGBT."

The rock theme carries over to the cocktail menu, which includes drinks called "Light My Fire," Purple Haze" and "Personal Jesus." 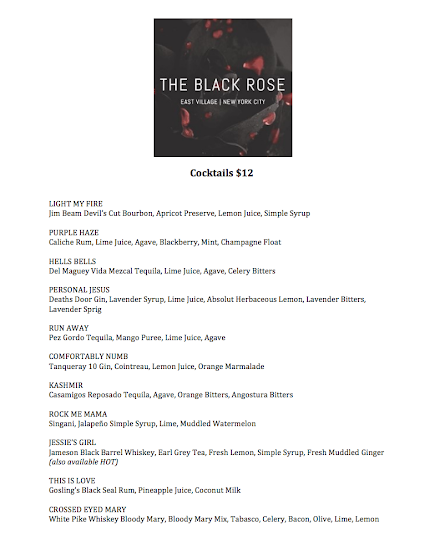 The previous tenant here, The Odessa Cafe & Bar, closed Aug. 31, 2013. Several suitors made a run for the space, but nothing ever materialized until The Black Rose came along.

The Black Rose, 'a neighborhood rock and roll bar,' opening in the former Odessa Cafe and Bar space (71 comments)
Posted by Grieve at 4:28 AM

Email ThisBlogThis!Share to TwitterShare to FacebookShare to Pinterest
Labels: 117 Avenue A, The Black Rose

I'll keep an open mind check them out. I'm not a $12 cocktail person. Do you know if they have any reasonably priced draft beers on tap?

Looks like you can do your makeup at the bar - What happened to men in the east village? Morrison and Hendrix are rolling in their graves.

I peeked they had the doors and windows open the other day.

As far as the 'rock and roll' decor…

At 8:11 AM, Anonymous said...
Looks like you can do your makeup at the bar - What happened to men in the east village? Morrison and Hendrix are rolling in their graves.

When Morrison and Hendrix were alive, it wasn't the East Village; it was the Lower East Side.

"The East Village is, face it, New Yorkers, the Lower East Side.

I breathed my first breath in the lower east side and every breath since then - No reference made to the east village and those rockers, just to this bar and those rockers - KEEP NYC ALIVE !!!

I think you are missing this bloggers point Scuba Diva, this bar doesn't live up to a rock'n roll bar

Nothing cooler than the Hard Rock Cafe. I hope the have real cool memorabilia from all those great rock n rollers. I love Jim Morrison posters.

I was looking forward to checking them out but they can fuck off with the $12 drinks. What neighborhood do they think they're in?!

Totally corny shit. I wish them luck, but this silly motif more "twee" than it is "rock'n'roll". Postmodernism is getting to be such a drag.

The most I'd pay for a drink in a place like this is $8 and that's being generous. On the plus side neighbors won't have to worry about bros getting hammered in here. It's priced to sit empty.

music is music. People are people. I dont get why it needs to be categorized as a "lbgt them" night - straight people need not enjoy? I am all for applauding music artist but highlighting the sexual orientation of the creator is thick.

Burning Down The House flaming aperitif?

This place looks awesome! It's like the next CBGB. I can see Madonna singing in there right now...

Hope that the Ramones, NY Dolls and Television (among others) are represented

Folks, this is what it takes to open a bar in NYC today. You need a concept, a hook and someone doing public relations work on your behalf (also a bartender from some name place, like 11 Madison Park). Eater and Gothamist also have previews of The Black Rose today. Nothing wrong with this. It's the reality of the bar business.

The days of opening a cool little neighborhood bar are long gone. The last place to so was the Coal Yard. There are still great bars around, so enjoy them, and don't dump on a place for making an effort not pandering to the Murray Hill crowd.

So... no drinks named after songs by Heart, Janis Joplin, The Pretenders, Fleetwood Mac, Jefferson Starship, The Runaways or any other bands with women yet they call out a LGBT night? Mixed messages much?

This is pandering to what they think "rock" fans are. A bunch of tired cliches for baby boomers who are taking clients out on their firms expense accounts. Depressing.

1:52, no drinks named after Bad Brains or Thin Lizzy (I guess Jimi covers their attempt to be POC-inclusive, but if "This Is Love" is supposed to be a Marley hat-tip they may want to do some fact-checking ...)

and on the LGBT end, no Pixies, no Buzzcocks, no Jayne County ... this place is about as rock 'n' roll as a barn dance. Or John Varvatos's closet (lol Anon 1:17). Rick Springfield!! *devil fingers*

I wish I was a 1%er so I could afford to drink there.

How much are you supposed to tip the bathroom attendants in places like this? I never know.

Jim would have spit in drinks like that. Believe me, I know. We drank at some East Village bars back in the day, but none were as poncy as this place.

Is it true all the bartenders are named Jeeves?

Do they have a poor door too?

Anon 3:06PM: I think that's a bit dramatic. If you really wanted to check this place out, you don't need to be a "1%er" to do so...rather you could treat yourself one night to a drink. I'm certainly not a rich person but every once in a while I get a good bourbon or whiskey when I'm out. Yeah, it's expensive but I've enjoyed myself...so it's all good.

I had high hopes for a bar whose name is a Thin Lizzy reference, but those Urban Daddy pics look douchetastic. Nothing says "I like to rock out" like cocktails garnished with watermelon spears and served in mason jars...

If rather go to Josie's or Monas or Coalyard where drinks are reasonably priced. All I can picture is that tool from the Smirnoff commercial jizzing himself over grinding cardamom and curating herbs.

Went there after work for a few drinks. It's definitely a comfortable place. It's spacious and have good seating.
So far they don't have a happy hour or any specials. They didn't have the cocktail menu out since the bartenders are still training?
The prices were ok but you can get better bangs for you buck elsewhere.
The crowd last eve, was light. A mix of curious locals and twerps who love to make sure ever knows they live 15secs away from the bar (won't be surprised if they shop at John Varvatos). They had their spotify tuned to whatever innocuous music that passes for indie nowadays.
Despite all the rock posters their interior decorator probably bought off amazon, this bar doesn't have a rock vibe. Maybe in time it'll get an edge but right now it's safe.

What neighborhood do they think they are in? Welcome to the East Village of 2015. People complaining about $12 drinks, cocktails at most bars around here have already hit $14-15. You people must not go out much.

Actually, I was at the SoHo House yesterday and the drinks are $15. This bar is overpriced.

@9:18 PM Great argument! Everyone else over charges so should we!

Places I won't waste money at.

It's reality. You want your PBR and a shot, go to your shitty dive bars.

Sorry, $12 for a cocktail is actually pretty normal. Can you find cheaper places? Sure. There are quite a few dive bars around, although there may be a shortage of them coming up because people tend to bitch and moan whenever anyone tries to open one. I would also note that the cost of a cocktail or mixed drink at a dive bar will probably only be about two dollars cheaper, at most. Sorry, the situation just isn't that bad. Nobody is putting a gun to your head and making you go there and part with the extra two dollars. If you are in such dire straits as to be so outraged about a two dollar price difference, maybe you shouldn't be spending money at bars?

What neighborhood do they think they are in? This comment is made often. Well they are in the EV of 2015 where 12-15 drinks are the norm. This is reality. In fact its changed so much that douches will comment that you are the problem. Its over Johnny. Old school neighborhood bars are 'shitty dives'. This bar - like the neighborhood itself- will never develop a 'rock vibe' or 'an edge'. Those things develop organically- you dont get them from an interior designer or a social media consultant. Public relations? SMH. Im so glad. Im old enough to remember the real pre Giuliani NYC/EV. This bar is for finance bros and.douchebags. Epic fail.

Ah yes, the pre-Giuliani East Village of cheap rents, burning buildings and people stealing your laundry from the dryers. Your food choices were limited to diners, Benny's, Sidewalk and Eastern European food. Such nostalgia, gone forever -- maybe you can move to deepest Brooklyn/Queens. Good luck finding it.