Edwin and Neal's Fish Bar is now in service at 345 E. Sixth St. just west of First Avenue. As we first reported, the restaurant is a larger extension of Shane Covey's Upstate, which is still in business around the corner at 95 First Ave. He described Edwin and Neal's as a neighborhood fish place. 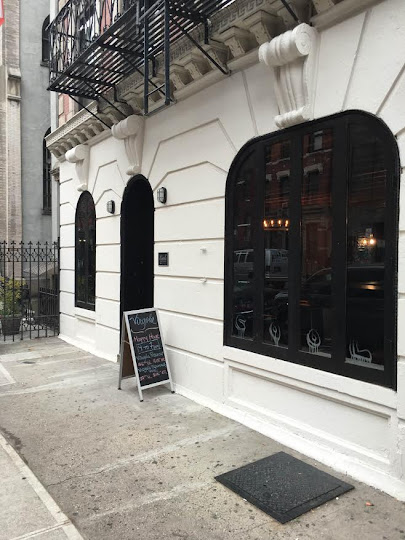 On East Seventh Street, an outpost of the Greenwich Avenue-based Virgola, an oyster and wine bar, has opened at 111 E. Seventh St. between Avenue A and First Avenue ...

Oysters coming to the former Bourgeois Pig space on East 7th Street
Posted by Grieve at 4:20 AM

Something fishy is going on...

I wonder if they will be using the Bass-o-matic 3000 to blend their drinks?

What about the real Fish Bar on East 5 Street, between 2nd and 3rd Avenue? How can two bars have the same name?

Had dinner there the other night... Fantastic.

Pretty ignorant of them to use the same name of a longstanding neighboring business. Real fucking easy not to do that. Weird of them.

I don't "Edwin and Neal's" anywhere on that sign. Just sayin'