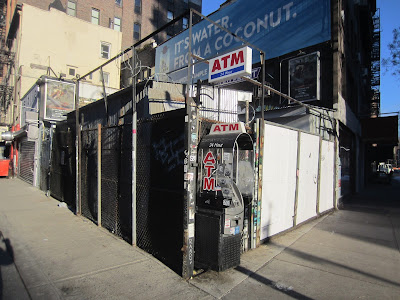 You may have noticed in recent weeks that workers have built several kiosks/stalls inside the corner lot at 348 Bowery at Great Jones... 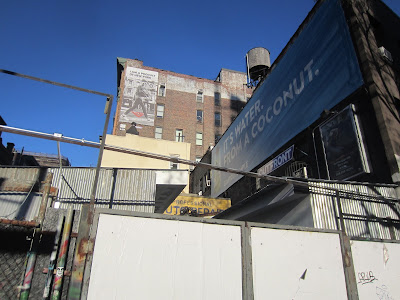 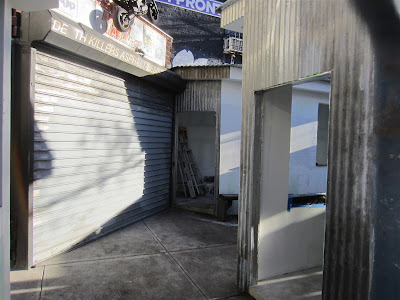 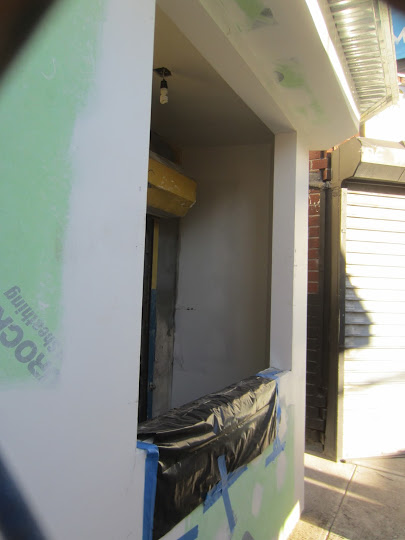 A tipster tells us that this will soon be home to a new marketplace showcasing several quick-serve food vendors.

On Friday, BoweryBoogie wrote about Essex Street's Cabalito Pupuseria raising funds to open a food stand in an undisclosed location. Per the crowdfunding campaign: "Cabalito will make its humble traditional mark in a new food collaboration project in NoHo. This project will house six up-and-coming passionate restaurateurs of different specialties."

There are a few clues about 348 Bowery's future via the DOB website (cutting and pasting their all-cap style):

INSTALL TEMPORARY STRUCTURES - FOUR(4)EXTERIOR KIOSKS AND TWO(2)INTERIOR. THE MARKET WILL BE USED FOR PREPERATION AND COOKING OF FOOD & SALE OF DRY GOODS.

A previous DOB permit had the following:

The address has been without a full-time tenant since Downtown Auto & Tire left in April 2012. The Deth Killers of Bushwick opened a pop-up shop here in February 2014, selling their brand of jeans and motorcycle stuff for several months.

There have been other proposed concepts for the space, which has been on and off the market for several years. In July 2010, a group aspired to open the first New York branch of Segafredo Zanetti Espresso Café, the Italian-style coffee bar, on this spot. They went before CB2, who rejected the proposal, which included a patio with a retractable roof with soundproofing as well as sound-resistant sliding doors.

"a retractable roof with soundproofing as well as sound-resistant sliding doors" It's crazy how loud every restaurant has become, club loud in fact.