The rent is due at DF Mavens 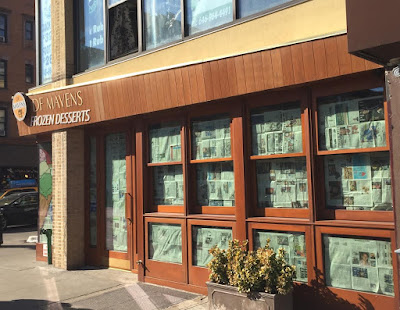 As we first reported, DF Mavens, the vegan ice cream shop and cafe on the northwest corner of Second Avenue and St. Mark's Place, closed for good late last month.

Yesterday, the landlord attached a rent-due notice on the door... And it appears the lease goes back to August 2013.

The coming soon signage arrived in October 2013 ... but the storefront wasn't ready for business until Dec. 26, 2014, DFM's opening day. (And is the day after Christmas the best day to open a business?)

Several readers have been curious why the build-out took so long, especially since the space was previously home to another cafe, Eastside Bakery (.net?). So it wasn't as if workers had to renovate a gutted space or some far-flung business...
Posted by Grieve at 4:13 AM

Have you seen oil prices lately, Mr. Landlord? How can you expect FAL Foods USA, a subsidiary of Fal Holdings Saudi Arabia, to pay its rent?

I noticed that businesses which depend solely upon selling dairy based frozen treats continue to close after months of operation why would a vegan version which will attract an even smaller alice of frozen snack fans fare any better.

Even by typical FroYo standards, this whole fiasco was very flaky They spent over a year and a small fortune building the space, and opened the day after Christmas in one of the coldest winters right before a blizzard and a few big snowstorms. In the end they couldn't even properly announce they were closing, all the while knowing they were not even paying the rent. Like so many of these new chain concepts, they spent more time building the hype and curating the buzzwords and less time on the business fundamentals, picking an overpriced retail space that could not support their business. What's amazing is that everyone else seemed to know this would end badly, everyone except them.

There's too much money behind businesses today and too much arrogance and in your face smarts that when they get into trouble they just fold their tent and move on as if it didn't happen.

i actually think this would have succeeded had it been in a smaller space on a side street.

Are "business people" REALLY this stupid? Sinking tons of money & hype into a fro-yo store that has barely got a chance to make the rent? Or is motivation behind these nearly-guaranteed-to-fail shops something else entirely?

It seems unbelievable that there are this many "business people" who somehow raise enough money to OPEN a business but then don't have any idea how to make the place work. You don't need to be Einstein to know that places like this have very little chance of succeeding. Color me bewildered.

If they really wanted to create buzz and get more people introduced to their brand they should have gone with a food. truck and gone to neighborhoods with stores that sell their products. But that would have been the smart thing to do.

Were they open less than a year?

If they really wanted to create buzz and get more people introduced to their brand they should have gone with a food. truck and gone to neighborhoods with stores that sell their products. But that would have been the smart thing to do.

It's incredibly difficult to get a [legal] food truck license; Cinnamon Snail—the wildly popular vegan lunch truck based in New Jersey—operated out of Bergen county and thereabouts and built a following. They managed to buy a license to operate a food truck in NYC, and did very well on the streets here, before they discovered…their license was a fake and they were forced to go back to Jersey. [It was a forgery created by the shifty person who sold it to them; it wasn't possible to obtain a license legally.]

In NYC, food trucks are incredibly popular and cool, but because there's currently a cap on the number of licenses, it's not something everyone can aspire to.

I really like their ice cream and was bummed when this shop closed. BUT you can get it at Westside Market, cheaper than the DFs store oddly enough.

@Scuba Diva Well that's sad news if it's that hard to even get a food truck license, but at least if they had tried that route instead of opening an expensive retail store they could have saved themselves hundreds of thousands of dollars in lost investment. They could also do street fairs and local food fair events to sell and sample products, which is a much better way to invest in brand promotion than a store.Lets just hope this experience doesn't hurt their future since it sounds like they do have a good quality product.

If the businesses plan a minimum of two years of working capital/expenses I order to try and create their following that's one thing. But it seems like something else is going on... Just too many of these places popping up and disappearing every six months.

@6:56am: Yes something else is going on, but what? Stupidity/incompetence? Money laundering? Other?

These places are closing faster than ever because they all assume that high rent means the location generates lots of walking traffic and customers. What they don't understand is how few of the people walking by have the kind of disposable income required to pay the inflated prices they are forced to charge due to the high rent. After they open they quickly realize that the business isn't materializing, so they panic and close shop. Every storefront in NYC should come with a warning label, with full disclosure including how many businesses went bust in that location, and how much money was lost there.

I liked that the counter guy called me "love" repeatedly when I got a frozen treat there recently.