The Citibank branch on Avenue A is closing 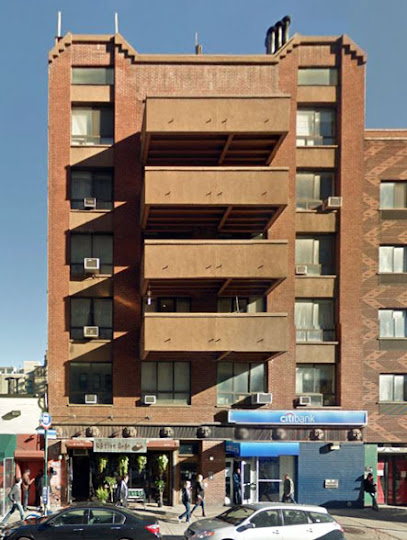 The Citibank branch at 50 Avenue A between Third Street and Fourth Street is closing in January. 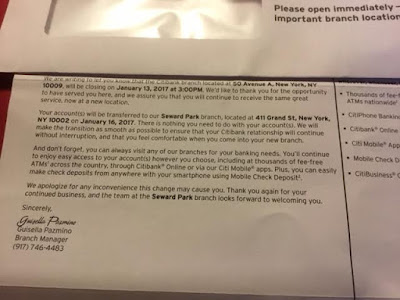 The letter, which does not offer a reason for the closure, states the last day on Avenue A will be Jan. 13. This customer's account will be transferred to the branch on Grand Street in Seward Park, which is not really convenient. (Why not the Stuy Town branch on First Avenue at least?)

Another EVG reader recalls that No. 50 was previously home to an E.A.B. branch. Citibank bought E.A.B. in 2001, according to The New York Times.

In the 1990s, we loved E.A.B. and the people who worked there, especially the manager, John Ottino. Then at some point, Citibank bought out E.A.B., which upset us because everything became so corporate, but at least John and several other wonderful people who had worked for E.A.B. stayed on at the branch for a while, and at least we’ve been able to keep our original E.A.B. account numbers all these years. Because of constant employee turnover, this Citibank branch hasn’t provided a personal touch for many years, but it certainly has been convenient to bank there.

The Chase branch at 20 Avenue A closed last November. That space remains vacant.
Posted by Grieve at 4:22 AM

Was John the guy with the long ponytail? I never dealt with him directly but he had a great energy about him.

I never noticed what a hideous monstrosity that building is.

the folks who work at this citibank branch couldn't be nicer or more helpful to their customers. we will miss them terribly.

Yeah, I like this branch, and it really seems like Citibank has been closing a lot of branches in the past few years, its annoying.

Say what you will about banks but we still sometimes need them and it is great when they are less then a 10 minute walk away. The de-banking of Ave A continues leaving 1st avenue for now most people's only option. When I moved here 35 years ago there was just one bank at 4th street and Ave B. Okay I didn't have any money in those days but now we have returned are back to square one.

Would be ironic if Citi was being pushed out because of high rent increase.

This sucks. As a patron of Citibank, I often visit this location for ATM access. It certainly isn't as updated or modern as other locations, but it's functional and does its job. Since I live off of 7th and C, I am going to have to walk to Broadway and 8th for cash now. Too bad.

Maybe Beth Israel will be the new tenant, and save even more money.


John Ottino at Mediterranean of Bay Harbor.
Bay Harbor Islands · Florida
Wow what a wonderful memory working with the customers at that office and especially the great team; Karen LutzJoyce,Henry,Yvette Vigo,Guy, Heather Briggs, Helen, Lourdes, Kimberly, and Lisa. After I left the Avenue A branch I worked at the Citi of Hauppauge, Long Island, NY.
I just experienced this myself when Capital One closed several offices including mine. They did the right thing by us all and I am out on the job search and having fun doing it at the same time. The number of bank branches will shrink in some markets and grow in others. Its an adjustment so banks don't go the way of Blockbuster stores did to Netflix. Great to know we were appreciated in the East Village community!

I so remember when there were next to no banks in the neighborhood. It seemed kind of nice then perhaps because, like you, we had no money to speak of.

Dear god! John Ottino??
Didn't you also run the ship at that location when it was EAB?

Best wishes to you.

Ok. My problem is, sometimes I read comments before I read the entire article.
Still nice to see you, John.

@ 6:13 AM
Don't know how you could miss it. LOL.
Built in the prime of 1980s yuppifigentrification.
I remember actually taking a tour of one of the apartments when the building first opened.

Eh, its awkwardness and outdoor spaces offer some strain of charm..

I used this branch since it opened as an EAB. That was the best bank I ever have done business with and John Otino was the most attentive branch manager I have ever interacted with. He was extremely helpful when somebody forged my business checks and tried to pay off their very high credit card bills with the forged checks. Fortunately thru his efforts I lost no money (also I didn't have enough money in the account for the checks) but the check forgers were never caught. The transition to CitiBank wasn't as neat as one could have hoped for but overall it worked. After Mr. Otino left the branch the bank suffered years of high turnover until recently. The crew there now are very helpful and nice. It sad that after finally making some relationships at the bank, it's closing. But the branch is not as busy as it was years ago, lots of people are banking online now, so maybe CitiBank decided that it wasn't worth the expense. That Seward Park branch is very busy.

"I never noticed what a hideous monstrosity that building is."

Interestingly, if you look closely at the row of faces above the first floor, you will see they are lion heads sticking their tongues out at the viewers. The story making the rounds when this place was built was that the architect. stung by the criticism of how Brutalist it looked in comparison with surrounding buildings (especially from the people living across from it, who saw it out their windows every day), installed this design element, which is actually an early 20th century pattern, onto the building as a "screw you" to those who objected to his vision.

John Ottino you are an incredible fond memory! You helped me out so many times because you refused to be a corporate bot, thank you John and thank you for an EVGrieve posting your name!

John, you were also my very nice banker from the EAB days. So nice to see your name come up -- wishing u well!

Well you know times ain't they used to be so Citibank has had to tighten its belt and unfortunately close small neighborhood branches...BECAUSE THEY ONLY MADE 3.5 BILLION PROFIT LAST QUARTER.

FUCK SHITIBANK!! It is a funder of wars, launderer of drug cartel cash, as well as one of three majority owners of the "federal" reserve that creates economic spirals of inflation and implosion by manipulating the money supply, interest rates and deciding whether or not loans are made by member banks.

Shiti is only hurting itself with such customer-unfriendly policies. There are plenty of other places to do your banking nearby. Try the credit union, located just a block away from this branch, at East Third and Avenue B. Their depositors are your neighbors and loans are made to members of our community. Imagine THAT -- what banks used to do before they were allowed to become something else!!

Folks ought to DE-FUND Shitibank by way of mass-withdrawals. they deserve what they get!!

My pleasure always Robet .be in touch anytime