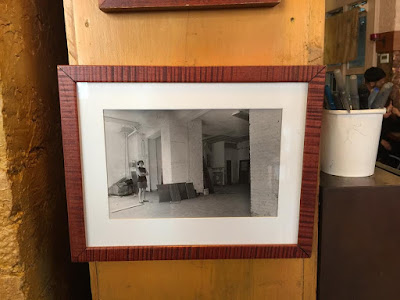 As you may know, Angelica Kitchen closes out 40-plus years in business tomorrow.

Owner Leslie McEachern said that "making the numbers work week in and week out is just not viable for us anymore."

Since the announcement broke on March 24, the restaurant at 300 E. 12th St. near Second Avenue has been full of well-wishers turning out for a last of Angelica's vegetarian cuisine.

In addition to real estate woes — and the refusal to take any kind of plastic as payment — Angelica Kitchen’s problem may have been the food. It tended to be heavy and gluey and bland, true to the cuisine it came from. Yet that sort of vegetarian cooking can still excite reverence and nostalgia. I, for one, will be sad to see this vestige of the old East Village vanish.

And at The New Yorker, Jay Sacher, a former Angelica's employee, pens an essay under the headline "The East Village Loses Another Place for the Young, Hungry, and Weird." He writes about delivering food to Joey Ramone and recalls other celebrity encounters at the restaurant.

But, really, it’s the non-famous folks I remember most: Spencer, always walking into work with a purple plastic Kim’s Video bag in one hand, stuffed full of records—a man of obscure and eclectic musical tastes who was prone to saying things like, “The only good Beatles song is ‘Norwegian Wood.’"

The East Village has been a walking graveyard for years now, sputtering along as a cover-band version of itself. For me, the loss of Angelica marks its true and complete ending. I know, of course, that such things are relative, and other New Yorks will exist for other younger waves of the young, hungry, and weird, but it does nothing to soften my lament for the passing of this one.

This weekend, the restaurant is hosting a memorabilia sale... selling off "chopsticks to food processors to sculpture." 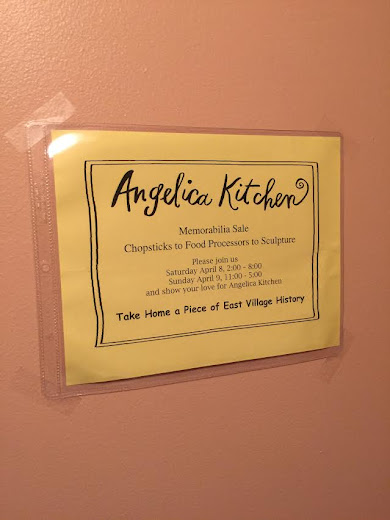 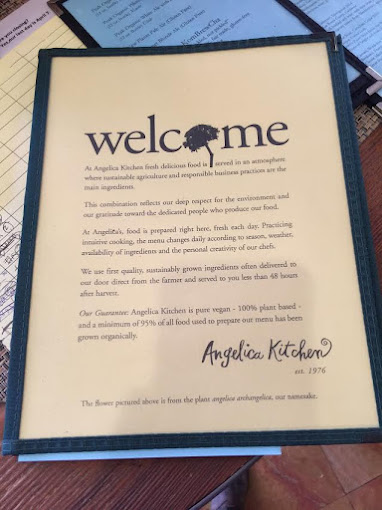 Meanwhile, a group calling themselves Friends of Angelica Kitchen have launched a crowdfunding campaign to help pay off remaining expenses.

Out and About in the East Village with Leslie McEachern
Posted by Grieve at 4:30 AM

"The East Village has been a walking graveyard for years now, sputtering along as a cover-band version of itself. "

So we are basically the modern-day Rolling Stones, he is saying. Sad!

Have only been there once, agree with Sietsema's "heavy and gluey" description, but nonetheless sad to see it go. Once again, the EV gets a little less cool and original.

Perhaps it could become a catering service.

Always preferred Souen where I ate at least 20 times a year and some years double that. Just once at Angelika was enough for me but will ever mourn the loss of Souen.

Anonymous, there is still Souen, one on E. 6th St., one in Soho. I think they're successors to the original. souen.net