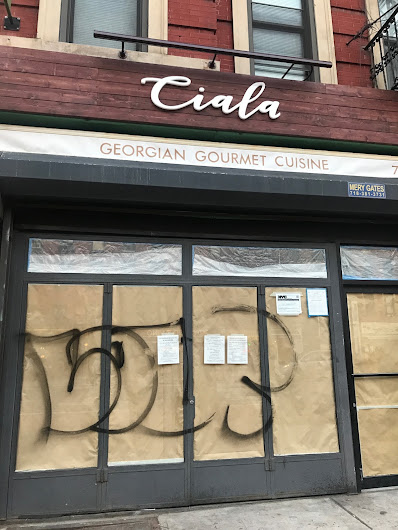 The new restaurant called Ciala has announced its arrival at 77 Second Ave. between Fourth Street and Fifth Street.

As you can see, Ciala will serve "Georgian Gourmet Cuisine." No sign just yet of a restaurant website or any social media presence.

The previous tenant here, Ballaro, which served Italian coffee and pastries during the day, and beer, wine and small plates in the evening hours, closed after seven years in February 2016.
Posted by Grieve at 4:01 AM

I think we need some clarification as to which Georgia the awning is referencing. I need to know if my gourmet cuisine is coming from Savannah or Tbilisi...

Thank you James! You beat me to the question!

I'm guessing Ciala is trying to give Oda House a run for their money...