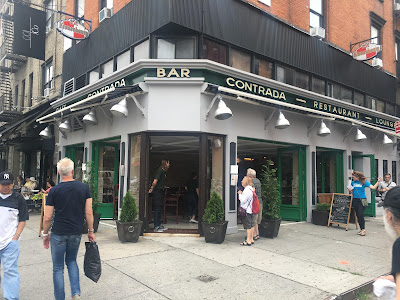 Jeff Lutonsky and Meghan Love, the husband-and-wife team who own Mable's Smokehouse in Williamsburg, are vying to open a restaurant at 67 Second Ave.

The two have applied for a new liquor license for the space, which has a working name of Mable's Hacienda and Tex Mex, according to the public documents (PDF) posted on the CB3 website ahead of this week's SLA committee meeting.

The address is currently home to La Contrada, which hasn't seemed to catch on since opening last July. The CB3 questionnaire describe this as a sale of assets. This southwest corner of Second Avenue and Fourth Street was also formerly home to Contrada, Calliope and Belcourt.

Mable's opened in 2011. Here's Eater on the restaurant's first anniversary:

Mable's is the massive, totally unpretentious barbecue joint next to the Brooklyn Brewery in Williamsburg. The restaurant serves a number of house-smoked meats and down-home sides at a very reasonable price — you can get a huge plate of Oklahoma City-style barbecue with all the fixins for about $15.

If all this goes through for Mable's, then perhaps they'll be some BBQ wars on Second Avenue — Mighty Quinn's Barbecue is just two blocks to the north.

The April SLA committee meeting is Thursday at 6:30 p.m. Location: The Thelma Burdick Community Room, 10 Stanton St. at the Bowery.