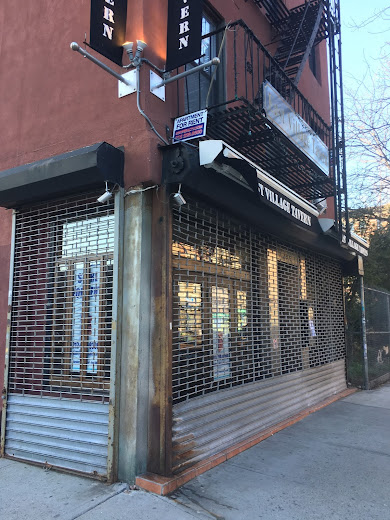 The operators of a restaurant called the Irish Times Pub and Eatery NYC have designs on the former East Village Tavern space on 10th Street and Avenue C.

According to materials posted to the CB3 website (PDF here) ahead of this week's SLA committee meeting, the proposed hours are 7 a.m. to 4 a.m. daily, with a 10 a.m. opening on Sunday. (The questionnaire doesn't specify when the place would serve alcohol — presumably 8 a.m. when it is officially legal.) 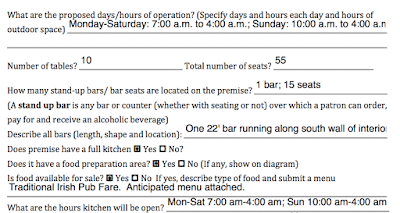 The configuration shows 10 tables with 55 seats and a bar with 15 seats. (And six TV sets.)

Since 2008, the owners have operated Irish Times Pub and Eatery in South Miami.

Here's a write-up of that establishment via the Miami New Times:

For decades, University of Miami students have been trying to dupe the bouncers at this Celtic-themed tavern within walking distance of campus. Yet no matter how closely they resemble their older cousin's expired driver's license photo, the bouncer, propped on his stool outside the double doors, inevitably refuses to let them in. Poor underage drinkers. They're missing out on a beacon for Dade's partygoers looking to keep the night from ending at a 5 a.m. liquor license establishment. But it's not just the postmidnight crowd that has kept the Irish Times clicking on a busy South Miami corner. A hearty menu with everything from sliders to mac 'n' cheese and more traditional fare like bangers 'n' mash, fish 'n' chips and shepherd's pie ensures an all-hours crowd. The double doors in front are left open rain or shine, and the friendly staff is welcoming whether you order a pint of Guinness before noon or are stopping by on your commute home for a game of pool.


East Village Tavern opened in 2008 and closed this past November. In announcing the closure on Facebook, bar staff blamed a disagreement with landlord Steve Croman. However, a Croman rep told The Real Deal that the bar had "been unable to consistently pay its rent in the last 12 months."

The April SLA committee meeting is tomorrow (Thursday) at 6:30 p.m. Location: The Thelma Burdick Community Room, 10 Stanton St. at the Bowery.
Posted by Grieve at 4:30 AM

Fits right in with the campus scene here.

Just be happy that they will ID the hell out of people. That's a start.

This block has been relatively peaceful lately. God help us.

Folks should oppose this at CB 3 I bet they won't look kindly on this method of operation or that it is a Crowman building. Anyone doing business with this criminal should not get a liquor license for sure.

A bar open 21 hours days, ye-ahhh. Good luck with that.

The Old place was truly right out of O'Neil's play The Ice Man Cometh truly the Last Chance Saloon poorly managed, poorly stocked and taking a extreme advantage of the term shabby chic too the limit. It held on by the sheer will of two neighborhood alcoholics both passing in months of each other. Once they departed the genie left the vodka bottle, the Budweiser keg was empty as the Sheriff showed up with a shiny new lock.There were good fellows there and they found new watering holes now holding a pint and speaking fondly of days and nights at The Tavern...