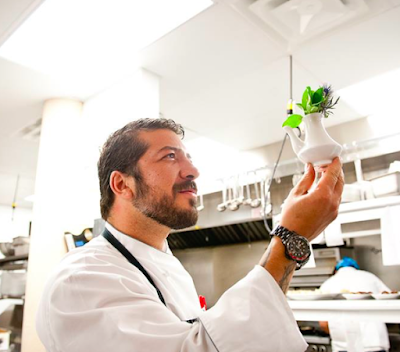 Guilherme Barreto, a chef and consultant who worked in several East Village and Lower East Side kitchens, was killed in a motorcycle accident Friday in Delray Beach, Fla. He was 37.

Barreto, a native of Goiania Goias, Brazil, worked for a variety of restaurants, including Pardon My French on Avenue B.

“It doesn’t matter whether it’s a tapas hole-in-the-wall joint or a three-star Michelin restaurant, I just cook my heart out,” he told The Wall Street Journal in a 2015 feature on the opening of Pardon My French.

He also appeared on The Food Network's "Cutthroat Kitchen."

A friend has set up a crowdfunding campaign for Barreto's two daughters, Aivie and Barbara. You can find that information here. There's a service Thursday morning in Boca Raton, Fla.

His family left a message on his Facebook page. It reads, in part:

It is with great sorrow that we announce the passing of our beloved brother, father, uncle, and everyone's best friend.

Thank you Guilherme for all of the knowledge, wisdom, memories, and love that you shared with us throughout the years. You shared so many and wonderful experiences with us that we will never forget our time with you. A simple laugh or joke always made the day better. Your kind and crazy charisma made you the special person that you were.

He was good man and a rest chef.

This is so tragic. Avenue B will feel a little empty without you lain across your bike on a smoke break, brightening passer by's with a funny quip, touching word, or just a smile and nod of hello.

37 is too young. Life is short and often unfair. Condolences to his loved ones.

This is so sad. Rip.

I knew young Guilherme from back in Miami Beach some 20 years ago. I have felt proud to see where he took himself in life. He always had great energy. I can still hear his voice and see his smile…
My prayers are with his family. It is hard to loose a father. I will always remember you, Cavalho.

Seven Months passed after his last breath, but his memories will always be with us. I miss my youngest brother with all my heart. He lived his life to the fullest. my children miss him dearly.

He was a truly kind man that I had the pleasure to know and work with. He will be greatly missed!