Another look at lower 2nd Avenue 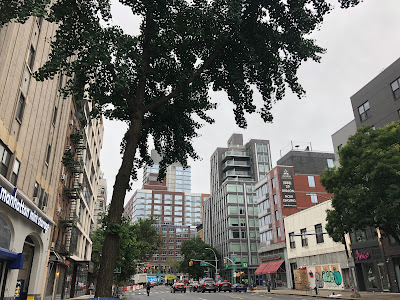 Back on Friday, we reported that Gemini Rosemont Development will build an 11-story condoplex on three properties on the east side of Second Avenue between Second Street and Third Street.

Demolition permits were filed this past Thursday to take down the former La Salle annex at 38 Second Ave. at Second Street... 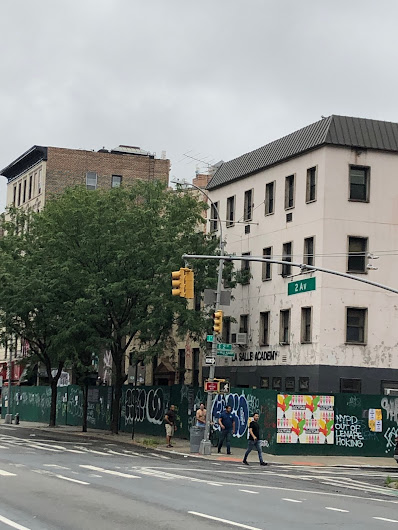 Gemini Rosemont paid more than $55 million for the three contiguous parcels, which include the former (as of July 2015) Church of the Nativity.

This project joins several others to sprout up along Second Avenue below Fourth Street in recent years... 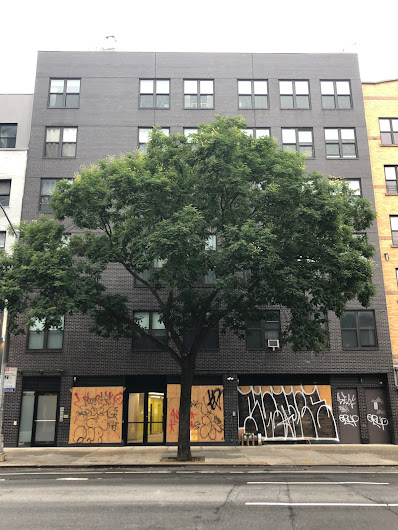 ... and there's 32 E. First St. at the site of the former BP station... the condo units here include the still-available $8.7 million penthouse... 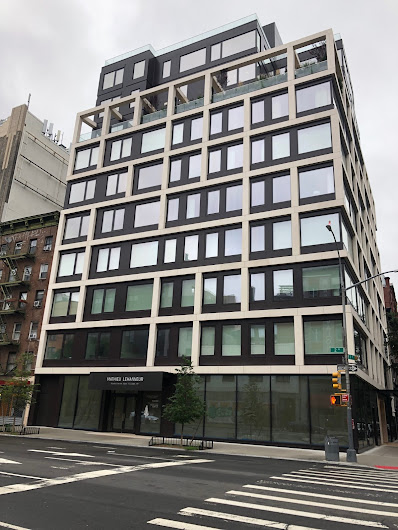 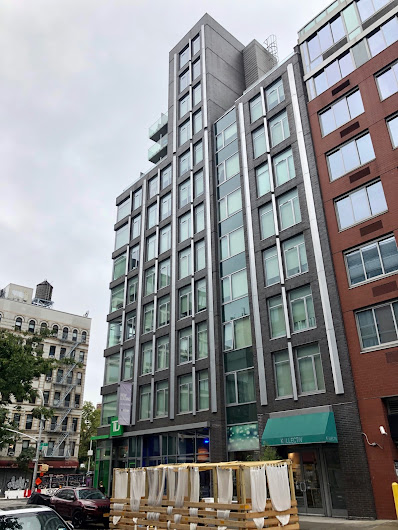 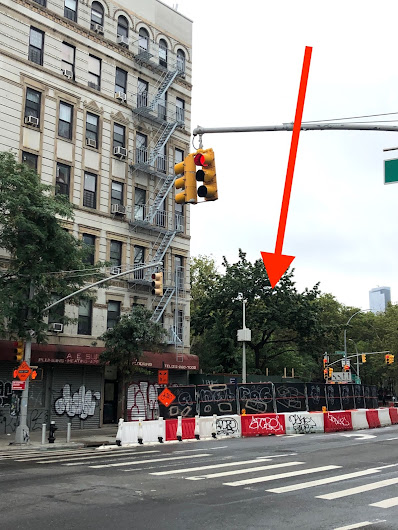 The development rush on Second Avenue, First Street and the Bowery got underway in 1997 when workers demolished the existing buildings to make way for the current Avalon Bowery Place complex... these shots by Steve Carter are on Second Avenue at First Street... 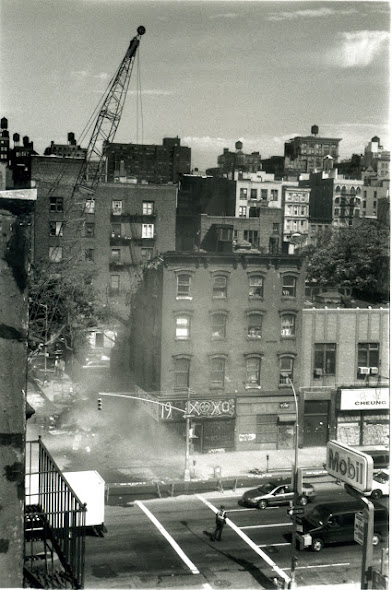 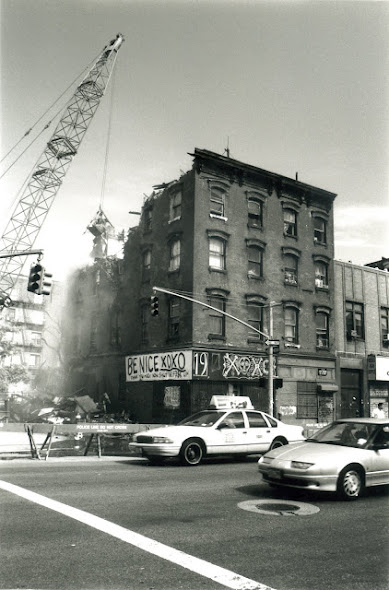 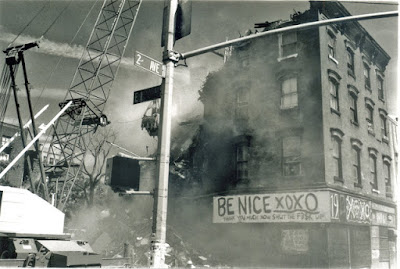 All incredibly UGLY and I have no interest in living in any of those monstrosities.

Unaffordable and ugly. A recipe thriving in NYC and destroying everything that made it special. NO character NO beauty. Junk.

Don't forget the stretch along Houston where Whole Foods is used to be a storage area for city sanitation, and the Suicide Hall building on Bowery and 1st. That whole area has changed so much, I barely recognize it. If it weren't for Anthology Film Archives, I wouldn't know where I was.

The homeless/vagrant nest at that site has simply scattered up 2nd Ave, last night they were screaming at the diners outside. That corner has long been involved tomfoolery, once saw a guy openly pass a gun there.

What happened to the 8 story limit in the East Village? I don't understand how 10 or 11 story buildings are being approved. or

Ugly and note that the ground-floor retail on those places doesn't appear (?) to have been rented, so they're street-deadening, too.

Those are some great pics, though.

I would be curious to know about the vacancy rates in these luxury buildings, they always seem half empty. there should be some law against building more if the ones in a certain radius aren't full yet. It's a sign of the obvious fact that this isn't what this area needs.

@11:35- As I've posted before a lot of luxe real estate in NYC is bought by people from overseas, corporations for temporary housing, and second homes for some. The Catholic Church might even invest in some of these units with proceeds from the sale of other properties. Rarely are these "Bro" pads. Think of them as investment properties because there's no place like NYC and the market always goes up, CV19 or not. It really doesn't matter if people are living in them.

Jupiter 21 where Mar Bar used to be...
just tells you the developers' originality and sense of creativity. Should've have named it Uranus Infinity.

And the 'creative' dept. of these developers would name the area LoSecAve -- Lower 2nd avenue.

When all these developments are done, I hope EV arrow does not get gentrified; next thing you know it'll be pointing in WaHi.

The people from overseas were mainly the new Chinese middle class, in the last decade, but that market has dried up significantly, at least for now.

This reminds me of those cheaply built new condos in Williamsburg in 2008, that got caught in the depression, and stood completely empty for 2-3 years.

It's really unpleasant to go eating outdoors all along 2nd ave from 7th to 2nd streets. Always something.

Yes, remember it well: XOXO was may place '90 -'97, a different time a different place. Those great shots
by Steve Carter, will be included in a short docu movie, titled "XOXO, UP & DOWN" coming to a screen
near you soon !!!

I always see new furniture being thrown out on the sidewalk in front of those buildings. Sofas, chairs, bed frames and mattresses all relatively new and in good condition. When I asked one of the doormen about it he said that evictions of tenants for non payment of rent are a common occurrence in these overpriced apartments which leads to the former occupants furniture just being thrown out on the street. At least it gives the homeless someplace comfortable to sleep on for a while until the NYC Sanitation Dept. finally collects the furniture.

Unfortunately, as long as the population continues to explode, we're going to need all the housing we can build—ugly or not.

Ditto on all the incredibly ugly comments concerning these incredibly ugly new condos/rental sprouting up on or near 2nd Avenue and Houston Street within 4 blocks. Very expensive, very hard on the eyes, very lifeless.

Progress is not always pretty, as evidenced by these ugly buildings. Thankfully the city set up the EV Historic District years ago (before the current idiot in the Mayor's office could do anything about it) so at least anything north of 4th Street up to 11th Street is essentially untouchable unless some idiot siphons gas and blows up the building killing people.

Hopefully they won’t do what the douchebag brothers did who renovated the 3 buildings, 50-58 on E 3rd St, across from St. Mary’s. They couldn’t build bigger because of Landmarks so they created 3-5 bedroom mega apartments that rent out For $6-10,000 a month to hordes of loud, drunken college students who add absolutely nothing to this neighborhood - and deprive of sleep and sanity.