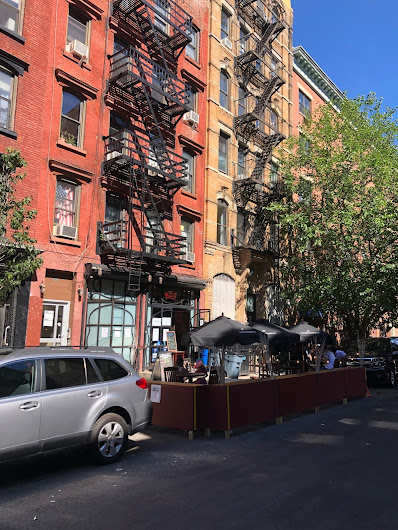 Ace Bar returned to service on Thursday here at 531 E. Fifth St. between Avenue A and Avenue B. They're open for curbside seating from 3-11 p.m. daily with a food menu that includes hot dogs.

Ace Bar, which opened here in 1992, is owned by the same folks who ran Bleecker Bar for 30 years. That bar closed on Aug. 30. "All of our efforts to negotiate a reasonable lease extension with our landlord have failed," the owners stated. They did leave open the possibility of a return elsewhere.

Meanwhile on Fifth Street... Tuome at No. 536 has debuted outdoor seating... 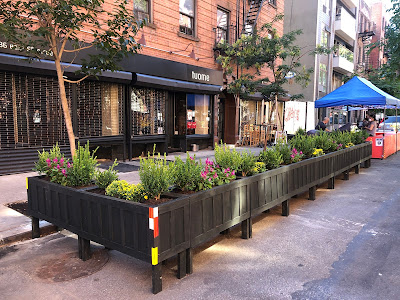 The Michelin-starred restaurant reopened on Aug. 27 for takeout and delivery. Their hours: Tuesday-Saturday 5-9 p.m.

Ace Bar and Tuome join Lavagna and Minca Ramen Factory in dining offerings on this stretch of Fifth near B.

Now if Sophie's could reopen one of these days at the other end of the block...
Posted by Grieve at 12:00 PM

It's not easy to support some of those businesses, when their operating hours are inconsistent, unreliable, or just unknown.
Looking at you, Minca!

Ace Bar has been the worst neighbor for years — never made any genuine attempt to quiet the loud drunk bros making a racket outside from midnight to 3 am. A blight on an otherwise lovely block. Not proud to admit it, but this is the only business I was relieved to see closed from the pandemic

Weird to do the seating now, they will have to take it down soon

The neighborhood once was full of drug markets, now it’s saturated with alcohol. If we get out of this with fewer bars, we’ll be heading towards a livable community.