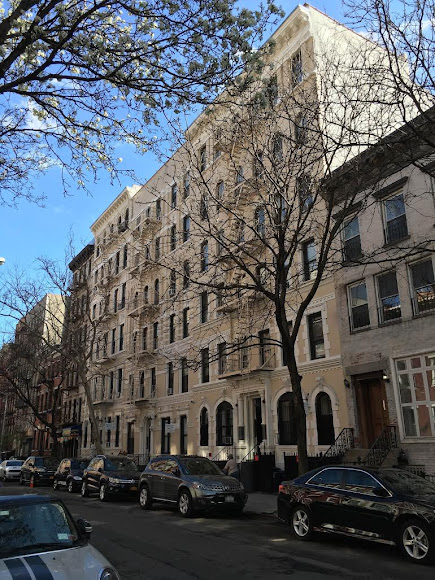 EVG file photo
Gaia Real Estate is the new owner of 50-58 E. Third St.,  the 78-unit, three-building parcel between First Avenue and Second Avenue. This marks the third owner for the properties in nine years.
As The Real Deal reported, Gaia picked up the properties for $49.5 million — "14 percent less than when the portfolio last changed hands in 2016 for $58 million."
Per TRD: "The purchase is part of Gaia's three-year strategy to snap up distressed residential buildings in a long-term bet on the city's recovery."
Let's step back several years.
In early 2012, GRJ, a fund co-founded and co-managed by brothers Graham and Gregory Jones, bought the buildings for $23.5 million.
There was plenty of drama in subsequent months as several longtime tenants lost their leases. The residents formed a tenants group; local politicians offered support during a rally in May 2012. However, as one former resident put it, the Big Real Estate Machine was too great to overcome.

After extensive gut renovations, the buildings were later rebranded the "East Village3" (aka "EV3"), where the newly renovated apartments were fetching from $4,900 to $11,000 per month.

Per Gregory Jones in the news release announcing the sale: "We see a real opportunity to reposition the buildings. We'll invest significant capital and we look forward to creating the most desirable walk-ups in the East Village."

All the capital improvements paid off for GRJ. As The Real Deal reported in the spring of 2016, GRJ sold the buildings to developer Anbau Enterprises for $58 million.
In 2016, a broker on the deal said that about 25 percent of the apartments remain as rent-stabilized units.
The new TRD article notes that the buildings "have historically housed college students and young professionals."

The 'East Village3' is ready for you; for that 'Industrial Chic feel'
Posted by Grieve at 6:50 AM

Better keep an eye on their new neighbor. The developer of the old Nativity Church has had 2 stop work orders in the last month.

I didn't know about the stop work orders on the old Nativity Church. I love this. I'm so pissed about that development. This group of buildings have been a shitshow since the rebranding. Constant party noise over the weekends and just such a change from what it was in 2012.

My block. These buildings are filled with early-20-somethings. There are large parties that spill out onto the sidewalks several nights each week...pretty much a de facto club. Noise, garbage, bottles, etc.

I hope the new owners put an end to this stuff.

My block to Anonymous! I FEEL YOU

My block #3, Anonymous 1:19pm and Steph! UGH, this building and its parade of partying shrieking baby dipwads with no commitment or connection to the neighborhood or its history. I'm coming up on 21 years (ulp) and raised two kids here; still love the EV, still believe the quirk and art and social justice are here — if less so— but jeepers fuck, i loathe these twerps and the real estate vultures who enable them...

Ronnie: The Hells Angels had their own type of noise, including loud motorcycles, and a guy who would swing & crack a whip in the middle of the street.