Activists: Pol who called Lady Gaga a slut for smoking pot must resign 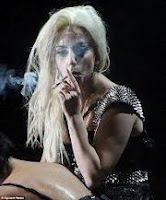 Last week, Staten Island Borough President James Molinaro inexplicably called Lady Gaga a "slut" during a youth anti-drug program, as the Daily News reported. This outburst came after the singer was photographed smoking a joint at her concert in Amsterdam.

Later last week, she revealed that she has struggled for years with bulimia and anorexia, both of which are alleviated by medical marijuana, whose use she has supported.

Tomorrow at noon, longtime activist and medical marijuana proponent Kenneth Toglia and others will rally at the steps of City Hall to call for Molinari's resignation.

Via Facebook, I asked Toglia why he is organizing the rally.

"I am promoting a common sense 'East Coast' perspective on medical marijuana: Lady Gaga recently announced she has struggled with bulimia and anorexia for years, a very brave stance, I believe, and one that shows, well, common sense," Toglia said. "When asked recently about her smoking of pot, she said: 'I want you to know it has totally changed my life and I've really cut down on drinking. It has been a totally spiritual experience for me with my music,' acknowledging something we all know but very few people are brave enough to say: that pot is safer than alcohol."

Plus: "I think the SI Boro Prez calling her a slut is scandalous and sexist."

In late 2000, the NYPD arrested Toglia for running a medical marijuana club at the University of the Streets at East Seventh Street and Avenue A. The authorities later dismissed the charges. (You can read more about his work in this article in the Voice.)

He has been working to help legalize medical marijuana in New York State. In addition, Toglia is offering a free pot-screening service at the University of the Streets on Thursday nights. Per an article from The Villager last month on the screenings, Toglia says that there is a cancer-causing fungus called Aspergillus fumigatu found in a lot of NYC street pot.

As for tomorrow's rally, Toglia is also encouraging attendees to dress up like Lady Gaga.

Lady Gaga's music and costumes and stage act are totally not my thing, but she seems like a perfectly decent person who's never done anything to offend me.

James Molinaro on the other hand clearly suffers from the sort of pathological misogyny and fear of women's bodies that forces men like him to just blurt out hateful slurs and sexual innuendo at any unguarded moment. That's sad. Cannabis might help him with that problem, but I won't be surprised if he doesn't seek treatment.

He won't resign but I hope her fans make his life less pleasant.

On the other hand Lady Gaga's act is a tired act and designed to make mainstream culture think she's weird. She's not weird.

David Bowie did a better job at this without constantly reminding his audience that he was unique and off the grid.

Is that Lady Gaga?™

How could anyone associate that term with a person so modest and dignified?

Really, when you think about it, we're all sluts. Except for James Molinaro. He's a whore (to quote Cheap Trick), because he gets paid to call Lady Gaga a slut.