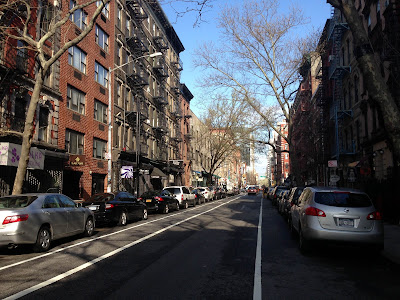 However, it's not a done deal. Ski, an assistant manager at Bleecker Bob's, provided an update. This is from Sunday night.

"Unfortunately, it's been a long ongoing process," he said of the East Ninth Street space. "At first, we were told everything should be fine and that Bleecker Bob's was the only client to be pushed for the space based on our years of business and our willingness to sign a 10-year lease."

Regardless, the wait continues for now. We exchanged emails again yesterday with Ski. Still waiting for the lease. In the meantime, Ski was busy scouting other possible locations in the East Village and on the Lower East Side.

Bleecker Bob's has also launched a crowdsourcing campaign to raise $6,500. Per Indiegogo:

Many people have offered assistance with moving expenses, relocation/storage expenses and renovation costs for our new location. So many of our friends have offered to help in so many different ways that we figured we'd bring everyone together in one spot with one goal in mind, TO REOPEN THE STORE!!!

Bleecker Bob's have a bid on space in the East Village
Posted by Grieve at 6:10 AM

Yogurt is never forever (although I've found that it usually lasts a week or two longer than the date on the carton).

Hey there is a great space on Avenue B and 7th Street on the corner facing the park that is affordable! I heard they are under $10,000.00. it used to be "Amaran" for 10 years. Pre 1997 is was "Jane's Exchange" (a consignment resale children's clothing store)which now exists on 3rd Street between B and A. The block has recently spiffed up New awnings less scaffolding, one of the best tattoo shops and Pizza Gruppo just relocated from 12th Street and B as well! Check it out!