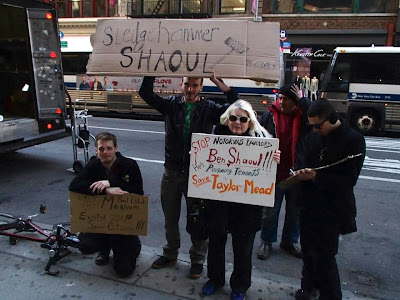 As reported earlier in the week, longtime East Village activist John Penley was planning a weekend-long campout at the offices of developer Ben Shaoul's Magnum Real Estate on Broadway. However, those plans changed, from a weekend-long campout to what Penley said would be "a meeting about the situation especially about others affected by Shaoul and his sledgehammer."

From these photos, via Facebook, you can see that several people joined Penley in front of the Magnum offices on Broadway just below Houston... 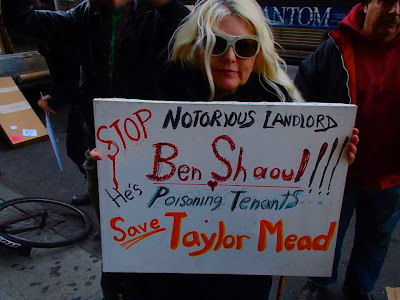 The NYPD was on the scene, though we're unaware of any actions that they may have taken again Penley and company... 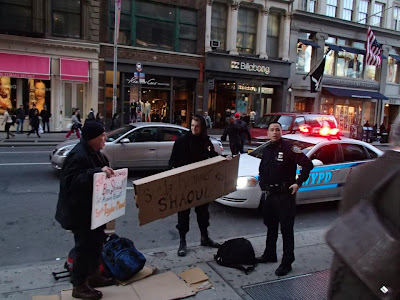 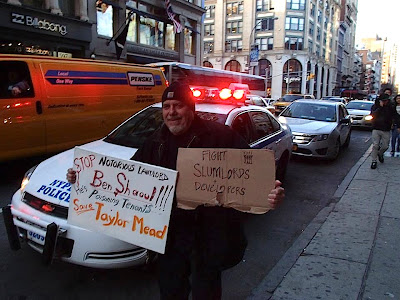 At 9 p.m., Penley planned to stop by the former the former PS 64 and CHARAS/El Bohio community center on East Ninth Street to protest developer Gregg Singer's plan to turn the building into a dorm. We hope to have more on that later.

As for the "sledgehammer" nickname, that dates back seven years... you can read background at Curbed and The New York Times.

Previously on EV Grieve:
John Penley changes plans for weekend campout at Ben Shaoul's office; gentrification meeting instead
Posted by Grieve at 7:00 AM

for charas to turn into a dorm rather than a community center would be an absolutely horrendous blow to the neighborhood. The east village is already oversaturated by obnoxious rich brats who dont care about anything other than their own vapid lives, most certainly not their "community."
STOP THE GIANT DORM IN THE HEART OF ALPHABET CITY!!!

beware a Trojan horse in the form of a "dorm" proposal...that will surely become a condo complex as soon as the "leaders" (or bought-off hacks) of the our city approve this monstrosity...and pouring forth from the innards of this Trojan horse will not be Trojan warriors, but the depressingly young and the obnoxiously cute trust-funders of NYU, etc...seeking the "coolness" of a mythical land that passed from this earth when Alan Ginsberg transitioned from this world to another reality...