Boca Chica apparently won't be reopening on First Avenue; and the return of Golden Cadillac 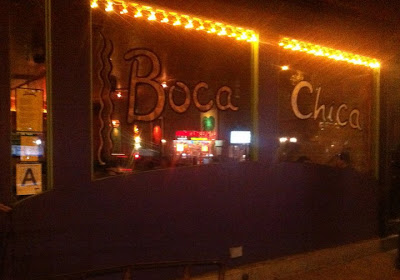 In late February, Boca Chica, the inexpensive Latin American restaurant on First Avenue at First Street, closed its doors, though perhaps only temporarily. As first reported by Serena Solomon at DNAinfo, two partners abruptly exited the business, and the remaining owner was "frantically searching for new partners." The remaining partner was hopeful to continue operations.

Apparently that won't happen here. Paperwork on file (PDF) ahead of Monday's CB3/SLA meeting show that a bar-restaurant called Golden Cadillac is in the works for the space. 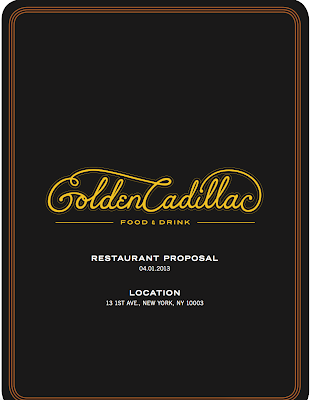 There's extensive background about the proprietors at the CB3 website. Francis Derby, who was part of the opening team of wd~50 under Chef Wylie Dufresne and a one-time sous chef at Momofuku Ssam Bar, is listed as the executive chef.

The paperwork includes a sample menu... 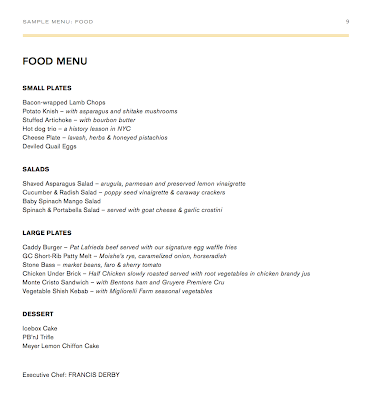 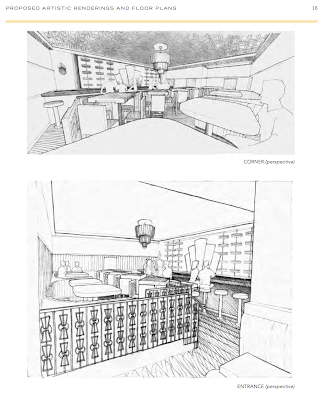 This isn't the first time that we've heard about Golden Cadillac. Time Out reported in November 2011 that the new venture from the above-mentioned folks was opening on East 13th Street between Avenue A and First Avenue. But that never materialized, for whatever reasons.

At that time, Gonzalez described the look this way: "Remember that bar called Volpe's in 'Mean Streets'? That's the way Golden Cadillac's going to look — an old Italian social club, but with tons of Art Deco details."

Boca Chica opened in March 1989. As predicted, the high-scale evolution of this corridor continues.

Previously.
Posted by Grieve at 6:20 AM

Yikes, sounds a bit pretentious for a hot dog and knish...

Wow. Hoped they'd be able to save it. Great food, well priced, no pretense.

There's only like 3 or 4 customers in their renderings. I don't see this place making it.

Hmm. Wonder if GM trademark lawyers are curious about this name.

@ Spike- Ha! I was just thinking the same thing!

Is the hot dog trio comprised of a rye pasta made with hot dogs, so with mustard sauce, ketchup and relish, sauerkraut you have a homage to the history of hotdogs in NYC?

It's getting more difficult to find a decent knish served in an appropriate NYC setting. Apparently not so tough to find them deconstructed or turned into artisanal cocktails in one of the endless parade of faboo new restaurants re-imagineered by parades of ambitious former sous-chefs of blah blah blah.

I am going to miss Boca Chica. I have been going since it opened. I am Cuban, and always loved how authentic and delicious all of the latin american recipes were. I took my mother whenever she was in town. She loved it too, and she is the best Cuban cook I know. The prices were great. As latin american food became trendy, and overpriced, this place always maintained a reasonably priced menu. The atmosphere was great too

This new place will fail. The overpriced "experimental" jewish deli thing has been tried so many times, and it always fails. ALWAYS! I wish these guys well but my advice to them is too expand the menu and offer more dishes beyond sandwiches and deli concoctions. There is room for more high end experimental restaurats along this streatch. But if they keep these menu offerings, I ll not be attending. And I am a fan of Momofuku and WD 50, and I also live around the corner

So it's a fake version of an old Italian social club with fake Art Deco decorations. Authentrification running rampant.
NYC is being "loved" to death.

Can you spell "lame" any more clearly? Who ARE these people?!

We're talkin' a couple of blocks from Katz's? and knish at Yonah S. basically across the street? And if it's faux Eye-talian social club, the restaurant formerly known as Rocco? Really, good luck.