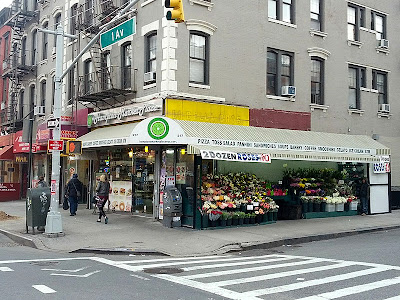 EVG regular evilnyc notes sign work over at the Hamptons Market on First Avenue and East 13th Street, which has revealed... 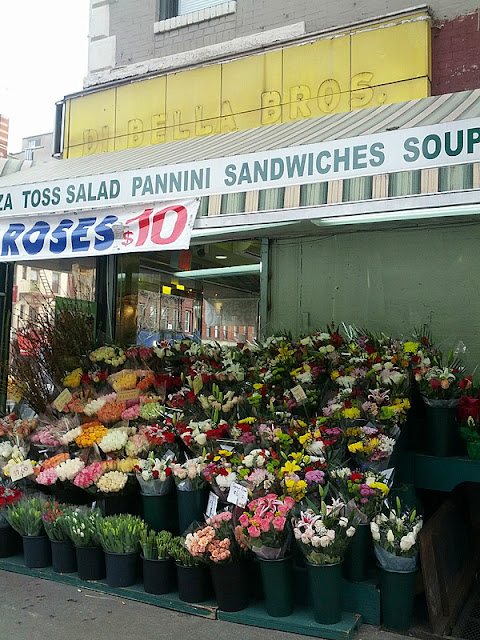 ... the name of the former longtime tenant — Di Bella Bros., which opened here in 1925... A New York magazine article from August 1984 noted that Carmine and John Di Bella retired in the early 1980s ... and that they sold the business to Sue and Jason Shim, "who have mastered most of their recipes."

Will we be talking about Hamptons Market in such loving ways years from now?
Posted by Grieve at 6:10 AM

I went to Stuyvesant (class of '86) and remember DiBella's well. Susie and Jason were some of the nicest people I ever met, they really cared about all their customers, especially the kids. They remembered me when I went back a few years after graduation. Plus, they made the best sandwiches on the Avenue by far.
I hope they are well.

I miss DiBella Brothers almost every day. The had the best Italian appetizing and cold cuts in the area. They sold Semolina flour, bread, olives, olive oil... the works, and the most amazing thing was that JaeSun and Soo mastered their recipes after apprenticing with the brothers for over 1 year before it officially changed hands.

I've never found another business that duplicated their stuffed peppers, and I've been looking all over, including Arthur Avenue.

Wonder how many people will be able to reminisce over their favorite Fro-Yo place in 40 years ?

Used to go to Di Bella's all the time. Have never been in the place since the Shims sold it, altho I do buy flowers from the side stall.

I too loved and still miss DiBella's. Their sandwiches were hands down the best I've ever had.

We definitely will NOT be talking about Hamptons Market with nostalgia as this is the deli owner that installed the ventilators on the roof that has been cited SIX TIMES for noise violations by the DEP. Somehow the paperwork does not seem to be happening to enforce the cease and desist. The deli owner is also the one that has turned off our apartments' electricity on FOUR occasions at will. I have been following through with our community board, Deborah Glick's office, the DEP records department, and we have filed lawsuits against our landlord. Still no relief yet. I miss the Korean market that followed Di Bella Bros! (They kept the name for a long time, which was always a sort of a delightful culture clash.)

No one will miss Hampton's Market!

I remember the original DiBella brothers; they loved their work and loved their neighbours. And so did the couple who took over the deli, Jason and Susie, and who were personally trained by the DiBellas. When my nephew would visit, we'd go down for sandwiches and Susie and Jason wouldn't let us leave until they'd loaded him down with all sorts of treats. Susie and Jason became friends with me and other tenants in the building: we'd have the occasional dinner together and they'd attend shows I gave. They were wonderful people.

Not so the current owner of Hampton's Market (as well as four other delis: I live in the building, and not only did he install ventilating equipment in the air shaft (which our bedrooms look out on) that runs twenty-four hours a day and keeps us up at night, he has sent threatening e-mails to tenants; has phoned us at two in the morning and hung up; and has turned off our power four times. He refuses to fix his units so his neighbors can sleep at night and concentrate during the day, despite the fact the DEP has cited him repeatedly. Susie and Jason and the DiBella brothers would never, ever have acted this way. They will be remembered with love and affection; the proprietor of Hampton's Market will be recalled only with derision and disgust.

The prices in that market have kept the DiBellas rotating

A generation of former Stuyvesant students looks back with love on the DiBella and Shim families. So many sandwiches, so many memories...

To echo what other comments have said, to be a Stuyvesant student in the late 80s/early 90s was a gift and experience unmatched. I've traveled the world, lived in some of the most interesting cities, and for the life of me none can compare to my time commuting from northeastern Queens to Stuy everyday. DiBella's was a part of that as at least once a week my friends and I would hit them up for our lunch sandwich. The sweet woman, who I've now learned was named Susie from this article, was so gentle and always smiling. Does anyone else remember the giant tub of mayonnaise with the wooden spoon?

I knew the DiBella Bros very well --- they were my uncles. I worked in their first store (2 stores from the corner) every Saturday -- not in the summers -- for 5 to 6 years. Working for relatives can have it's downside but not for me. They paid me well, treated me with respect and best of all I had the privilege of making my own sandwiches (piled high)on freshly backed bread (bakery was 2 stores away). They were very special people who treated their customers fairly and honestly and occasionally with a few jokes generally spoken in Italian -- they didn't think I understood so it was hard to hide my reactions. They were very special years for me and while going to work at a young age wasn't exactly fun it laid a great foundation for my future. Thank you Uncles Ben, John, Carmine and sometime Mike you all taught me well especially by your example. Al Jr.

I knew that store very well I lived on 13th street between Avenue A & first Avenue back in the 60's when we got out of class in P.S. 19 we stop by and we chipped in to buy a sandwich we were always short in money back then and they always cut us a break. We took our sandwich sat on the curb and ate. Those were the days.