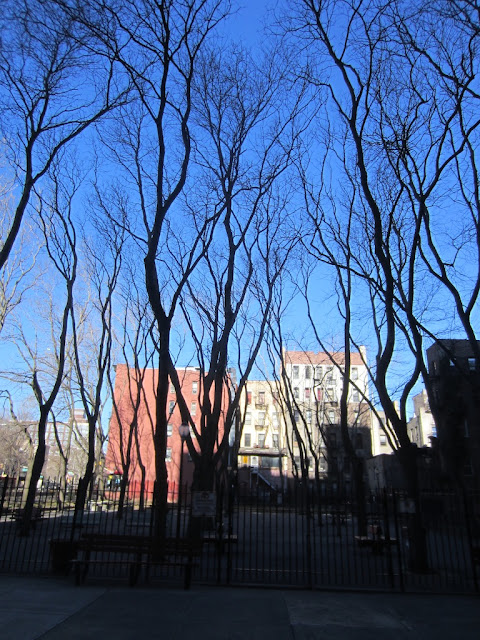 Opposition continues to mount against the city's plan to lease the park space at Max Meltzer Tower to private developers... among other things, the new development would wipe out the park at the senior citizen development at 94 E. First St. near First Avenue ... taking down 26 trees with it...

New flyers went up on buildings near Max Meltzer this past weekend... 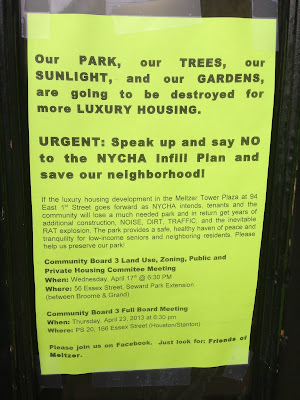 The flyers urge residents to speak out against the proposal during tomorrow night's CB3 subcommittee meeting at 6:30 ... as well as the full CB3 meeting on April 23. 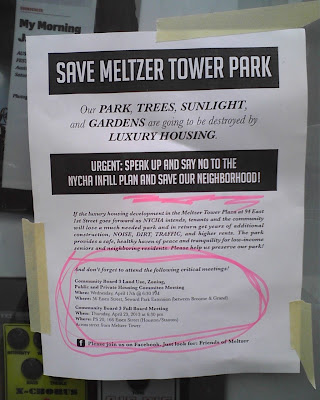 Previously on EV Grieve:
Outrage over proposal to turn the green space at the Meltzer Tower into private development (35 comments)
Posted by Grieve at 6:36 AM

The sense of entitlement of those living off of government largess rarely ceases to amaze.

@Anon 11:00 - I think, in this case, the use of the word "our" signifies a communal ownership, since there is really no way for any one person to lay claim to sunlight. Which, were you not so blatantly pro-development and anti-seniors/long-term inhabitants/lower income people, a moment's reflection might have shown you.

Take 'yer nose out of the air, 'yer blockin' the light!

But, maybe you're right.....how DARE these people even THINK about having access to sun, light, and......(Jeesus, the GONADS of some folks)....even trees and grass?

...even more amazing is the endless gaul & greed of the predatory speculators who believe they are "entitled" to take & have it all---through no sweat equity, care for community & no real efforts of their own; JUST BUSINESS---w/o regulations, the wealthy-elite$$$ greed speculators can & do abuse their privilidges & position to acquire ever more "ill-gotten' gains...be it at the expense of people, shelter or environment...simply amazing how inhumane GREED & $$$$mongers are...

more unbelievable is the even greater abuses & arrogance by the wealthy-developers and interloper-speculators.... that endlessly believe themselves entitled--through no work-efforts-community involvement or historic regard---to have it ALL...no noblese or comprehension in your judgements about the poor or working class...

Dear AnonymouASS too bad it is not our government as well.You would have made a great city planner for the Adolph Hitler. Sieg Heil !

11am does have a point, even though he didn't seem to articulate it very well.

In a society with finite resources, a safety net is weakened by resources being disproportionately used by a select few. We see this when trying to get funding for rehabilitation or job training programs (programs that show greater returns/success than more heavily funded/entrenched services).

It's not about "entitlement" or chosing one progam over another. It's about alternatives - what are you going to do with old people who can no longer work - throw them out on the street so you can have job training??? Then your logic begs the question - can't they just train themselves?

Do you know nothing about the mistakes this City made with the 5 Points? Get a history lesson!

Or, how about just ending Madison Square Garden's $16 million tax break, and we'll solve both problems.

The city is absolutely shameless in its actions. We just seem to go from one incredible loss to another .... hospitals, libraries, open spaces - the basic needs that everyone should have a right to, but these things are disappearing with lightning speed.

I doubt that apartment building will block the sun, but I know for sure that a lack of housing is a much more serious problem.

No one is talking about tearing down the building that the seniors are living in. I have walked by that "park" for 20 years and never once seen a single human being sitting in it. Open that park up to the public and turn it into a real community space, but since that apparently can't happen, then don't be shocked when developers want access to build. That space has been utterly unused for decades, and while I don't support developers by any stretch of the imagination, the general community has had years to come up with reasons to turn that into a genuine public space... and yet sat by and did nothing. Seniors are not going to lose their homes or be thrown on the street, and since none of them ever use the park, the shock and dismay in response to this are all a little hollow. All of those in shock should have been petitioning the city to make this a public access park 20 years ago. It's a little late folks.

Caleo,
People do not have to be in the park to be using its space. did you ever think why projects were built with such space to begin with? it was not because the land was just sitting there unneeded.

Instead, it has to do with what we learned from City disgraces like The 5 Points -- that people need light and air to maintain their health and sanity, so if we're going to warehouse poor and old people in big projects, cramped and stack on top of each other, then there needs to be light and air for these people to open their windows, to let in sunshine, and to have a sense of space.

Almost every large housing project in America is designed this way, and it's not by accident, and certainly not because the only need was play areas.

I hope that you'll consider the bigger picture here of the importance of national health that isn't just for the young or wealthy.

Anon at 3:54 am, another glass tower luxury housing with rents beginning at $3000 a month so that they either sit empty or flip from one rich tenant to the next quickly, no that we do not need. Nice try at conflating the message that there are housing needs with the needs for this crap

I know, 11AM, Developers, corporations and the wealthy do receive a lot of government largess. I too am tired of them thinking everything belongs to them.
Despite what these moochers of the government teat tell you, luxury housing over open park space will not help our housing crisis or bring down rents- that is a fallacy promoted by the bloodsucking developers so they can build anywhere they want.
We need affordable and middle class housing, not more condos and luxury buildings.
And to the other commenter: just because YOU don't see people in the park means the park is meaningless? what do you do, examine every single parcel of open space in the city and take a head count as you casually stroll by?
I see many elderly people and their nurses sitting outside, and I'm sure they enjoy the views and the open space when they look outside. They even let passers by sit there as I have on many a spring afternoon.